Say what you will about motion controls—and, let’s be honest, that usually tends to evoke negative connotations—there is one awesome thing about motion-controlled games that has yet to be properly mastered. Motion-controlled games are, unfortunately, more shovelware than total control, when all we really want to validate their inception is to feel like a Jedi Knight, a buccaneering pirate or a totally freakin’ ninja.

What Treyarch (yes, that Treyarch) trailblazed with their debut title Die by the Sword—a game that offered full control over your sword arm via the VSIM control system—has yet to be offered up to gamers in a palatable form. Motion-control games lend themselves to this, and Ninja Gaiden 3 had the opportunity to let you slice and dice your way through an army of soon-to-be-meat, but it falls well short of this hope.

First and foremost, the Move controls can only be used on the lower difficulty levels, which essentially summarises their usefulness. Like far too many motion-control games, you don’t actually have to mimic the on-screen prompts to perform on-screen slashes. Instead, you can lazily waggle the Move controller to boringly carve your way from A to B. To disappoint matters further, there are only a few supported Move gestures, anyway, so it’s best to pick up a traditional controller. 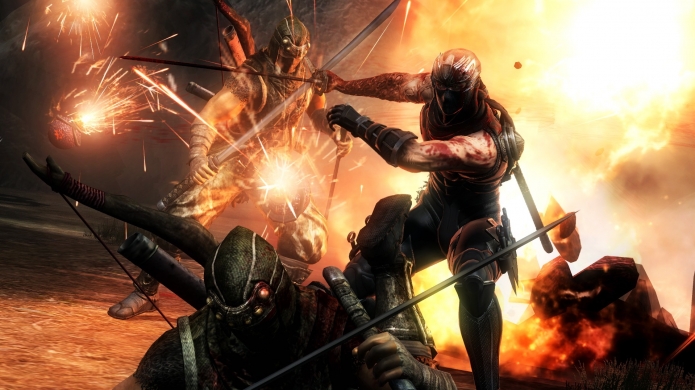 Thankfully, Ninja Gaiden 3 has a lot to offer beyond the disappointing Move integration once you are armed with a controller. Players will once again step into the sneaky boots of master assassin Ryu Hyubusa as his services are enlisted to protect the world from the usual world domination shtick. Along the way, he’ll carve his way through a whole lot of carbon-based life forms and Team Ninja will try to make you interested in the plight of a man whose body count puts all 80s action films to shame.

For me, this emotional engagement with Ryu didn’t really gel, but then I’ve never been a die-hard fan of the series, and it seemed more like it was aimed at devotees than visitors to the Ninja Gaiden world. There were moments when it almost worked—such as an instance where the last surviving peon pleads for his life, takes off his balaclava and mentions his family; but the option to spare the man was non-existent, removing any emotional weight from the scenario.

But despite Team Ninja’s attempts at emotional engagement, Ninja Gaiden’s depth isn’t located in the storyline; it’s found in the spleen of your thousandth victim. Much like the Move controls, controller-based combat is incredibly easy to come to grips with. The chances are good that you’ll master the combination of two main sword attacks, blocking, evading and ninja stars 10-minutes into the game.

What you won’t necessarily master until well into the game is the expert handle you’ll need on timing. Forget the game on Hero (read: casual) difficulty: on this mode you could quite literally button mash your way from start to finish. On Normal difficulty you’ll start to notice the challenge the more you get into the game, while Hard mode is there for those who dug the Demon’s Souls-type challenge of the preceding titles.

I bested a lot of fights on the first or second try. But the combat difficulty ramped up significantly at about the halfway point. That’s not to say that the learning curve was disproportionate to the chronology of the campaign; it’s more a case of learning to combine quick reaction times with pattern recognition. 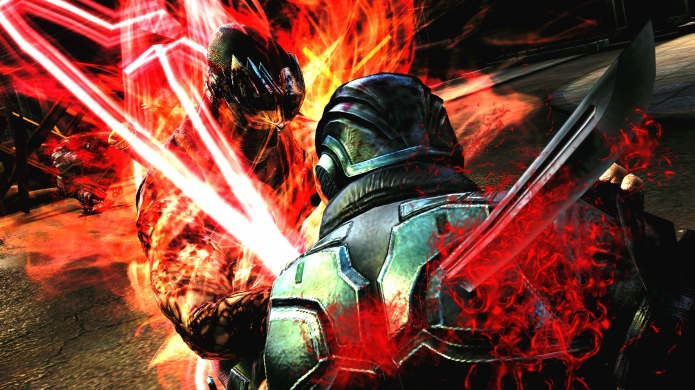 The AI isn’t terribly bright, and many of the peons are there as reskinned fodder designed to show off the Kill Bill-type blood spray when you slice them up; even if the dismemberment of Ninja Gaidens gone by has been removed. But even grunts in large numbers can be enough to force you to be more tactical in your approach to combat. Throw in some ranged rocket launcher-wielding foes, and combat scenarios can go from handled to hectic in a breath.

You can always use your slow-time auto-lock-on explosive- tip composite bow to take out ranged enemies in a single shot, but even this takes skill when you’re in the middle of a group of sword-wielding henchmen out for your blood.

The same is true of the boss fights, that aren’t terribly difficult in their composition and are super easy to determine what has to be done. But that doesn’t mean you’ll beat them straight away. You’ll still need that power combo of timing + patience to best the towering overlords, and they only get tougher the further you get into the game.

Manual targeting during combat is a bit off, while combos can be difficult to break out of, but this didn’t faze me too much as it was a constant reminder that tactics and timing are more effective in Ninja Gaiden 3 than button mashing and hoping for the best.

Team Ninja has messed around with the camera work a lot in Ninja Gaiden 3 to push the cinematic feel of the game. Usually, I hate anything short of full manual camera control, but the manual/dictated hybrid worked a lot of the time. Sure, it would still frustrate occasionally or make it difficult to track Ryu when he was teleporting mid-combo, but it helped to make bigger fights feel as though they belonged on the big screen. If only they could have achieved the same end with the Move controls.

The ‘dubbed’ lip-syncing and high-energy soundtrack make it feel like the right kind of B-grade movie, while the sexy graphics add a touch of class that’s a joy to behold. Whether running, slashing or gliding, the visuals and physics are all handled in a believable way that almost feels at ends with the abundance of over-the-top cheese. 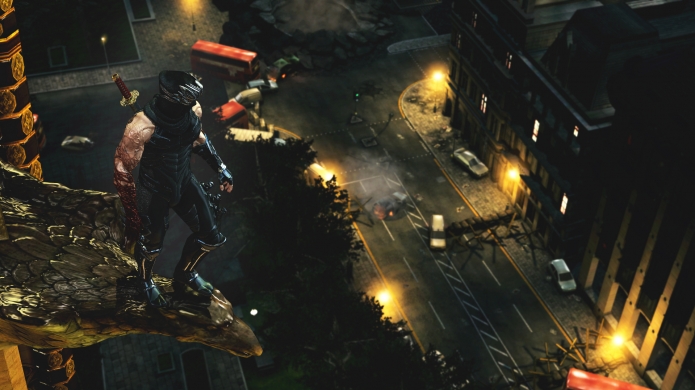 To carry the paradoxes further, Team Ninja has enlisted the vocal prowess of some talented voice actors, including Troy Baker who you may recognise as the voice of Booker DeWitt from the upcoming BioShock Infinite. The strength of the hired talent is bizarre because of how cliché and downright terrible the dialogue is at times. When you’ve got enemies yelling, “Objective updated: destroy him!” you know that things aren’t meant to be taken seriously.

Health is handled in an interesting way, mostly because you can’t collect or use potions, or anything for that matter, to revitalise. Instead, Ninja Gaiden 3 forces you to rely on your combat prowess to build up your Ki that is exchanged for health at the end of each fight, or can be used to summon an area-devastating dragon… that also restores your health.

There are some quick-time events that are more accurately describable as ‘slow-time events’, given how much time you have to perform the on-screen prompts, but they add to the fast-paced arcadey feel of the game and, thus, didn’t piss me off like they normally do. It all adds to that beautiful martial-arts-film feel when the game gets it right.

It’s a tad bizarre that the game hits you over the head with obvious training reminders one moment—my personal favourite being a dedicated button that shows you where you need to go, so you can never get lost—and then doesn’t have a system for teaching you combos or even counters. In fact, a few areas such as this feel like they were overlooked during the play-testing phase.

When the blood spray settled, though, I still kept coming back for more. Ninja Gaiden offered the right kind of challenge, even when I had to repeat fights multiple times. There were no urges to throw the controller, instead, I was motivated to perfect my timing and pick my openings, making for engaging real-time combat tactics. Ninja Gaiden isn’t a perfect experience, but it’s accessible for newcomers and boasts an addictive gameplay formula that goes a long way to forgiving its detractors.