When you think of ghosts or the afterlife, you think of ubiquitous fluidity -- whether it’s spectral or ectoplasmic, the stiff part of the person is left behind in this world and an energy is set free in another. In death, you can do more than you could in life sans tactile contact, and in Murdered: Soul Suspect, this is only a half truth.

The game, for the uninitiated, immediately projects you into the ghostly boots of one Ronan O’Connor -- a Salem, Massachusetts criminal-turned-detective who found the right side of the law after he found the right side of life in love. Losing her, though, meant he buried his headstrong noggin into his work, and this has lead to him not only being thrown out of a four-storey window, but shot in the chest with his own gun. The circumstances around this event are mysterious to say the least, and that the player is thrust into the situation with almost zero context is a bold attempt at pretexting the game’s detective themes -- in death, as in life, you need to put together the shattered pieces that lead to your demise, which is also linked to a serial killer who’s been terrorising the town this past while. 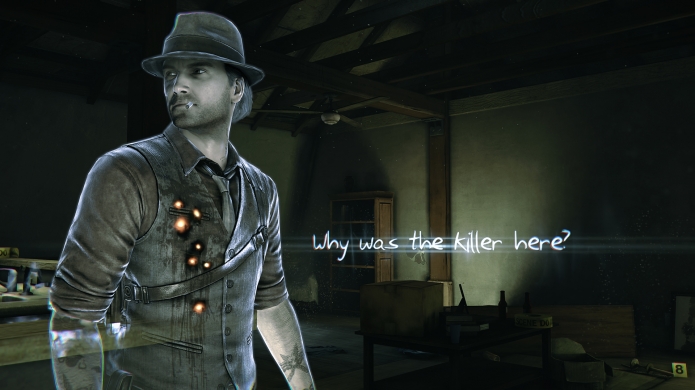 That last part is a lead-in to my biggest issue with what should have been an excellent and compelling experience. The detective component of the game, thanks largely to your new ethereal self, is a more dynamic and expanded system than the one we saw with Team Bondi’s L.A. Noire -- it’s less binary and allows for a more organic and thorough or gut-felt conclusion, but the game-world in which it’s presented is as dead as your dead body is, lying in the street.

A serial killer is on the loose and, when you take on the game, it’s nighttime in Salem. Yet people are hanging out in barely lit parks on their own, just metres from where you were shot and killed. Moreover, they only appear to be slightly concerned (though you could say they’re scared stiff).

There’s a whole town to explore as Ronan and you can leave the main story almost immediately and go out and play with your newfound powers, but it’s all very restricted. Despite your ability to move through walls, the game has placed a clever post-life rule set on the player where you can’t pass through any building or structure that has been consecrated. You’ll find imprints of death and the past riddled throughout as well, though some of these can be removed or even rebuilt, depending on the strength of the imprint. They also offer restrictive climbing or pass-through puzzles to collect any of the game’s numerous collectables or to learn more about Salem’s history but, as I’ve alluded to throughout, it’s all rather dull. 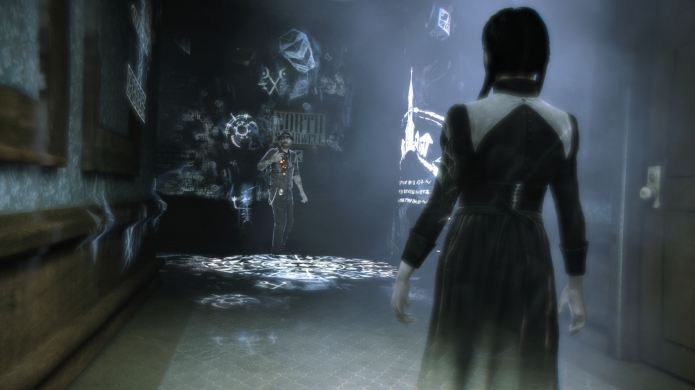 The problem is, everyone around you stays in the same spot and thoughts are repeated very quickly. Character models are recycled with no respect for the living, and any movement or life you see in NPCs is hardly worth a mention. Early on you can check in on a trio playing poker who never once play a hand. They sit there holding the same cards and tick nervously, yet consistently complain about no one actually playing. And this is a repeated pattern throughout the game -- nothing actually happens in real-time barring Ronan’s own investigation in death, and while the investigation side of things is, as I mentioned earlier, fun and compelling, it becomes increasingly more difficult to care about because, well, based on the lifelessness of Salem and its people, he’s probably better off dead, anyway.

So that leaves the detective component of the game as its only saving grace, and it does deliver the goods. Crime scenes, though static like the rest of the game world, are full of various clues and these can range in number from as high as double figures to just a handful, and you don’t need to uncover all of them to make a conclusion as to what went down. The town is full of small crime scenes both past and present for you to work, but it’s the ones specifically involving Ronan’s death or the “Bell Serial Killer” that are the meat of the game -- most others can be solved in a rather small radius of the person or ghost asking for help, or you just need to collect a specific number of items in order to unlock the story involved in the incident.

So this effectively leaves Murdered: Soul Suspect as something of an animated-in-3D-space point-and-click adventure game. It’s main plot is relatively compelling, though the peripheral information that follows Ronan’s life and love is both cliched and cookie-cutter, at best. Moreover, the stories written around the town’s history and its dark past rarely engage. There’s no real effort to capitalise on the concept -- which is one I’ve been excited about ever since the game was revealed at last year’s E3. It’s also not the best-looking piece of digital art out there. I played on Xbox One and also saw it running on PS4 and there was very little that separated either from last-gen visuals, or even Wii U to be honest. 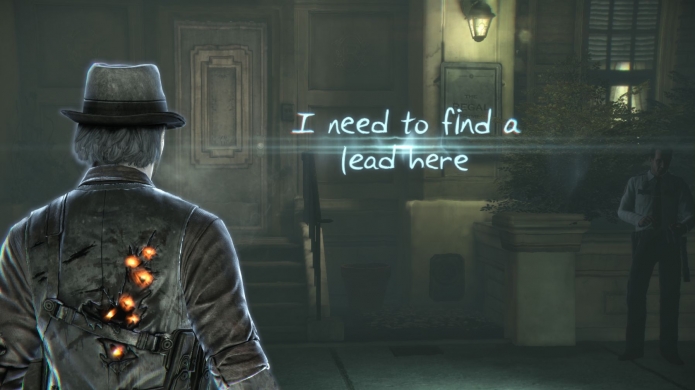 It also lacks a sense of urgency, which makes call-to-action a difficult sell. Sure, you want to find your killer, and maybe you want to stop the serial killings (though the residents are out at night and are incapable of movement, so maybe they deserve it), but there’s actually very little to care about in the game. Investigating is probably the best system of the modern gaming era here, but it’s all built around a linear narrative with little going on for it. As a detective, now dead, the first thing I did was head for the cemetery -- surely that place is full of great unsolved stories for a spectral investigator such as myself? But no, I was turned away and at that point the game lost me.

Even the game’s main threats -- vacuous demons who eat souls aren’t all that scary, and the system built around both evading them and then dispatching them is one that gives you very little to worry about. Hard-failing these also just sends you back to where you were before that happened. A more perma-death style of threat would have made sense here because, what’s to worry about when you’re already dead. I can see how this would have been a hard gameplay area to marry along with the more measured detective element, but it also sits alongside the rest of the game that doesn’t play nice with its only one strong component.

I gave it a huge chance and pushed through the bitterness of everything listed above, but it was at that point I’d detected that Airtight Games had sprung a leak in its hull, and it’s a real shame. The concept and setting here were ripe for out-of-left-field explosiveness, but due to a lack of direction and capitalisation, and likely a small budget, all we’re left with is a lifeless game that fails to live up to its potential.
Latest Comments
Link