The first Micro Machines videogame came out for the NES way back in 1991, providing excellent multiplayer with a winning formula and elimination mechanic that is still fun to play today. Thanks to the charming top-down visuals that let players race various types of vehicles in real-world environments – from speed boats in a bubble bath to dragsters racing around a toilet bowl – it stood out among a glut of identical looking 8-bit and 16-bit racing games at the time. Throw in a large selection of tracks, vehicles, and same-screen multiplayer that eliminated anyone that fell behind, Micro Machines was subsequently ported to several systems and became one of racing game developer Codemasters earliest successes for the home console market.

Fast forward, or smash-cut, to 2017 and Micro Machines is back! With the release of Micro Machines World Series for PC, PS4, and Xbox One. And with Codemasters back at the helm of the long-running franchise, one might expect a return to form for a series that has kind-of disappeared over the past few decades. Or at the very least, a nostalgic throwback to the original. Yeah, this is not that. Not even close. A misfire on just about every front, Micro Machines: World Series offers an often-clumsy revisionist take on a racing classic, with some strange design choices. Like, for example, a focus on a battle mode with vehicles that not only look different but also feature wildly different floaty controls and power-ups. Including ultimate abilities. 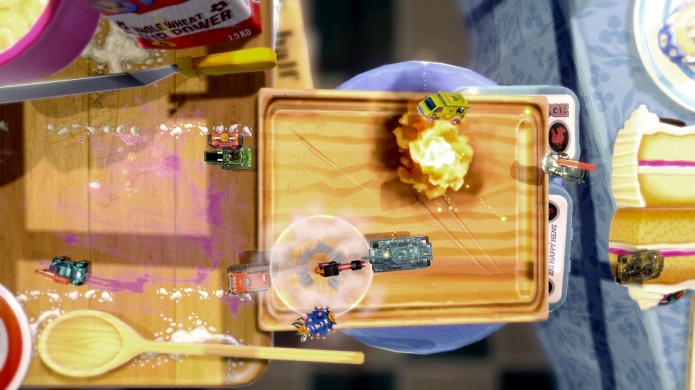 If this is starting to sound more like a hero shooter or a MOBA then, yeah, that’s the direction that World Series takes the franchise. There are even loot boxes to open, filled with cosmetic options for the line-up of Micro Machines that includes a police car, a tank, a monster truck, and an ambulance. The main menu features a surprisingly familiar setup, where upon selecting the ‘Play Now’ option you’re immediately thrown into a matchmaking queue. That’s not to say that straight up racing is nowhere to be found as you have the option to choose from either Battle or Elimination. From a franchise perspective Elimination is classic Micro Machines racing, where four races share the same screen and fight to get far enough ahead to eliminate anyone that falls out of the field of view.

But, by featuring a line-up of vehicles that all control differently, the racing doesn’t feel all that balanced when certain vehicles are more prone to slide out of control than others. Where the game does shine though is with the tracks themselves, that take on real-world locations like kitchens, garages, desks, and other locations, and inject them with a clear sense that you are indeed racing tiny cars in a much larger world. The Jack and the Beanstalk appeal also carries over to the tracks, or maps, created for the Battle mode – including a rather inspired one that takes place on the classic board game Hungry, Hungry, Hippos. 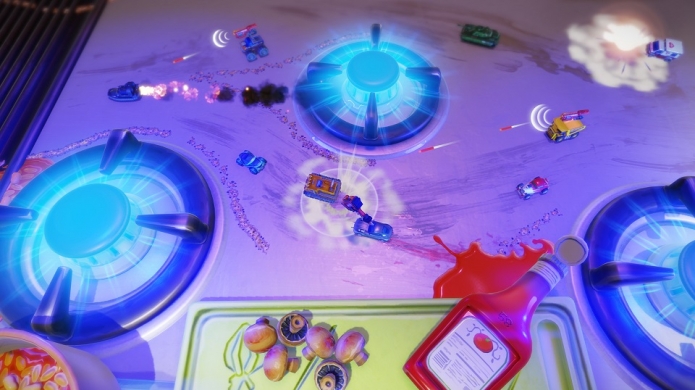 With no real championship mode, and a limited number of tracks, the appeal begins to wear thin after a couple of hours. Perhaps the biggest mistake that World Series makes is with re-imagining a classic party and same-room multiplayer experience into a game with a focus on online competition. Some types of games just don’t work all that well when forced into the mould of a character-driven, loot box collecting, quick match system. Playing Micro Machines World Series with four players in the same room is undoubtedly fun, but this option is relegated to a secondary mode with no customisation or incentive to come back when all you have are limited options, and unbalanced vehicles.