“A suit for every occasion” is really the mantra for any and all Metroid outings. Samus’ incredibly durable power suit -- a stylish AF bounty-hunter couture number made to her exact specifications, is really the centrepiece to each and every adventure we find her on. And even when her suit is down, when it’s seen its last days with broken zips, over-fluffed velcro straps that no longer stick and leaking ammo pouches more home to moths than to missiles, she pushes on until the next convenient Chozo ATM (Automatic Tailor Machine) is available. Then, once repaired and ready to dare, she moves onto the next fashionista boss withholding this summer’s must-have accessory -- a Charge Beam here, a Phantom Cloak there -- and takes no guff when procuring whichever suit upgrade it is she needs to get to her final destination.

"Adding to the murkiness of the whole situation, Samus encounters a Chozo warrior after making planetfall who attacks her...”


No Space Pirate bones about it, Samus’ suit is the real hero in the Metroid series. And in Metroid Dread, the first proper outing for the IP in over a decade, and the Switch’s first no less, her suit is Black Friday levels of desire -- a new suit, sure, but a suit for every occasion still. 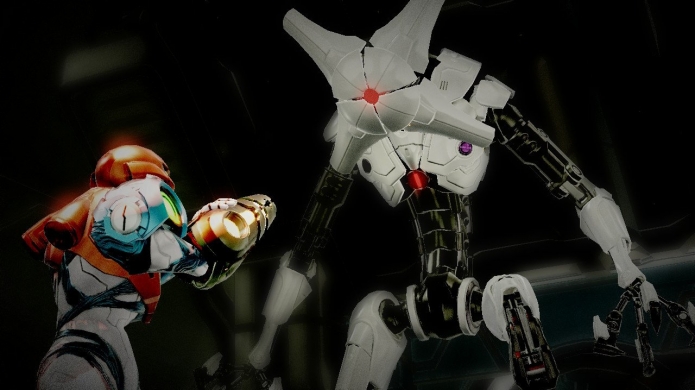 Metroid Dread sees our hero-for-hire, Samus Aran, back with her favourite (only?) client, the Galactic Federation, who have sent her to Planet ZDR (nice one, Nintendo). For reasons the game explains about as quickly as I’m about to, the planet is believed to house the X parasite of Metroid Fusion fame. This, alone, is reason enough for Samus to investigate, but further to that nugget is the idea a handful of AI sent there first, known affectionately as EMMI (Extraplanetary Multiform Mobile Identifier), have gone offline. Then adding to the murkiness of the whole situation, Samus encounters a Chozo warrior after making planetfall who attacks her, unprovoked, with abilities and an arm cannon not at all dissimilar to her own (same tailor and all). This leaves her power-reduced, alone on an alien planet and demanding answers to a number of pertinent (and now, personal) questions.

And so our adventure begins.

Metroid Dread makes you feel cool. Like, everything Samus does; how she stands, how she aims, how she spider magnets, how she slides, how she now melee attacks, how she combines slide and the new melee attack -- all of it. Every little thing, including dying, looks fucking cool in Metroid Dread. It’s fast and furiously fumbly to control at first. There’s no hand-holding in this outing, and its pacing is a fundamentally different affair to the Primes of the gaming world. You can’t scan in Dread, which is a significant disadvantage as often things are simply marked on your map as “???” leaving you no real understanding of what they are, and often how to get by them. But this is glorious design, because you don’t have all the answers, and side-scrolling right be damned; look up, down, left, right and then beyond every one of those angles. Movement and navigation of this world, particularly when you’re stuck, is the absolute key to both progression and survival.


Early on in the game I was stuck in the game’s first area, Artaria. I’d found the elevator to Cataris, but once there, every door led to areas too hot for Samus to navigate (there are extreme condition spaces in the game that drain your shield and HP until you’re dead). Back in Artaria though, I was locked out of getting back into the level proper, clearly requiring the Morph Ball upgrade. I actually questioned whether the game had broken, I was so distraught, until I just decided to shoot at a rock wall in Cataris near the elevator which blasted away, revealing an entirely safe area of the map to navigate, with a path to progress laid bare before me. The point here is even if you feel stuck, there’s a way out. You just need to consider the game in a lateral kind of way, and test and combine all of your abilities to exhaust all avenues. This is Metroid game design.

"You’ll not make a poor decision with the game’s environmental puzzles, and this was a good move on Ninty’s part...”


Almost everything you’re doing in Dread, from a perspective of functionality where manipulating the environment is concerned, such as hitting switches, blasting loose walls or draining water, is always the right thing to do. You’ll not make a poor decision with the game’s environmental puzzles, and this was a good move on Ninty’s part. Convoluting movement through the game-world, which is challenging enough on its own, didn’t need the added stress of wondering whether you’ve just made the right decision in reversing the flow of liquid hot magma (read: lava). Navigation and the successful avoidance of the rogue EMMIs is reward enough. 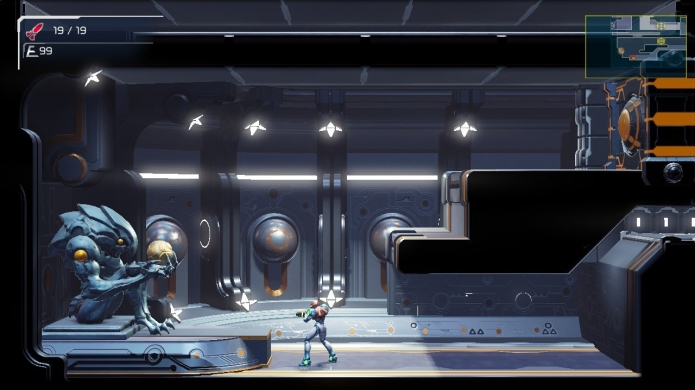 So there’s little-to-no decision making in Dread, instead the game’s emphasis is on movement through its world, as we've established. And through this, map knowledge becomes second nature, and you’ll soon learn how to feast on the respawning beasties that fill every cavity in the game. The EMMI sections of each area are particularly interesting and challenging to navigate. These help sell the game’s namesake too, as anxiety-inducing traversal through them is not only required, but encouraged. You’ll often need to use the EMMIs to help you, without their knowledge as well, and each EMMI is unique. You will actually *sort of* defeat them, despite what your AI companion ADAM says, but when, where and how that happens isn’t something concrete. Metroid Dread isn’t a paint by numbers collection of event triggers, it’s a parkour-like tour de force of player progress reflected of your mettle, ability and sheer will.

"There’s a lot of fun in either, and success in whichever approach you choose absolutely feels awesome...”


Some enemies are bullet hell-like in their delivery of offensive behaviours, while others attack aerially. Some come at you from the ground or from walls. And almost all in numbers. Each, unlike the EMMIs, however, follows a pattern easy enough to remember. Though many combine to overwhelm you with different attacks, and often in pretty confined spaces. All of which adds to how you choose to approach all corridors and bottlenecks -- do you stop and take them all out? Or do you choose to stylishly evade them all and press on to your next major discovery and EMMI checkpoint? There’s a lot of fun in either, and success in whichever approach you choose absolutely feels awesome. I haven’t played a game in a long time where the simple nature of progression through levels left me so elated. The sense of achievement in Metroid Dread, even for the little things, is absolute, and super-unique to the property.


It’s funny because so many games in numerous press releases and Albino Gorilla-laden rooftop shouts proclaim to be a “Metroidvania”, but I’d argue a lot of them aren’t even close. At least to the Metroid part of that elucidation. And Metroid Dread has reminded us all of that point. It’s a different kind of difficult to the more common “Souls-like” titles that permeate the challengescape these days, or even the bullet-hells and boss-rushes swarming in number. In fact, it’s in the game’s bosses Metroid Dread maybe lets its hair down, but that’s only because the Big N went with the third-phase boss design ethos it created, and perfected. That’s not to say they’re easy, because they are challenging, but they’re no EMMI that’s for sure.

"This is a reminder of what it means for a game to be of the Metroid half of a Metroidvania, and then some...”


Metroid Dread is the sort of game worth the decade-plus it took to arrive. On the new Nintendo Switch OLED model, which I reviewed on, it’s also an absolute showpony. At least in handheld form. But to be honest I spent most of the time playing on a larger screen, if only to enjoy the game’s stunning art, its meticulous design and the overall mood crafted here, which is an ominous one at best, and terrifying at its glorious worst. This is no Metroid Prime, and that’s a good thing. Rather, this is a reminder of what it means for a game to be of the Metroid half of a Metroidvania, and then some. That this IP exists in both the first-person genre-defining Metroid Prime series, and in its traditional 2D side-scrolling self is a testament to its flexibility and EMMI-like defiance of not being confined to a single shape.

And in Metroid Dread, you’re not only getting arguably the best Metroid game to date, but maybe the best game of 2021.