Metro 2033 was the sort of game that you’d fondly compliment with words like ‘unpolished’ and ‘messy’. There was a certain genuineness to the 2033 experience, a grimy, gritty feeling, and a sense that the developers had a very specific vision and weren’t too fussed at the compromises they’d have to make to achieve it. It wasn’t like the other shooters on shelves – it was hard (often brutally so), it didn’t hold your hand, and it had small touches of realism that made it hard to forget. Plus it was an adaptation of a Russian novel, and how many Call of Duty games can you say that about?

Games like Metro 2033 don’t often get higher-budget sequels, which makes Last Light, by mere virtue of its existence, a bit of an unexpected treat. But Last Light is quite clearly aiming at a wider audience – an audience who enjoys that things games always do now where something explodes nearby, debris nearly hits the protagonist, and then an NPC shouts at them while they try to overcome their sudden temporary hearing loss. It’s recognisably Metro, with its gas masks and portable generators and the like, but it also has the cartoonishly drawn villains, overblown set-pieces and boobs that you’d sooner expect from other shooters. 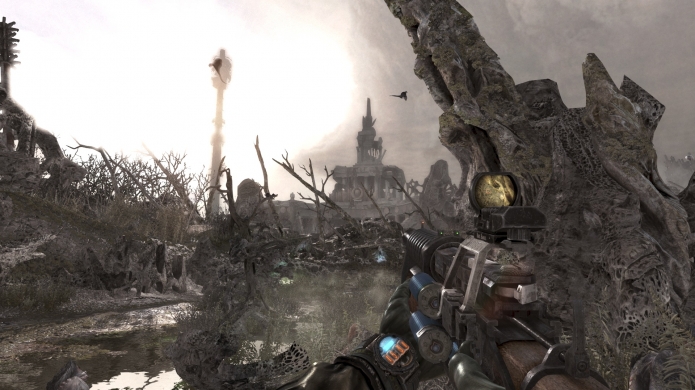 Metro: Last Light continues the adventures of Artyom, assuming that you got the first game’s darker ending (which most players did, because 2033’s morality system was extremely subtle and one sided…but also very clever). It doesn’t follow the sequel to the original book (Metro 2034, which goes off in another direction entirely), but features a unique plot that, funnily enough, lifts some of its dialog from Dmitry Glukhovsky’s original 2033 novel. If you missed the original: Moscow has, following a nuclear event, been forced into the metro stations running underground, the motherland now too irradiated (and filled with mutated monsters) to live in.

Last Light assumes that Metro 2033 – spoilers ahead – ended with Artyom destroying the ‘dark ones’, a powerful, terrifying new race that had appeared on the planet’s surface, which the player/reader comes to realise may have been a terrible mistake. The themes culminating from this decision are delved into without much subtlety in this sequel (the fact that many of the early enemies identify as Nazis is indicative of a wider embrace of being blatant). The story sends you across a wide tract of Russia, both above and below ground, and features a few fun twists before eventually delving deep enough into its own mythology to start seeming a little ridiculous. Once again there’s a ‘happy’ and an ‘unhappy’ ending, although the game sort of chickens out on its own inherent bleakness by the time you get there.

There’s a heavy – and welcome – emphasis on world-building in Last Light, on the moments in-between the firefights. At numerous intervals, Artyom puts his gun away to explore settlements, overhear long, occasionally interesting conversations, shop for guns and ammo, and in a few select cases, ruin or improve the lives of the people he encounters. Simply wandering around a well-designed area can sometimes tell you more about what’s at stake than any cutscene or forced dialog can, but Last Light has one huge, weird problem that hangs over many of these sections – in-game advertisements for Glukhovsky’s novels. 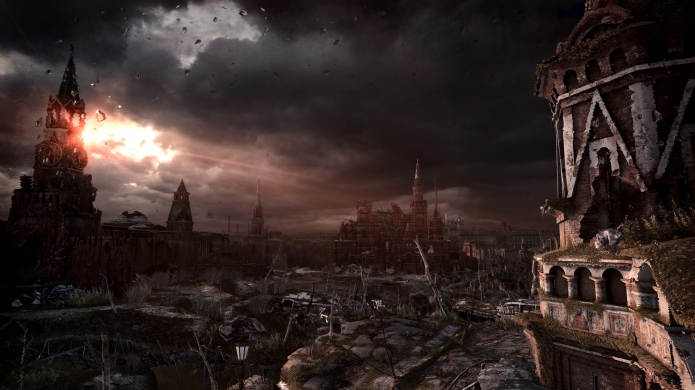 There’s a copy of Metro 2033 in Artyom’s room in Polis, which seems like a cute, albeit overdone, visual gag when you encounter it 20 seconds into the game; when you encounter Metro 2033, 2034 and 2035 on a table a minute later, alarm bells start to go off. Worst of all are the giant posters plastered around advertising the impending release of the book Metro 2035. ‘Prepare yourself for the book that will blow up the entire world’, the posters declare, complete with a URL and release date of December 2013 (keeping in mind, once again, that this game is set in a post-apocalyptic Russia circa 2033/34). This is absurd, ludicrous and awful – it’s perhaps the most out-of-place in-game advertising we’ve ever seen.

You’ll spend most of your time here with a gun in your hand, which is where both Metro games are clearly most comfortable. While there are only a handful of weapons in the game, the ways they can be customised make for a far more varied experience. Ditch your pistol for a dead enemy’s pistol and you might find that you now have, in addition to the silencer your old model carried, a night vision scope and an extended magazine; alternatively, maybe your new shotgun has four barrels instead of two. It’s not exactly Borderlands, but it doesn’t need to be, and getting to grips with how new guns handle is one of the game’s most enjoyable aspects.

There’s an even split between human and mutant enemies here, and you spend a surprising amount of time above ground this time around. Being on the surface requires wearing a gas mask and finding air filters, which can lead to some incredibly tense moments as your oxygen starts to run out in the middle of a fight, but towards the end of the game you’re spending so much time up there, and finding so many filters on the bodies of your enemies (if you’re not trying to ghost through the levels, which you don’t need to because being a stealthy assassin is incredibly easy – more on that in a bit) that the novelty starts to wear off a bit.

The mutants that live on the surface and in certain parts of the metro don’t always make for interesting opponents, either, generally attacking in the same patterns over and over until you’ve sufficiently riddled their faces or soft spots with bullets. There’s one interesting enemy early on that can only be hurt if you’ve shone your flashlight on it sufficiently, Alan Wake style, but they’re an exception.

Your encounters with armed soldiers tend to be more interesting, in that there are often fun, albeit overly easy to execute, stealth options available. 4A Games have cooked up some really great areas, full of shadows and light-sources and multiple high/low positions to make use of, and then populated them with largely stupid, seemingly blind enemies. When things go well, you don’t so much feel like a predator as the Predator, able to indiscriminately and silently murder while the soldiers quake in their boots, unable to find you if you’re not directly under a beaming light.

But enemies can overwhelm you by sheer number, and when things do go wrong it’s very possible to fight your way out of a situation and reclaim the darkness, which is a lot of fun. Still, this is a substantially easier game than the original – even on Hardcore difficulty – which makes it extremely disappointing that the much harder ‘Ranger’ mode is only available as DLC, made free to folks who preordered the game or available online for a small fee. Considering that it’s a thing that affects the entire game, and not something you can really decide you want to use on a first run-through without trying it out first, it’s a disappointing omission, and a grim sign of where things are headed with DLC in general.

It’s also worth noting that, in the PS3 version we played, audio glitches were extremely common. The game looks great on consoles, substantially more polished than its predecessor, but we had multiple issues where audio would cut out or dialog would repeat several times. From what we’ve heard this doesn’t seem to be an issue for the PC version, at least.

Metro: Last Light is a fine shooter, an exciting, fun ride, but it’s not necessarily the Metro game we wanted. We miss 2033’s punishing difficulty and its willingness to experiment, to make you suffer, to pull you down into the mud its characters spent every day in. But for many, Last Light’s changes will simply make the experience less intimidating and more enjoyable, and it’s hard to begrudge the game too hard when it’s still delivering such a fine experience.
Latest Comments
Link