Genuine surprise is a rare commodity in a modern-day shooter, especially when it comes to titles that focus on the single-player side of things. And that’s surprise not in the jump-scare, or ‘hey, this turned out a lot better than expected’ sense. It’s genuine surprise that comes from an in-game moment or mechanic – something that not only hits you off guard but then triggers a singular or series of emotions and reactions. Excitement, awe, fear, catharsis. Contentment. Satisfaction in you own abilities, borne from a deeper understanding of the world, the rules, and dangers. Pleasure.

In Metro Exodus, this translates to an impressive number of moments. Attacking a pair of four-legged Watchman feasting on a frozen corpse, only to have one howl - calling in a larger pack that begins to hunt and attack as a coordinated group. Deciding to infiltrate a bandit camp at night, only to witness what looks like ball lightning emerge from a lakeshore. Keeping your distance, you then watch as it attacks mutated creatures in a sentient fashion. Hearing monstrous wailing and moaning, only to see a whale-sized carapace emerge ever so slightly above water and then submerge back into the freezing abyss. We could go on. 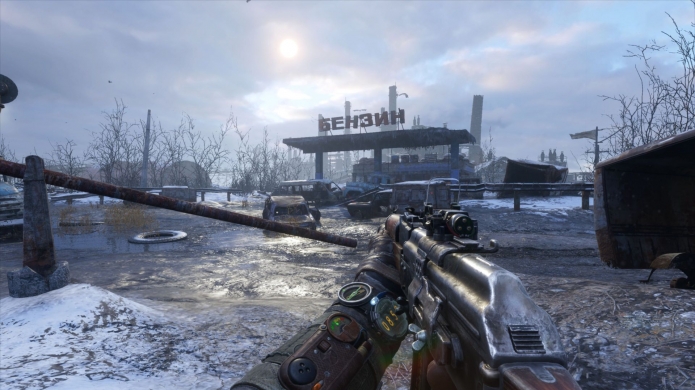 Metro Exodus is a genuine surprise for many reasons, most of which come down to it nailing challenging and strategic combat, stealth infiltrations, creepy survival horror and wide-open exploration and discovery. Although cliché it is one of those games that although we’d love nothing more than to list and talk about all the cool moments, story beats, and surprising encounters - doing so would spoil, well, the surprise. The fact that Metro Exodus manages to strike that delicate balance between shooter styles, means that it slowly but surely ends up feeling like its own thing. That said, for the quick and obligatory surface level comparison – it’s a dash of Fallout, a sprinkle of BioShock, some Dishonored for flavour and Thief to darken the edges.

Yet still, all Metro Exodus.

"It’s a dash of Fallout, a sprinkle of BioShock, some Dishonored for flavour and Thief to darken the edges.
"


An experience that lives up to developer 4A Games’ lofty ambitions for what is the studio’s third and most ambitious game in the Metro series. One that eschews the claustrophobia of the first few games to present a rich narrative that takes place over the course of an entire year. No matter your awareness or familiarity with the series, and no prior knowledge is required before jumping in here, Metro Exodus is, well, next level. It’s cinematic, presenting a journey about companionship and destiny whilst still injecting you with regular doses of stark post-apocalyptic isolation and pure terror. It looks stunning too, rivalling bigger budget spectacles from some of the largest publishers in the business. 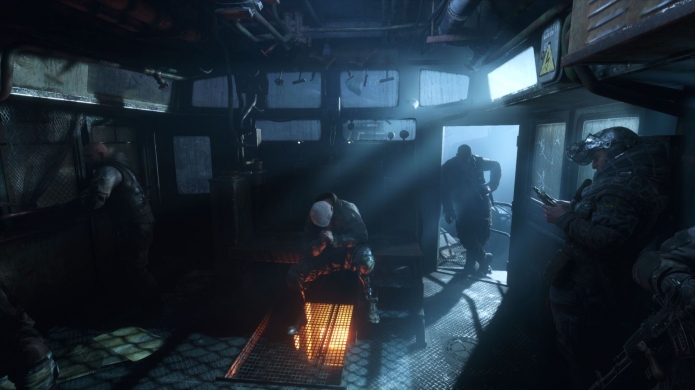 Not only from a technical perspective but across art direction, animation, and real-time cinematic sequences. Even so, it’s the little things. Subtlety is what gives Metro Exodus that feeling of something truly special. The way humanoid mutants walk on all fours like a man or woman imitating a large ape. It’s impressively creepy. Using your hands to wipe away debris or condensation or grime from your gas mask, patching up a hole with a piece of tape. The lack of permanent or semi-permanent hud elements. Knocking out an unbeknownst and whistling bandit and hearing him bellow a monotone whistle as he falls to the ground. Watching human enemies kneel and surrender based on how well you take out their, for the lack of a better term, comrades. Seeing all pertinent information completely within the game-world, as protagonist Artyom carries a map on a folder with the alternate side listing his notes-slash-mission-objectives.

This visual in-game communication is carried over to weapons and modding and crafting - with DIY post-apocalyptic gun maintenance resulting in ripping off a mod from a fallen enemy’s rifle and then elbow-greasing it on top of your own.

Created and running on the Ukranian studio’s own internal 4A Engine, Metro Exodus scales remarkably well too. Retaining the core desolation, decay and beauty of its world no matter the platform. On the higher end, and for this review we played through the campaign on an NVIDIA RTX-powered rig – Metro Exodus shines brightest. Sometimes literally, where on PC with an RTX card, cutting edge real-time ray-tracing is used for global-illumination. A PC and currently NVIDIA-exclusive feature that gives the environments in Metro Exodus seamless and subtle authenticity. The look of a film, that may take a second glance to realise what’s happening. Across several indoor locations there are some pretty drastic improvements. A true glimpse into the future of gaming.

Speaking of the future, somehow, we’ve gone this far into the review without stating that Metro Exodus takes place in the post-apocalyptic setting of war-torn and nuclear-ravaged Russia. In a story based on the Metro novels from writer Dmitry Glukhovsky. Offering large, open areas to explore across different Russian locations — and even seasons that aren’t winter — in some ways Metro Exodus feels like the inverse-Fallout – mutants and decaying government installations, but satire-free and full of the bleak understanding of humanity’s frailty. The cornerstone of Russian literature.

"Subtlety is what gives Metro Exodus that feeling of something truly special."


Ahem. Only sort of though. Metro Exodus does take a while to get there, but never fully does. The opening hour is mostly linear, scripted, and truth be told: shallow. And there are some moments and sequences when it’s action-movie ambition feels like it’s underselling or moving a little too far away from the better stuff. The borsch and potatoes.

Once you get to head out on your own for the first time, Metro Exodus truly comes alive.

Going back to the excellent animation, which also applies to the humans you encounter (both friendly and not-so friendly), it’s a sentiment that is also indicative of the world and setting. A marriage of technical beauty and thematic weight, where you can catch a glimpse of what might have been before walking through the ruins of a large warehouse overlooking a once bustling port. 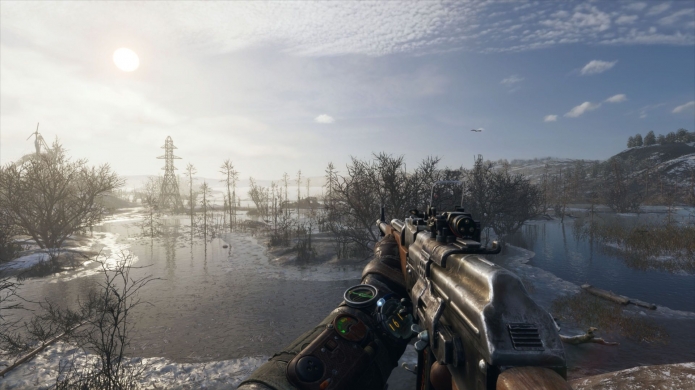 An intricate and realistic port that also ends up becoming the setting for a large-scale battle that presents one of the early mission-based highlights – in a sequence that doesn’t feel in anyway like a separate or linear level. Even though it mostly leans that way. In the larger areas nothing ever feels tacked on, even when stuff gets action-heavy. The sizes may not be to the scale of some of the massive open-worlds we’ve seen recently, but the sizes are large enough to both sell the danger borne from the challenging and rewarding combat as well as the feeling of being alone in a harsh environment.

How Metro Exodus dances around its various styles is a masterclass in design; offering variety through never repeating the same thing twice. Exploring a dangerous icy wasteland, making discoveries whilst barely surviving can lead straight into a linear survival horror ‘level’ full of shadowy jump scares, creepy monsters, and an environment that tumbles and falls as you dash towards an escape. Even when one bit doesn’t quite feel as great as another, it’s never a chore, boring, or repetitious It’s the sort of setup where variations on a theme feel fresher for longer – where that earlier reference to Metro Exodus comprising of ‘a sprinkle of BioShock’ was borne from it being the single most memorable, rewarding and enjoyable single-player first-person shooter we’ve played probably since that seminal release. 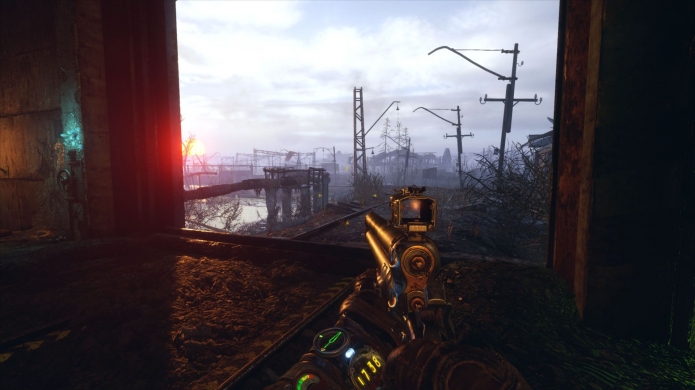 The shotgun is amazing.

Okay, so there’s no real segue-way there. But an amazing shotgun that reloads and fires off quick rounds and looks unlike any videogame shotgun we’ve ever used, plays into the one area that any shooter needs to nail right from the get-go. And that is, the shooting. The gun-feel, the weapons, the variety, how they impact combat. Sniping an enemy from a distance, sneaking up for quick neck stab, unloading a sequence of buckshot to take out two mutants running towards you - single file. With resource management, crafting ammunition and healing items always a concern, it’s strange that Metro Exodus offers no real, proper, save system. Outside of auto-save checkpoints you’re allowed one quick save and that’s it. Sure, it adds to the tension by pure simple omission but when a checkpoint save happens right before combat and you’re low on health and ammunition - it can add unneeded frustration.

A minor gripe, in a series of what are minor issues found throughout Metro Exodus. Sometimes clunky writing and cheesy voice-acting, the odd enemy that glitches out animation-wise, a story sequence that doesn’t trigger forcing a reload. Stuff that, like the mask mechanic found within, dissipates after a good wipe of the hand. Metro Exodus is without a doubt a fantastic single-player story-driven shooter. An experience that lives up to its ambition and promise, offering challenge and surprise in equal measure.
Latest Comments
Commenting has been locked for this item.
Follow Us
Latest Reviews
More...
News Feed
Advertisement
Latest Threads
Log In
Create Account | Lost your password?