Over the last couple of years it’s become rather trendy for gaming critics to slag off linear first-person shooters. If it’s not being used for a sandbox experiment in emergent gameplay, as seen most recently in Dishonored, the first-person perspective found in rollercoaster shooting galleries is deemed unworthy of gamer attention. I don’t subscribe to that perspective. Walk into any real-life carnival or fairground and you’ll see the most popular attractions are the rollercoaster and shooting gallery, and I think a lot of us find the same enjoyment in blockbusters like Call of Duty or Battlefield. Most gamers like a bit of dumb fun that doesn’t require Mensa-levels of intellect to penetrate, and I was one of the few critics who found the last MoH a decent first-person romp.

With that in mind I had relatively high hopes for Warfighter. After all, based on the many sequels I’ve played over the years, it’s become pretty standard to expect the follow-up to improve on the last game in every way. This is why Warfighter is so baffling – rather than learn from the mistakes of the last game, the latest entry makes an entirely new bunch of SNAFUs that we’d expect from an FNG rather than a combat veteran.

The most concerning is the act of firing the weapons, the most fundamental element of any decent shooter. Warfighter gets a few things right, and one thing spectacularly wrong. Sound effects are inspired by the Hollywood weapons range, with the realistic cap-gun pops and cracks of a real-life weapon replaced by booming Howitzer explosions for even the smallest 9mm handgun. I’m totally fine with that though, as that’s what gamers have been groomed to expect. Feedback from firing is helped no end by the destructible environments delivered by the Frostbite 2.0 engine, though not quite to the same level of Battlefield 3. It looks and sounds great, but aiming itself can only be described as horrific. You see, Warfighter has a very particular issue that is found in very rare cases of terrible coding; when aiming, the crosshair jumps from blocks of pixels to the next, rather than smoothly panning across the screen. It’s hard to explain, so I’ve captured this video of the issue:

Now, I play a LOT of shooters, and none of them exhibit this problem. I fired up Call of Duty and Battlefield immediately after playing Warfighter, and both were as smooth as silk. This jerky movement makes aiming a clumsy affair, and it’s present in both single-player and multiplayer. To get such a fundamental issue so wrong is unforgiveable.

EA made a huge deal about Warfighter being built on Frostbite 2, the same engine used in Battlefield 3, and for good reason – BF3 on the PC is quite possibly the best looking game in existence. Sadly it appears that those good looks are more about the talented folks using the engine to craft a game than the engine itself, as Warfighter doesn’t come close. Some of the single-player sections are relatively impressive, but all too often the player is presented with a tiny area filled with very basic buildings, ignoring the engine’s long draw distance strengths. Occasionally it’s used to serve up a driving level, where the struggling frame-rate indicates a mismatch between developer intent and engine ability. Multiplayer is even more disappointing. It’s uniformly ugly, looking like a very basic console game ported directly to PC, failing to even match the aesthetic appeal of the technologically inferior Call of Duty series.

The lacklustre visuals could be easily ignored in single-player if the gameplay was enough to compensate, but Warfighter takes a huge step back from its predecessor. I have fond memories of watching an – albeit heavily scripted – AC130 gunship attack and other bombastic scenes two years ago in the first MoH reboot. Yet after completing the six hour campaign of Warfighter, I struggled to remember any eye-gouging set-pieces, just a few days later. If a shooter adopts the linear rollercoaster approach, it needs to be the equivalent of the Jurassic Park ride at Universal Studios, with vast environments packed with giant automatons and a dizzying array of special effects, but the ride on offer here feels more like a 30 second spin on a rickety coaster at your local Easter show. It’s got nothing on the non-stop set pieces of Call of Duty.

Then again, neither does Borderlands, which instead abates boredom by serving up fiendishly clever AI, making each firefight an interesting experiment in high-velocity manipulation. By comparison Warfighter’s AI-controlled troops appear to have been recruited from the cast of Hogan’s Heroes, providing a pathetic representation of the lethal skills that real special forces soldiers use. It’s not uncommon to watch friendly and enemy AI battle it out for minutes within spitting distance, neither side smart enough to actually aim their weapon. I also lost count of the number of times my teammates boxed me into a piece of cover, making it impossible to move until they’d stopped hugging me.

Even the storyline is a huge step back, despite it being one of the areas earmarked for improvement. I find it hard enough as it is to identify with game characters due to their robotic features, so when a game like Warfighter bounces between personalities like a schizophrenic off their meds, it soon became impossible to know just what the heck was going on. It had something to do with the (obviously) evil Muslims/Arabs of the world planning to blow up an American landmark and thus threaten world peace, but by the end I was simply heading for the next waypoint with no idea why. 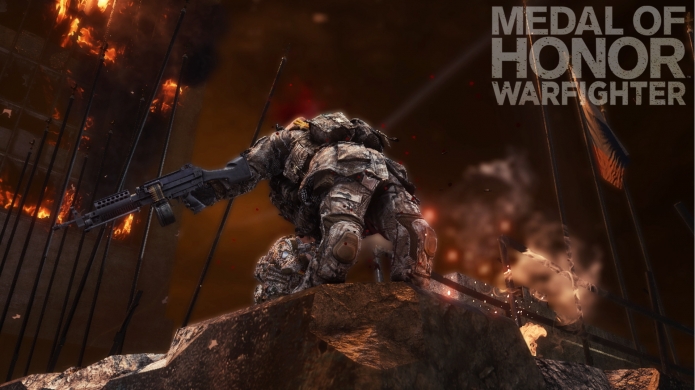 Rounding out the disappointing single-player is a clusterfudge of an online mode. Saying nothing about the horrific lag problems (why can 64 player Battlefield 3 run great on this engine, yet Warfighter can’t handle 20?), Warfighter’s multiplayer is a mish-mash of great ideas, poor implementation and lack of experience. The buddy system is a great idea, where each player is automatically squadded up with another player, as forming a personal connection on such a small scale is easier than with a larger fireteam. However, one of the most confusing user interfaces I’ve ever seen hides the deep upgrade system, while extremely lacking map design sees most games devolve into a series of stalemates around the few chokepoints. Snipers seem incredibly overpowered, taking down targets with a single shot while lowly assault rifles can empty an entire clip without a kill, probably a result of the severe network issues.

There are a few extremely brief moments of promise in Warfighter – clearing a village from the side of a little bird with a sniper rifle and a high speed chase through Dubai are two areas that almost managed to be exciting. Unfortunately they’re surrounded by too many moments of bog-standard room clearing to matter, and the entire package is let down by one of the clunkiest online modes in recent memory. I’m not sure where EA went wrong with this game. Perhaps removing DICE from crafting the multiplayer mode left Danger Close stretched too thin to handle both sides of the coin. Whatever the reason, EA either needs to bulk up the studio with more talent or kill the series entirely. After the dismal reaction from the public to Warfighter, the latter may have happened already.