I could have started this review with a cool film noire-esque intro. I could have pretended I was an undercover journalist on the beat, walking through a snow-covered New York strip wondering where my old pal, Max Payne, was. His life, torn asunder over and over again, could have been a metaphor for capturing the perfect story; a revenge tale not at all unlike the one Max himself hoped he could write in blood, and follow up with a sequel. I could have thrown myself -- pen in hand -- through the air to dazzle in stylish spectacle.

I could have talked readily about sipping on my seemingly bottomless glass of beer as I stewed over the best way to present Max Payne 3; a new chronicle in the life of one of gaming’s most troubled characters, and I’d be right. At least about the beer and stewing part. But I stopped short of recording some saxaphone to accompany this review, because all of the Max Payne bells and whistles -- the kind of stuff we’ve seen delivered in each iteration of Max’s troubled life, and then so much more beyond gaming before that -- is covered here. 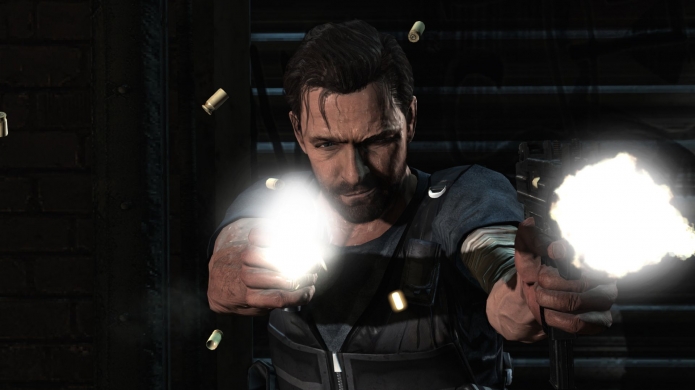 If there’s one thing Rockstar has nailed with Max Payne 3, it’s tone. From the game’s outset the team nail the feel of a Max Payne experience, without ever once looking like they’re trying to recreate Remedy’s magic. In fact, like most Rockstar games, Max is an inbred evolution, if such an oxymoron could ever exist, but for this team, it probably should.

I say inbred because this feels like a Rockstar game. So if you’ve never played Max Payne before but have played the likes of Grand Theft Auto or Red Dead Redemption, you’re going to be right at home here. I also say evolution because Max Payne 3 takes all of what made the previous Max efforts so engaging, and contextualises them in a modern way, while maintaining a sense of action and narrative throwback I can only find evidenced in one other videogame: Mass Effect, with its dizzying lens-flare and unrelenting synth (of which Max also dabbles, successfully in). But I digress.

Max Payne 3 is also a pain in the ass. While the game itself is a measured triumph on so many levels, the inbred nature of most Rockstar games leaves a few design decisions to be desired, and it can reach fever-pitch in terms of its frustration levels, especially for those of you who spend your gaming time in the Hard, Hardcore, Nightmare, New Game + neighbourhood of things. While Max certainly isn’t a specific third-person cover shooter by trade, like the aforementioned Mass Effect, he spends much of his time dabbling behind objects that do stop bullets in their tracks, though unlike that game there are a few basic oversights - the first of which is speed. 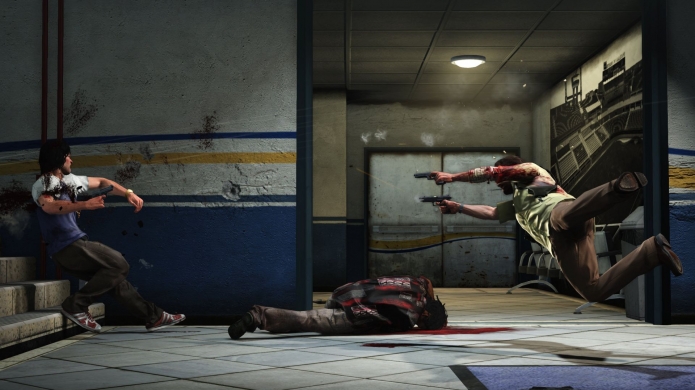 You could argue that there’s a contextual reason for Max’s overall sluggishness in Max Payne 3, but I feel the team just overlooked the bridging component of much of Max’s sheltered life. For example, if you’re facing enemies and one gets the drop on you (which happens quite a lot on the hardest difficulty setting), and you have either enough health left or a painkiller in your pocket, you’re rewarded with an opportunity to take the guy down in typical Max Payne bullet-time, and live to fight another day. However, when you take care of said guy, if you were behind cover, you’ll snap out of the bullet-cam to find yourself lying on the ground either prone or on your back. Now, depending on how far you are from cover, Max’s movements from his new horizontal nest to snapping back to cover are so slow that there’s a good chance you’re going get clipped.

The context argument also fails when you consider that Max can dive, rather ceremoniously, through the air and nail as many guys as your quick hand, trigger finger and reticule can find within seconds, suggesting he's more nimble than he looks, or lets on.

There are also some serious issues with Checkpointing, once again. And while we know Rockstar aren’t overtly renowned for the greatest Checkpointing system in games, I thought they did a decent job in Red Dead Redemption, unfortunately with Max, they’ve slipped back into GTAIV territory, adding to the already high-tension levels of frustration on offer throughout Max Payne 3. 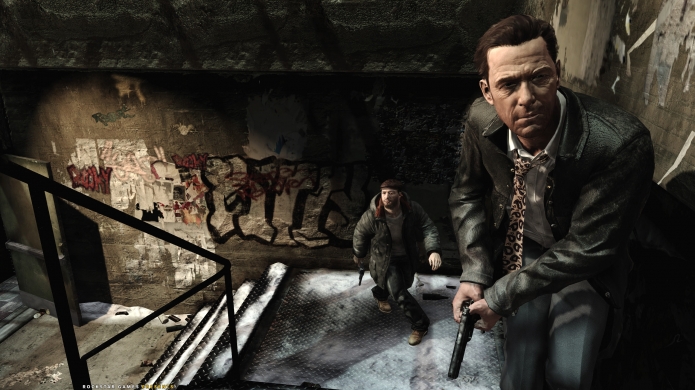 But, let none of that be a major deterrent. Max Payne is a package and a half, and also represents a massive leap forward, visually, for the Rockstar bench. The environments throughout are some of the most detailed I’ve seen in a long time, and even on the review platform I played the game on, Xbox 360, I was constantly dropping my jaw -- it’s simply breathtaking.

Euphoria physics are back once again, and this time they’re used to equal parts gain and detriment. The detriment comes in the sensation that maybe the animation and skeletal system of that technology now just feels a little sluggish, and even though you’re bound to be spending most of your time flying through the air or, down a set of stairs, in slow-motion, it just doesn’t feel as responsive an animation system as something as twitch shootery as Max should feel. On the plus side for the animation tech, cut-scenes and death sequences are always fun to watch, and it never gets old watching characters imbued with Euphoria climb ladders or descend stairs.

Specifically, in Max Payne 3, Euphoria often helps sell Max’s own waning health; his inability to run far, jump high or deal with high-pressure situations comes through in spades because he's animated so well. It’s just that cover and intensity could have definitely done with a more robust marriage, and as it stands, they just don’t help much when it comes to selling the game’s over-the-top heroics. 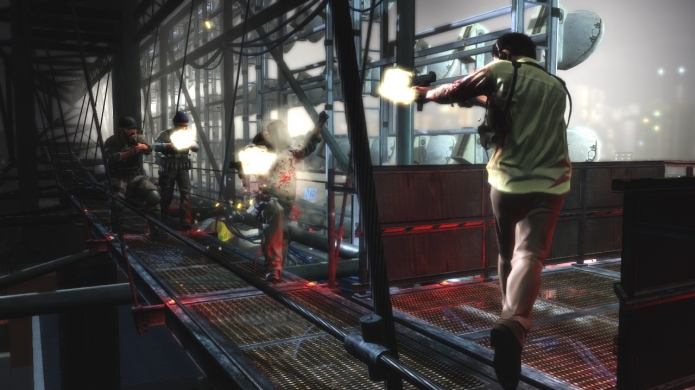 In keeping with the full package component though, single-player aside, Max Payne 3 also offers bragging rights champions out there a chance to really show who has the skills to shoot the bills with an entire Arcade mode thrown in for good measure. This is essentially an opportunity to replay certain levels and gather a massive score through actual skill. Look at it as a similar addition to the game as the Batman: Arkham Challenge Maps. Batman’s key focus is on his amazing hand-to-hand combat abilities (and gameplay system), and in Max Payne it’s all about vigour behind the trigger (and an equal system), so Arcade is a celebration of that. I found the length of the Arcade mode at odds with its purpose though, as even Max’s inner-monologue moments from those levels, and most cut-scenes also make it in, but ultimately they don’t detract from making a mark on the Global Leaderboards.

There’s also multiplayer, which we’ve already talked about. Rockstar is making a big-deal out of the Max Payne 3 multiplayer and they seem to think they’re onto something special with it. Unfortunately at the time of writing this review I’d had little multiplayer opportunity, but also having experienced much of what’s on offer in that space in preview sessions, all of which I’m happy to report is refreshing and fun, there’s no denying it’s another feather in the game’s cap. Whether or not the unique gameplay modes will resonate with players will remain to be seen, but we’ll definitely be looking at exploring the Max Payne 3 multiplayer in more detail down the track.

Which brings us full-circle. Most readers just want to know if a product is first worth their time, and then second their money. Without question Max Payne 3 is worth your money. The Arcade mode and multiplayer alone add enough to the single-player campaign to keep you coming back for more, but for me the selling point of the game came in its presentation. 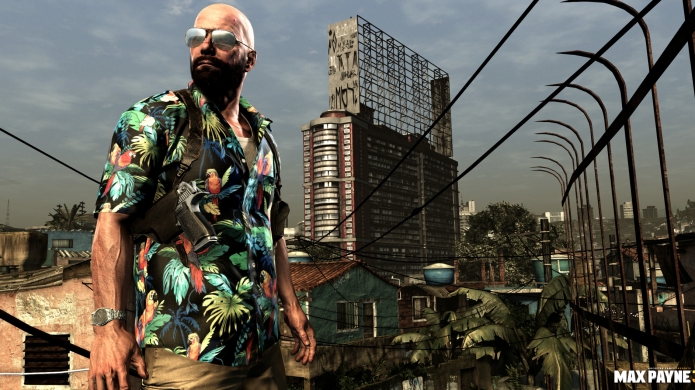 Max’s soundtrack, the game’s audio and voice-acting -- all absolutely top-notch. It’s also one of the best-looking games Rockstar has ever produced and the narrative at hand, that is the story with which Rockstar has planted their own stamp on the IP, is among the best in the business. It’s not just an adult’s game because of the high levels of violence (and believe me, the levels here are high), it’s that Max Payne 3 is a mature game. The themes are mature, the way in which they’re handled is mature, and I wouldn’t second-guess myself for a minute recommending Max as the sort of game to be put forward for the whole “games as art” discussion.

Max has definitely grown up, and while he’s at the mercy of a new handler, I’m confident his future -- though always bleak for him -- is a bright one indeed.
Latest Comments
Link