There's still an unfortunate stigma that comes with games that utilise licenses, especially comic book licenses. And while this has changed a bit over the past decade or so, it's still a difficult concern to shake. Which is why I went into Marvel's Guardians of the Galaxy less optimistic than I would have liked, but certainly left with a lot more faith in the direction of these ventures (and adventures) moving forward.

And here's a snippet from our review, which explains why:

All of the above, which only plays out as long as you allow it, stands as a testament to the care and reverence taken with this outing as more than just a seeming cash-in on Marvel’s current world domination. The game itself transcends the films and the comics without ever forgetting they came first. This fits snuggly as part of the slowly-growing list of comic book videogame adaptations that get the respective license right, and in this instance where, when judged against Square Enix’s other team-based Marvel venture, Marvel’s Avengers, it really shouldn’t be as good as it is. Scratch that. As incredible as it is.

This is the real deal, gang, and as far as team-based action-RPGs go, Marvel's Guardians of the Galaxy is right up there with the best of them.

Perhaps the licensed soundtrack in the upcoming Marvel's Guardians of the Galaxy are all uncompressed WAV files. Either way the installation requirements on PC for the Square Enix and Eidos Montreal single-player adventure clock in at a hefty 150GB. As for the other hardware bits, it's all fairly modest.


That said, Marvel's Guardians of the Galaxy will definitely be a looker. As per the PC Tech Trailer below it's set to feature real-time ray-tracing and NVIDIA DLSS support. Meaning you'll need a NVIDIA GeForce RTX PC to get it looking as good as this.

The old-school mix-tape vibe is alive and well in the upcoming Marvel’s Guardians of the Galaxy from Eidos-Montréal, which will feature a soundtrack populated by the likes of Mötley Crüe, Bonnie Tyler, Billy Idol, Pat Benetar, Def Leppard, and BLONDIE. The almost complete track-list has been revealed, and it's definitely That's So '80s.

Case in point, it features both Bobby McFerrin's 'Don't Worry Be Happy' and New Kids on the Block's 'Hangin' Tough'. You can almost smell the hair-spray and feel the sweet touch of a new pair of parachute pants.

Here's the track-list which you can also stream a Spotify playlist.

Blondie - Call Me
Blue Oyster Cult - Don't Fear The Reaper
Bobby McFerrin - Don't Worry Be Happy
Hot Chocolate - Every 1's A Winner
Wang Chung - Everybody Have Fun Tonight
Tears For Fears - Everybody Wants To Rule The World
EUROPE - The Final Countdown
New Kids on the Block - Hangin' Tough
Pat Benatar - Hit Me With Your Best Shot
Bonnie Tyler - Holding Out for a Hero
KISS - I Love It Loud
Flock of Seagulls - I Ran
Culture Club - I'll Tumble 4 Ya
Mötley Crüe - Kickstart My Heart
Simple Minds - Love Song
Rick Astley - Never Gonna Give You Up
Frankie Goes To Hollywood - Relax
Def Leppard - Rock Rock Till You Drop
Rainbow - Since You Been Gone
A-ha - Take On Me
Soft Cell - Tainted Love
Loverboy - Turn Me Loose
Autograph - Turn Up the Radio
Wham! - Wake Me Up Before You Go-Go
Scandal featuring Patty Smyth - The Warrior
Starship - We Built This City
Twisted Sister - We're Not Gonna Take It
Billy Idol - White Wedding


In addition to the above Marvel’s Guardians of the Galaxy will also feature music from the fictional '80s Star-Lord Band which you can see the vintage VHS animated music video for the track 'Zero to Hero' below.

Early on in a new cinematic-focused look at Marvel’s Guardians of the Galaxy from Square Enix and Eidos-Montréal, we learn that there's going to be over six hours of detailed real-time animated and interactive story stuff in the game. And yeah, that was going to be the headline here -- "Guardians of the Galaxy Has Over 6 Hours of Cinematics". And then Lady Hellbender steps into frame and all I can think about is just how much she looks like Kassandra from Assassin's Creed Odyssey.

Albeit dipped in blue and with a scar on the left side of her face. To the point where the differences make Lady Hellbringer look like Kassandra fan-art if she were depicted as some sort of Ancient Greek Queen of the Underworld. 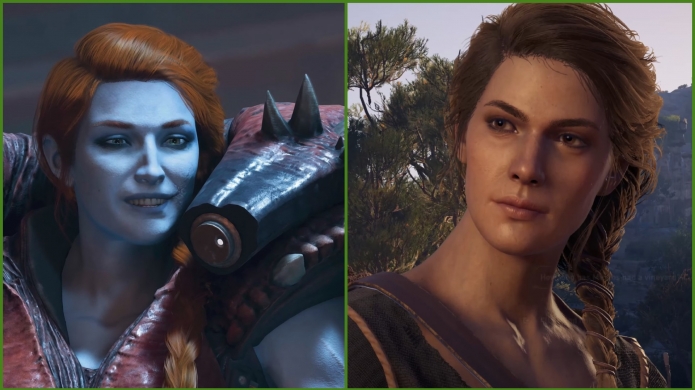 Of course if you haven't played Assassin's Creed Odyssey, the best-est of all the Creeds, then this clip will simply be a breakdown of the upcoming Marvel game's cinematic ambition.

And you'd be able to pay attention to what's being said without seeing Kassandra. Marvel’s Guardians of the Odyssey is out October 26 for PS5, PS4, Xbox Series X|S, Xbox One, and PC.
Tuesday, 15 June 2021
Marvel’s Guardians of the Galaxy - Square Enix Gets Another Marvel Go-Around with Eidos-Montréal
Post by Steve Farrelly @ 01:20pm 15/06/21 | 0 Comments

In case you missed it, Square Enix and Eidos-Montréal revealed the next superhero joint under the SE banner, with Marvel's Guardians of the Galaxy, a single-player action-RPG set within its own videogame universe. That is, not at all officially tied to the MCU or the comics.

And in light of this, and with some earlier access to information about the game, we've put together a bit of a developer deep-dive on what you can expect in this 80s-inspired galactic romp.

And on that note what we’ve got here is a fundamental difference -- across setup, approach and overall presentation. Even though this is another high-profile action-RPG with a look that is similar to the MCU but different (see: Triple-A cinematic), Guardians is not an online co-op affair. Or a game experience born from the style of looting and shooting found in Bungie’s Destiny, or Blizzard’s Diablo series. It’s also not a live-service game, or a drop-in and drop-out co-op narrative jam -- it is single-player only. And yet it’s still a game with action-RPG mechanics, albeit one filtered through the galaxy-hopping mixtape fun of Marvel’s Guardians. You are, in effect, Star-Lord.

And we should press play on the Walkman there, because what we’ve seen so far in Guardians -- at its most basic core -- is a game that celebrates the humour and overall tone of the IP. This is off-the-wall heroing, with ragtag Kirby-inspired characters and galactic bads and spaces that really don’t have a ceiling on how whacky or insane they can, and should, be. But this also creates a worry point for the game. As in, how far did the studio go to deliberately get off the chain, versus pulling back on it for a more tangible, relatable experience? And if it was the latter, was this Marvel mandated, or Eidos-Montréal just not realising the full potential of a game and setting like this?

Click here for our Marvel's Guardains of the Galaxy deep-dive.