You can hear the fanboys rejoicing all the way from Asgard for the release of yet another MVC title. It’s been a long time coming; nigh on 10-years to be exact, and with titles like SSFIV reigning the market, some might be wondering whether it’s worth forking out top dollar for yet another Capcom beat-em-up.

While not offering gameplay or even online-play to the depths of SSFIV, there’re plenty of obscenely outrageous Hyper Combos, new-ish fighting mechanics, luscious visuals and a smaller, but much more refined character list to play with here. This is a much more rounded game then its predecessors and offers itself as a better gateway beat-em-up for beginners (more on this a little later), whilst still giving veteran fighters a little something to play with and explore, as well. 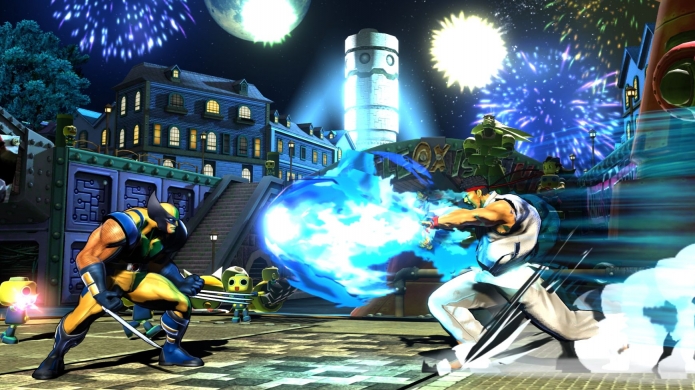 The hulkiest difference in Fate of Two Worlds is the simplified attack button selection. Similar to Tatsunoko Vs. Capcom before it, we are stripped down to the basics here. It’s Light, Medium, and Heavy partnered by a cross character, generic Launch button executing a move to get your opponent right up there. While you may scoff at the seemingly basic set-up, really, it just allows you to focus on more in-depth mechanics and a great combo system encompassing some awesome air juggling. It’s always a wonderful feeling to pump out a beefy combo just to tag in another character and repeat the process leaving your opponent limped in the corner like some unwanted, crusty old Archie comic - all before your opponent has an opportunity to even hit the ground. Your tag-in buttons are now default mapped to the bumper buttons, providing quick and easy access to tag assisted specials and swapping in and out in the heat of battle; whether in the air or on the ground.

Combat in MVC3 remains true to its original arcade roots and as such never gets as in-depth as other hardcore fighters, but it also manages to never feel too light on substance. Which in this humble reviewer’s opinion is a great line to traverse. For the beginners there is a great “simple” controller mode that turns all moves into a one-button push. That is, one each for specials, super moves, and for attacks. This is a great entry-level style for button mashers as it gives them a chance to jump in and learn a little about gameplay without the need to remember countless quarter circle, towards combinations.

Capcom recreated a new visual style with SSFIV, and they’ve taken that style, tweaked it, and shifted it into the comic-book realm with finesse. Visually, I’m still in awe at Capcom’s ability to seamlessly blend comi- book style illustrations with cel-shaded graphics. The dark, black shadowing present in comic-book illustrations are translated perfectly to the screen. The cut-scenes alone are gold, even going so far as to include comic book motion blur. Comic lettering pops up on screen all the time proclaiming your air combo, or successful advancing guard technique.

The backgrounds are equally stunning, albeit light on variation, and include a selection of locations from beloved Capcom and Marvel locations; all recreated in the glorious third-dimension. Ghouls ‘n Ghosts and Asgard being some of my personal faves. 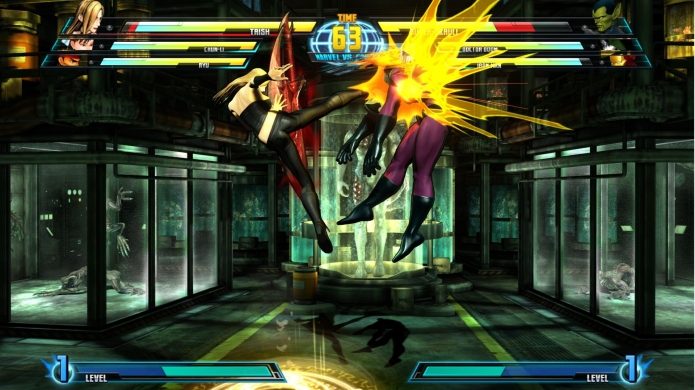 You should all know what to expect from the audio department with a Capcom fighter by now. I’m positive everyone has at least wandered past an arcade machine with a previous iteration of MVC or even a Street Fighter game. The music is upbeat, tedious and boppy. However, there is much more variation in MVC3; levels recreating audio from beloved games to match the background design are stand outs. The rest is your typical mix of nu-metal, Backstreet Boy-esque crap, and J-pop. Lots of J-Pop. The thing is though, it works. It matches MVC3’s fast-paced over-the-top style of action arcade play. Everything is huge: the special moves, the supers, the backgrounds, and the music ensures this attitude is carried through in every element.

Your choice of characters, as previously mentioned, has been dropped from MVC2’s huge roster of 56 characters down to a (still ginourmous) selection of 36. Ameratsu and Tron provide for some interesting battles, while some of the key power trios of past titles are still evident. There’re plenty of comparable adversaries that can hold their own. Some with the strangest moves can be the most rewarding when you really master their technique, as they tend throw your opponent off-guard, purely because they can be hard to judge.

The balance of characters in this game really feels better than other fighters around. I generally turn to my mainstay characters such as Akuma or Ken. Not for lack of knowledge or Noobness as I’m sure you’re thinking. Those characters are just comfortable; I know them like the back of my own hand. Playing MVC3 on the other hand, I felt myself venturing out, almost never choosing to play with the Wolverine’s or Ryu’s of this game.

Also, capturing a character’s true essence due to their fighting style and special moves has been mastered by Capcom this time ‘round. The characters all ooze their own personality; in their presentation, voice acting, and fighting styles. Deadpool prances around like the cocky dick he is, imitating other characters and generally being a fool. Haggard, on the other hand, is basically Zangief’s prodigy on speed and lugs around using his brute strength at short-range. Arthur is awesome, running his short legs quickly yet barely moving as he strides along the screen. 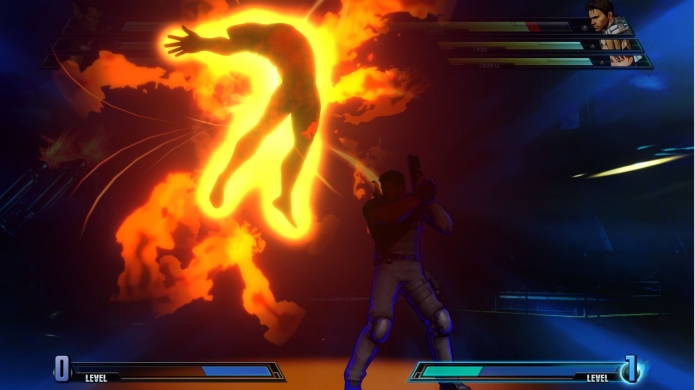 Your selection of game modes is pretty standard for a fighter these days: the staple Arcade mode, Versus and Training. There’s also a Mission mode, which, unlike the title, suggests is just a set of challenges involving doing a specific move or combo against a static character. Whilst it’s great to learn combos and familiarise yourself with characters quickly, it would’ve been nice to see some character-specific missions and storylines, similar to Blazblue.

Online play is pretty barebones, which is a shame as this is where fighters get most of their re-playability. Ranked matches and Player matches are available of which I constantly had trouble joining the ranked matches. Player matches would load almost every time, Lobby mode on the other hand I had no trouble connecting to. Providing you a sort of tournament mode in groups of up to eight-players, this should be the be all, end all, mode but the shittiest thing is there is no option of watching other players battles while you wait. You have to sit in a lobby watching their license cards dance about on screen with their character’s energy bars dropping. Sorry but that’s just shit, what were Capcom thinking? Jump-in gameplay options are available for that true arcade frustration feel, but can be switched off if you wish.

All the above aside, I can still hear the moan of the non beat-em up types now: “Really? Another button-mashing venture with a quarter circle thrown in here or there.” Are there still those out there who can’t appreciate the depth that fighting games, like most other game genres for that matter, can offer the adventurous and diligent player who looks beyond a genre’s seemingly basic facade? If so, Marvel Vs Capcom 3 offers so much more than its awesome graphics, you have to put your woes aside and give it a look in. It’s much more than it may seem.

This is a great fighter. It has all the right elements, but is lacking in just that little bit of depth and a deeper online play selection - it will be great for those who like, or are intrigued by fighters but may have been a little too afraid to jump in. If you love your fighting games though, this is still a must-have. Even if you’re simply a Marvel fan.
Latest Comments
Link