Context here is as flimsy a pretext as a single, unfamiliar Family Guy in-joke – it makes no sense, no one really cares and it’s as quickly forgotten as it was heard. Rabbids are in the Mushroom Kingdom. Quick, Mario, do… something. While you’re at it, here’s a team featuring a few unfamiliar characters but because this is unfamiliar territory for your namesake, they might as well represent blank slates through which you can grow both an understanding of this tactical adventure, and learn to tacticalise yourself. Yeah, I made that last word up, but hey, it might as well be a metaphor for this whole game and review.

The above should not be read as contempt for the game by any measure, it’s just that plot kind of doesn’t matter here. The real hero of Mario + Rabbids: Kingdom Battle is its tactical combat, and the challenge layered throughout. This might be a bright and bubbly Nintendo exclusive, but it’s an intense and often harsh experience. It makes fun of you before each battle with an offer to play that confrontation in an Easy Mode, because it knows it’s about to kick your ass. And while the XCOM comparisons are welcome, the tactical layering within Mario + Rabbids is tenfold to that series, which is saying quite a lot. There’s also the game’s pacing, which is near-perfect in this writer’s opinion. It’s lengthy, but the game does a fantastic job of easing you into this and the learning curve isn’t ever too full-on, without ever compromising the aforementioned challenge aspect of the game. 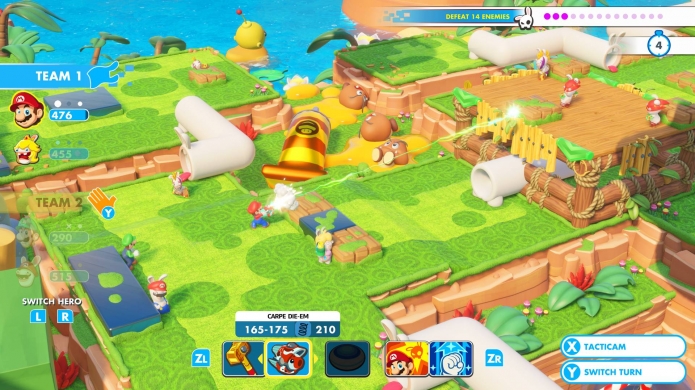 Ever so gracefully you push your way through utterly gorgeous corners of the Mushroom Kingdom, with Princess Peach’s castle represented as the game’s main hub. Here you can utilise the Battle HQ to upgrade your characters through a relatively lite-on set of skill trees that help with Movement, Attack, Technique and the appropriately named “Other”. I say “lite-on” because on the surface your choices are fairly straightforward. Characters earn Orbs which are essentially the points you use to purchase new skills and abilities. Some can have multiple tiers within them, making them stronger the more you invest. It’s an easily-digestible character progression system, but hidden bonus with this seemingly simple system is that with each investment, the game’s tactics in battle become more and more complex, based on how you choose to utilise and layer them.

There’s also a great variety of enemy types throughout the game, and the further in you get, the more mixed with them your encounters become. In my first five or so hours with it, I struggled because I was largely ignoring playing with different weapons (found throughout the game by completing puzzles, and then purchasing from the Battle HQ), and investing in abilities. Once I did though, and realised how best to pick team members, the game thoroughly opened up, while still forcing me to continually go back and invest in my characters and weapons. It’s also another reason to explore the game-world, which at first glance might just seem like one big, gorgeous set-piece with no real room for hidden paths or areas, but this is a Mario game, and Ubisoft has channeled the titular hero’s back catalogue of work and applied it here with aplomb.

Most of the game’s puzzles centre around timed coin collection, block shifting and hitting the right switches here and there. They might sound simple, but the further into the game you get, the more complicated and challenging they become. It’s all part of the earlier-mentioned pacing. And the way in which each “World” eventually intertwines and connects, despite you feeling like they’re ‘worlds’ apart is a thing of beauty. Ubisoft’s Mushroom Kingdom design might actually be the best we’ve ever seen, and running on their Snowdrop game-engine -- the same tech running The Division, it’s absolutely gorgeous.

Bosses are also a very key focus in the game, and they’re both revelatory in the modern gaming landscape (in an ironic kind of way), and hilarious. The irony is because bosses aren’t entirely in vogue these days, but further to this is that the bosses in Mario + Rabbids: Kingdom Battle follow an old-school design philosophy that sees them usually go through three different phases before they’re toppled. But without that being the norm in contemporary gaming, it’s sort of a breath of fresh air. You know, “what’s old is new again”, type of thing. The hilarity side of them is strictly that the Rabbids component of the game has simply allowed Ubisoft to poke as much fun at Nintendo’s beloved characters as they please, and it’s hard to look past Rabbid Kong as far as their best enemy Rabbid creation goes. I desperately want a plush toy of him. 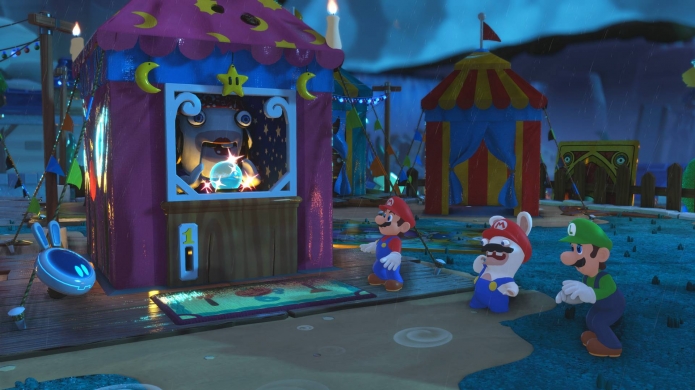 The game also doesn’t shy from length. There’s hours upon hours of gameplay here. The campaign alone is stupidly long, but adding to that there are challenges you can partake in, in previously beaten battle areas. These usually have very specific rules, and the game grades your performance, which should keep perfectionist players coming back over and over again. Moreover, these also reward you with coins and orbs, which means there’s an early grinding option if you want to level your characters up early. Coins also reset in each area after you’ve left them, so if you wanted to, you could just just farm coins area-to-area to be able to buy all of the goodies. Thankfully it’s not so easy,though, because weapons need to be found or earned through gameplay, so there’s a decent balance between the two. But that you have the option to build up your coin war chest, at the very least, is a welcome one indeed.

Add in co-operative play (separate from the main campaign), and Mario + Rabbids: Kingdom Battle is the complete package. It also features full Amiibo support and will have new content added down the track to keep players coming back over and over again. And so here we are, full circle where, after all of that my only gripe is that the game could have done with a world-map (there’s kind of a ‘map’ to help you track your battles and how you went in them, but it looks more like a McDonald’s kids place-mat and isn’t at all helpful). Otherwise this is near-perfect gaming experience. Wonderfully paced, beautifully presented, hilariously nostalgic and reverent, portable, ever-challenging and charming to a fault. If The Legend of Zelda: Breath of the Wild wasn’t enough to push your switch to Nintendo Switch, Mario + Rabbids: Kingdom Battle definitely should force your wallet. Gaming like this is as rare as hens Rabbid teeth.