I really gave big kudos to EA last year. What with releasing three brand-new IPs and a year earlier launching the innovative Skate. It almost seemed like an entirely new company with a deft focus on original, hardcore gaming as opposed to their update-a-year license cash-cows.

But business is business, and EA are among kings when it comes to milking what they can, and so we're yet again faced with another Lord of the Rings license: Lord of the Rings Conquest from the recently let-go Pandemic Studios. 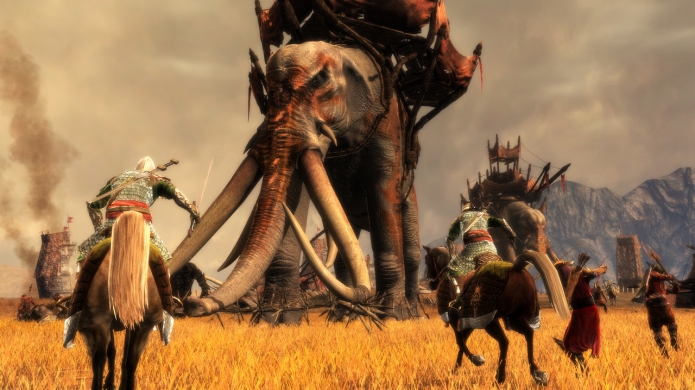 My tone probably already sounds disappointed, and I'm right to be so. EA have been milking this thing all over the Xbox Live Marketplace, and for a very small amount of time (calculable only on a quantum level), I thought we might have been in for a bit of a license turn-around (after all, not every LotR game has been crap, right?). But alas, my fleeting moment of hope was just a desire to finally have the sort of game the Tolkein legacy deserves (I've only just recently come off watching these again for the first time in ages, upscaled thanks to my PS3 – they look great), and while I really don't want to rag on Pandemic, especially after they were so recently shown the EA exit, but Lord of the Rings Conquest is an utter pile of rubbish.

From the moment the super-compressed New Line logo animates onto screen you just know there's something not right here. Without mincing words, Conquest is essentially Dynasty Warriors set in the LotR universe with epic battles from the films utilised as the many ‘levels' you need to beat in order to progress.

At the beginning of each level you choose a class, whether it's a warrior, mage, scout or archer; you're forged the same task throughout, which essentially require you to button-mash your way through Sauron's hordes of orcs and the like, holding this position or beating these generals until the battlefield captain tells you you've done a smashing job.

Once you beat the game's "War of the King" mode, you then unlock "Rise of Sauron", which means the touted "good or evil" element isn't even readily available to you. Why this was locked into a completionist element is beyond me, there must be countless LotR fans who want nothing more than to see the world of men as bodies at their feet.

As you would expect, the game progresses through levels based off moments in the movie. So initially you're fighting at Helm's Keep, but eventually you head into the mouth of the Black Gate of Mordor and so on. The locations, for the most part do their job as their respective movie backdrop, but there's not a lot of detail invested in them, and when you're looking at small elements such as a really nice looking creek or running water effect only to have your character not able to interact with it at all (in that you walk over it as you would a dry piece of ground, with no affect). A game like this doesn't necessarily need the level of polish I'd demand, but this is a respected license and universe, what's presented here really is subpar.

Enemy types range from Grunts who are easily despatched, to the more resilient Officers, Captains and eventually Giants. There are also Hero units and Machines of War. It's all in keeping with a common game theme, but you're ultimately just mashing your way through the game, and those who learn to utilise their attacks beyond just hitting the controller face as much as possibke are going to quickly learn there's very little depth here.

There's a multiplayer player component that is likely to be more popular than the single-player, but like the single-player, it lacks in a sense of depth or discovery – it's more an arcade add-on than anything else, with up to 16 people able to slog it out. There's also a local and online co-op if you and your friends don't have any better games to play – but really, I could think of better uses of my time.

It's likely a lot of the game's shortcomings aren't necessarily Pandemic's fault, either. Licenses like this tend to carry a fairly strict deadline, but just once it would be great to see a license of this magnitude treated with the respect it (and we) deserve.

Visually you're looking at a pretty bad game that has low-poly character models with very little detail in them, and an animation tree that makes marionette puppets in the hands of children look like Pixar-quality movement. It feels clunky linking together combos and looks equally worse. Moreover, watching your enemies just kind of potter about as they take their sweet time to make their way to you doesn't make it seem like the realm of men are going to have too hard a time of it. It's all just incredibly ill-balanced, poorly constructed and looks as bad as it plays.

Fans of the Lord of the Rings might grab this, but then it might piss them off, too (like it did me). If you're a fan of Dynasty Warriors and Lord of the Rings, then you might actually get something out of this – otherwise, it really is best left at the bottom of the lake in the hands of Smeagol who can waste his life away in a cover stroking the box saying "my precious" (sorry, couldn't resist).