Is LEGO City Undercover probably aimed at younger players? Of course. Does that preclude adults from gaining enjoyment from it? Of course not! It is a much needed change of pace after the oppressive violence of Tomb Raider and BioShock Infinite. It is, almost literally, a playbox open world, comprised of the very blocks that most of us manipulated, chewed and stood on painfully in our early years.

Embracing the aesthetic of Grand Theft Auto, if not quite its breadth, LEGO City Undercover marks the first time that the franchise has gone solo, relying on its own inventiveness. When you think about how LEGO games are structured, it runs the very real risk of falling flat. Up until now, each borrowed IP has lent itself to special suit powers and character-driven moves that feel intuitive due to broad understanding of the nuances of Batman, Harry Potter, Frodo, Indiana Jones et al. Here, it’s just LEGO’s new hero, Chase McCain, a shiny-toothed undercover cop with an arrest warrant for Rex Fury, the game’s oft-referenced but seldom seen villain. 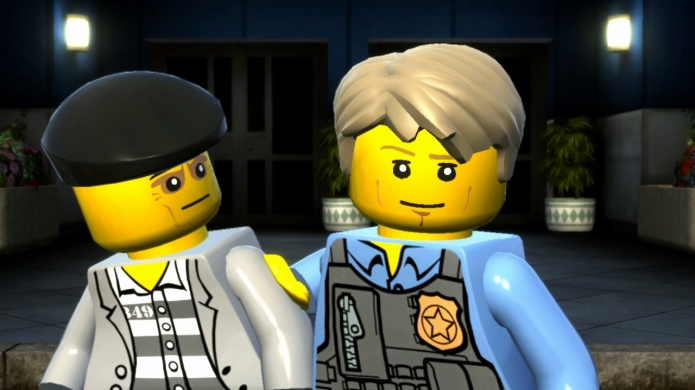 Nothing is particularly difficult in LEGO City. Combat is laughably simple, allowing you to dispose of large groups with ease. Driving badly has no consequences and is actually encouraged by ever present (and respawning) LEGO studs, as well as the fact that bashing down parts of the city yields build blocks, the game’s secondary currency. Every mission is fun yet full of hand holding, all level runs made blatantly clear and wrapped up in explanatory phone calls via the Wii U GamePad. Even with this simplistic approach, there’s an underlying sense of fun and dry wit that shines through. This is a simpler LEGO game than we’ve played in the past, but the experience is spread out across a broader space, encouraging relaxed play rather than focused, busy puzzle solving.

There is still a LOT to collect. The city is large and holds all manner of secret areas that require specific skills to access. As always, that elusive percentage completion statistic hangs over you at every opportunity. While the game is ostensibly about the open city experience, interactions with LEGO citizens are limited. They conveniently slip beneath your vehicle and don’t show too much intelligence beyond their purpose to populate the play space. There’s no Radiant AI or Euphoria physics here. Yet every now and then you’ll catch a charming sight, like someone riding a segway in the park. LEGO City is a whimsical place, a childish facsimile of a city in motion, populated by animated toys with no purpose other than to be seen.

Missions take a couple of different guises. Some use open city areas, getting you to climb buildings, slide down tightropes and reach specific trigger spots to then use the GamePad in some way – holding it up to the screen and zooming in to listen to conversations or taking photos for evidence. Others load a separate level, which play much more like the usual Traveller’s Tales offerings. It’s worth noting that this game is made by an offshoot, TT Fusion, and this becomes evident in the less complex interactions in levels and general lack of complicated build puzzles. Not that this is a bad thing – we’ve already had more than enough of that across multiple LEGO games anyway. Instead, each level maintains design around a particular skill. Later levels eventually make broader use of your learnt skills and offer some more involved key-turning. 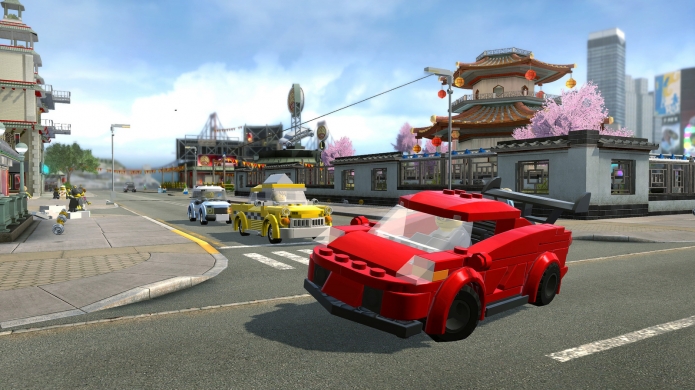 The main issues are the game’s incredibly long load times and frame-rate dips. Just loading the game up each time requires two separate loads of a minute each – one to reach the menu and another to load the open world. Similarly, every time you enter buildings or missions you’re faced with 70-second buffers each side. Whilst driving, particularly if you’re being destructive or if the mission throws chasing police at you, the frame-rate can become noticeably affected, which is disappointing given that there’s not too much in the way of high-res visuals going on.

Rather than swap characters to gain different skills, Chase can change disguises in an instant. This is handled via a disguise menu that pop up when you hold X, or you can simply cycle through them with the shoulder buttons. The fireman disguise is the only one that can bash boulders and handle dynamite (to destroy metal LEGO objects), while the thief costume allows you to break into doors, crack safes and operate a paint gun to change the colours of objects. Chase’s cop disguises give him access to a grapple gun, which opens up rooftop exploration. He’s also pretty spry on his feet, able to interact with any blue objects in the world, jumping up walls Mario style and being flung across building tops by large launch pads. There are plenty more disguises to discover and these affect how deeply you interact with levels and the city. As you explore the world, locked skill circles taunt you, becoming available only once you have played through story missions that open them up. LEGO City Undercover is a big game. Playing for fifteen hours will only net you about a 10% completion rate, with only half of the disguises unlocked. Its sedate pace belies its depth.

GamePad integration is fantastic and makes me think it would be quite difficult to port this game to the other consoles. It’s used primarily as a real time map, allowing you to tap locations to add waypoints or check at a glance which route to take. Super builds – blank platforms that require block currency to unlock special structures such as vehicle call points or stunt ramps – show up on the screen, as do disguise booths, which give you the option to customise how Chase looks for each disguise. 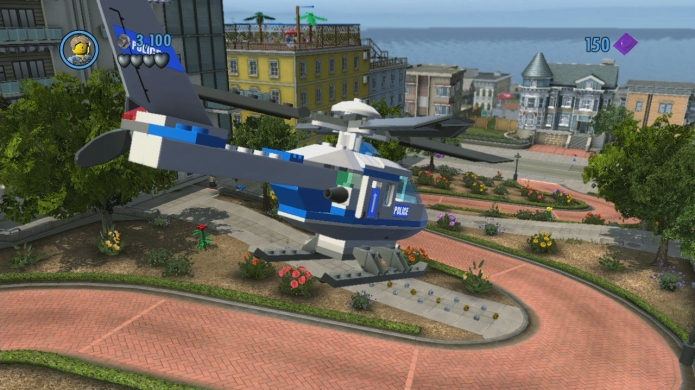 The GamePad is also the portal through which other characters call you up, their little avatars appearing on the small screen and their voices coming through the speakers. It’s a simple but cool addition and the interplay between the GamePad and television is enjoyable. Elsewhere, you can use the pad by holding it up to the screen and scanning the city whenever Chase is investigating someone. This might mean you have to scan different groups of people until you find the correct incriminating conversation or reach a vantage point in order to take pictures of a nefarious deal going down. Seeing the city in action on the small screen makes us wish for off-TV play but unfortunately it’s not an option. You can also just bring the GamePad up at any time and search the world for hidden super blocks (which yield thousands of build blocks in one hit) and tag them. They then appear with a nav circle in the full-screen world. Lastly, after completing a specific mission in which the camera is used, you can use the GamePad at any point to take a photo and share it with your Wii U friends and the Miiverse. All up, LEGO City Undercover is a bit of a flagship title of how to use the GamePad without showing off or shoving features in just for the sake of it.

Its humour may be slightly weak and unlocks spread far and wide, but LEGO City Undercover is a thoroughly enjoyable and refreshingly innocent open-world game. It contains more than enough hooks to keep you engaged and has the right level of silliness to gloss over the realisation that its open world is really just a massive mission hub. If you enjoy the LEGO games but don’t own a Wii U, it’s probably not quite worth rushing downtown to grab one. However, it is the best third party game so far on the system.
Latest Comments
Link