Left 4 Dead was a successful first person shooter from Valve Software. The second instalment in the series follows in the same vein, but for those who haven't been introduced to it yet, a brief synopsis: Essentially you're fighting your way through a late-stage Zombie movie: 99% of Earth's population has been turned into ravenous blood-thirsty zombies (the "infected") only satiated by feasting on the blood of those who have yet to succumb. You and your "friends" (they're easily identifiable because they're the ones whose eyes don't glow in the dark and they're not running straight at you with blood leaking round their mouths) who are survivors of the infection just want to get the hell out of this mess, mostly because being chased by hordes of zombies who want to eat your brains every time you sneeze or otherwise make a loud noise gets to be a real drag.

You have your pick of weapons and ammo that are lying around in the world; happily the zombies aren't smart enough to use them and you're in America, so there's plenty of guns lying around. Anything else you can scavenge from the environment to keep you healthy is fair game too.

If the game started and ended with mindless infected zombies running at you, you'd be forgiven for wondering how this simple mechanic would be worth your hard-earned, but there's a bit more to it than that. As well as the brain-dead zombies that constantly run at you flailing limbs (their strength is in their number and in getting close to you without you seeing them first), there are special infected who have mutated to have specific skills and smarts and whose goal is to bring you down, or at least mess with you long enough to help the other infected do the same to the other survivors.

The other large part of the game: it's designed to be played with other humans. There's a single player mode in which you run around with three other survivors that are controlled by AI, but you'll have to trust me when I say that they don't react to your screaming and begging for help like a real person does. They're good fun as far as they go, but you're going to want real honest-to-god humans in control of the other survivors if you're going to make it through the campaigns in the harder difficulty levels. There's a campaign mode that lets up to four players take on the horde (essentially co-op), and there's a versus mode where four survivors try to get through a level while four human-controlled special infected roam about, and then the roles swap. Teams are ranked based on how far they get (and how many get there).

So what's new in Left 4 Dead 2? To my eyes, most things. The core mechanic and ideas remain unchanged from the first game, but Valve has taken what was successful in the first game and improved on it for the second. It's not the perfect game now, but they've clearly thought seriously about the feedback from Left for Dead, and done a decent job of addressing some of it. They've also thrown in a lot of new stuff besides.

Characters
First up, the characters. The survivors are largely unchanged apart from their appearance. There are four new characters, but the way they play and interact together is unchanged, save for a seemingly much larger repertoire of one-liners that are delivered through the campaigns. The real stars are the special infected, and there are three new types that rear their ugly heads (hopefully only long enough to have a round planted between their eyes).

The Charger: Similar in strategic effect to the hunter, the charger's skill is to utter a loud battle cry and charge straight ahead. If his charge coincides with a survivor, they are picked up and carried along for the ride, until the charger comes to a stop (using the survivor as an airbag). The charger proceeds to use his one muscular arm to repeatedly smash the survivor into the ground until one of two things happens: a) The other survivors kill the charger, or b) The survivor's head falls off. Care must be taken when using the charge: if you miss grabbing one of the survivors and end up at the end of your run without one to soften the stop at the end, you're very vulnerable until your head clears.

The Spitter: The spitter is a fairly weak infected that's very vulnerable (similar to the boomer), but has one of the best attacks in the game, one that will frustrate many survivors that know to get their backs to the wall and cluster together when the common infected horde swarms at them. The spitter's skill is to lob a ball of goo a considerable distance. In itself pretty disgusting, but when you take into account the fact that the goo is noxious acid, and also that it splashes on impact and sits on the ground continually eating away at human flesh, you've got a number 1 anti-camping weapon. The spitter is responsible for making many things more difficult for the survivors, but I'll get into that later.

The Jockey: The jockey's skill is to latch onto a survivors head, from where he can "ride" them in whichever direction he chooses. A survivor with a jockey controlling them can be made to walk into danger, can be ridden far away from their team-mates and disabled. There's something insanely fun about using the jockey in versus mode and getting a really good ride while the survivor under you shouts at his team-mates to free them. Not so much fun to be ridden, of course. Keep a weather eye out for these guys, they look a bit like Smeagol from LotR, only they think 'my precious' is inside your skull.

The other special infected have the same skillsets as before, with some very subtle changes when they're played in versus mode that'll take a little bit of adjustment if you're pro. The hunter especially springs (see what I did there?) to mind. 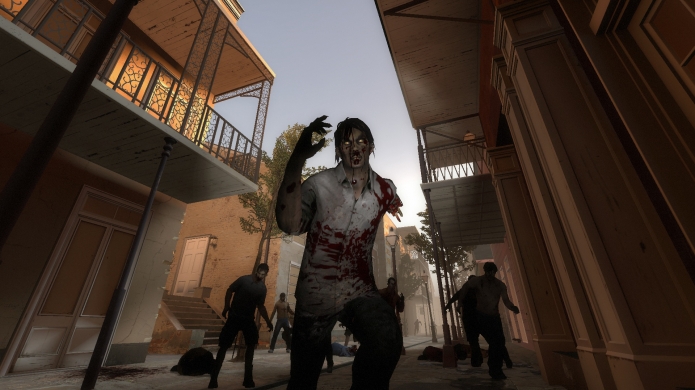 Inventory
There's a new class of weapon, the "melee" weapon. These basically steal your pistol slot (you can't use your pistol any more while you carry them), and allow you to deal high damage to those zombies that are right next to you. There's a couple of comedy options like the frying pan, and the electric guitar, but functionally they all seem to be the same. The other choices for the pistol slot are dual wield pistol, or single magnum pistol. The magnum pistol is one shot common infected kill.

The other weapons have been upgraded a bit; there's now pump-action, automatic, and combat varieties of shotgun. There's two new types of automatic rifle to go along with the M-16, and a new variety of sniper rifle that's extremely powerful and has thirty shots in the clip. A new silenced sub-machine gun also makes a debut.

There's a grenade launcher now, and it packs a punch, but make sure you've got "friends" ready to protect you all the time or a rockin' melee weapon. It's a one-shot and then reload affair, and nothing causes brown trousers like the rest of a zombie pack kicking in the door while you fumble to pop another round in the chamber.

The inventory slot usually taken by the medkit has been upgraded too. It's now more multipurpose, and the survivors can choose whether to carry a medkit, defibrillator, or ammunition upgrade. The defib kit allows for a one-use revival of a survivor back from the dead. The ammunition upgrade allows the survivor to deploy extra types of ammo that can be picked up by the four survivors, giving them incendiary or explosive ammunition. Just the thing to deploy when you can hear a tank smashing his way towards you.

While on the topic of enormous zombies with overwhelming power and speed, the last item is likely to be handy for just that situation: the adrenalin shot. It gives you a boost of speed and a little bit of health enabling you to outrun even the most stubborn of tanks. Just watch out for the cars... 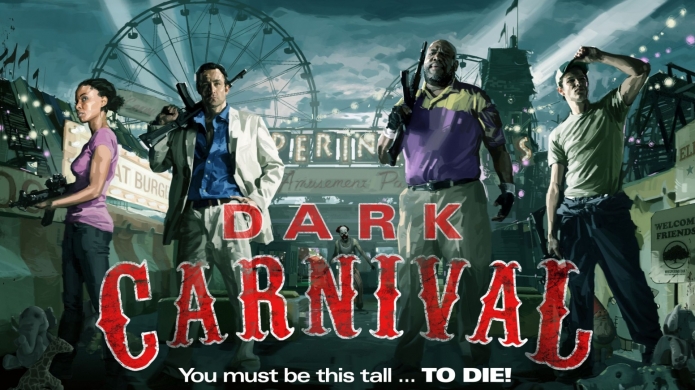 Environment
The overall look and feel of L4D2 has had an overhaul that will make it hard to go back to the first game. The levels feel much more open and more detailed than before, which helps to promote the feeling of desolation. There are numerous cosmetic changes, and there's no great need to list them all, but things like environmental effects, Uncommon infected (clowns at the carnival, swamp-zombies in the swamps) really help to set the scene. The level design seems to have focused on really keeping the levels within the campaign themes, and allowing for plenty of size to explore for items. Even the environmental music that starts up for horde rushes has been themed.

The version of Left 4 Dead 2 that is made available to Aussies is different to that sold almost everywhere else in the world.

The original version of L4D2 was Refused Classification in Australia, and Valve Software had to edit the game to make it suitable for an MA15+ release.

Gamers should be aware of the differences before buying the game – the easiest way to see them is to watch this quick video we prepared which clearly shows the differences.

Hopefully Australia's classification ratings will be reviewed soon and we'll get an R18+ rating - keep watch on EFA's campaign site for the latest."
The pace of the levels seems a little faster now, thanks in part to the spitter (can't stay in a single camping spot forever), and also thanks to changes in the crescendos and finales that keep the player moving instead of being able to wait them out so that the stream of zombies diminishes. The focus is on progress and movement instead of being able to hang around and camp indefinitely.

Achievements
The old Left 4 Dead Achievements haven't been migrated into L4D2, which I feel is a bit sad, but perhaps it's for the best. There's a new set of achievements relating to the new special infected, and the new inventory items.

Multiplayer
Campaign and Versus modes are still here, alongside Survival mode that was added as DLC some time after Left 4 Dead came out. There are two new modes, Realism and Scavenger. Realism is basically a hardened version of Campaign mode, all the useful little HUD tips are gone (you can't see where your friends are when they go behind walls or wander off from you), and the zombies are much more resistive to body hits (you really want to be going for the head). Scavenger is a 4v4 multiplayer mode where the Survivors have the goal of collecting fuel canisters and the infected are there to do what the infected do best.

Left 4 Dead 2 promotes team play. You rely on your team-mates. If you're looking for a strictly single-player game, this might not be for you. If you hated the first one, it probably isn't for you. If you've never played Left 4 Dead, play the demo and see what you think. Personally I find it a very enjoyable experience both initially in single-player, and long-term in the various multiplayer modes. Left 4 Dead 2 invigorates the brand, and I definitely recommend it to L4D fans and new players alike.