When approaching a new game, especially if the release is completely indie (in the sense that it’s self financed and published), one can’t help going into the experience expecting something fresh, entertaining and possibly even somewhat innovative. Lofty goals to be sure, and with such high expectations the end result will always be disappointing, even more so than if the game came from one of the larger publishing houses in the guise of the latest SMS of Shooty or Medallion of Being Nice.

Krater, from independent Swedish developer Fatshark, looks more than promising on paper and even more so from a quick glance at screenshots or videos. It’s a vivid post-apocalyptic action-RPG that blends bright colourful locations, rendered using cutting-edge Directx 11 special effects, with the character-based combat and dungeon crawling action that’s been made all the more popular recently with the release of the long in gestation Diablo 3 and the upcoming Torchlight 2. But Krater doesn’t exactly fall into the standard action-RPG mold, as it also brings with it the interesting approach of throwing RTS elements and squad dynamics into the mix, in a similar fashion to the gameplay seen in the excellent Dawn of War II series. It even features a large open-world where players can explore new locations using a world-map (reminiscent of the ones seen in 90s Japanese RPGs), without restricting players to a linear path of progression. 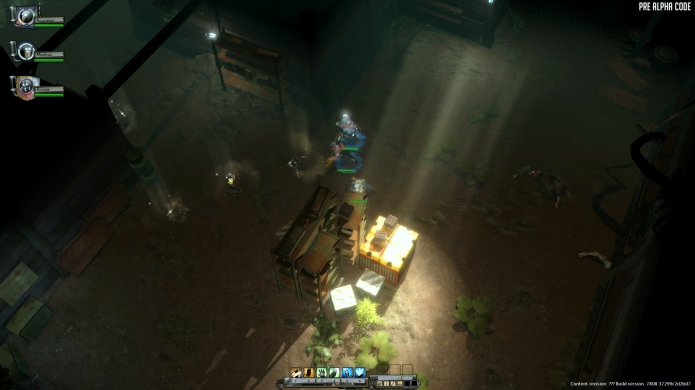 It’s a shame then that Krater is fundamentally flawed from a design perspective, and worst of all thanks to a laundry list of bugs and glitches, feels more like a beta release than the final product. The question of where exactly the problem lies with Krater is a difficult one, but can be found when you try and distill exactly what it is that makes an action-RPG -- a genre that thrives on repetition -- keep players coming back for more and more. An acceptable answer to that would be the character progression aspect, where leveling up, and customisation helps instill a personal sense of investment and reward into the game. Your character in an action-RPG is a direct reflection of your investment and the more you play the more impressive your digital avatar becomes - a simple setup, and unfortunately one that Krater foregoes completely.

In Krater, you control a squad of three characters from a pool of recruits that rank (ie level) up to a certain cap, who you can then customise with upgrades and new weaponry. The problem, however, is that at regular intervals you need to exchange your squad for a new set of heroes to match the increasing difficulty as well as expand beyond the rank limits of the early, weaker recruits. That may not read like a bad thing, and if executed well it possibly wouldn’t be bad, but in Krater it means that each new squad member will need to be ranked up through grinding easier dungeons/maps to bring them in line with where you were up to. They will also have the exact same moves at their disposal as your previous medic, bruiser, or “gun guy”, with a slight variation on their name, making the whole process feel more than a little artificial. This means that there is no attachment to the characters you control and alternatively very little investment in the story being presented. 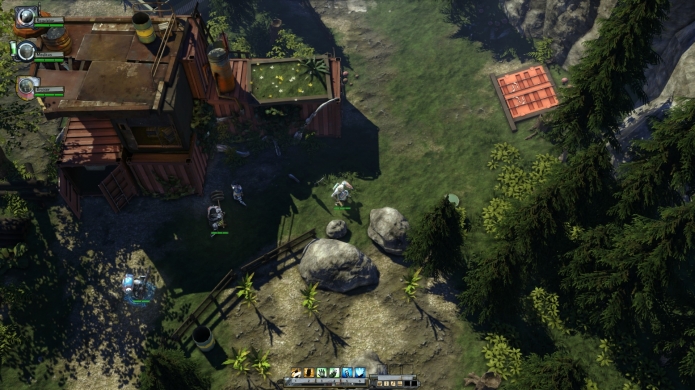 If the gameplay itself were solid, robust, and strategic like the one seen in Dawn of War II then this design choice could be overlooked or even make sense in the grand scheme of things. Unfortunately the gameplay is riddled with weird and detrimental quirks, like your ranged characters standing right next to your melee characters (making them easy fodder for foes) with no way to change their formation, maps that get confusing when you change the rotation of your viewpoint, clicking on obvious targets not registering as you hit the wrong pixel - all wrapped up in a difficulty curve that forces grinding the same boring maps over and over.

This is a shame because Krater features a great visual style and setting, plenty of content for such a budget-conscious price-point, and even a sometimes-exceptional soundtrack that conjures up feelings of Blade Runner meets Mass Effect. Perhaps a lot of the issues with the game could be fixed with patches and expansions, like the planned co-op implementation that is coming, as the core foundation and concept is still enticing. But in its current state Krater is a disappointment, and due to its indie pedigree, even more so than the latest Terrorists are Bad Guys, So Let’s Shoot Them 7: Modern Edition.