For many PS3 owners, Killzone 2 is the game they've all been waiting for. It represents a few things at this point in the system's life: Strength, commitment, longevity and exclusivity, to name but a few important factors and in the wake of so many killer apps landing on the Xbox 360, both exclusively or replete with exclusive content options, Killzone 2 comes at a very integral point in the PS3's life.

For anyone wondering how this fares to the belittled and criticised first Killzone, there really is no comparison - Killzone 2 is more than its own game with the only real point in common being the genre and its narrative.

With this in mind I'm going to ignore the first game barring story reference as it would be unfair to compare the two. Killzone 2 is such a leap over its predecessor any such association would be seen as sheer semantics in light of Guerilla's achievements here.

None of the above is to say Killzone doesn't suffer in any capacity, because there is a manifest of issues I have with the game, not the least of which will see me being lynched by the Sony/PS3 mafia for pointing out, but I want it known from the outset I think this is an excellent game. It's absolutely one of the most impressive looking current-gen titles, and has a plethora of great combat ideas thrown into a solid mix of tried and tested gameplay formulas. It just isn't all it could be, perhaps for lack of a focus on consistency. But let's start at the beginning. 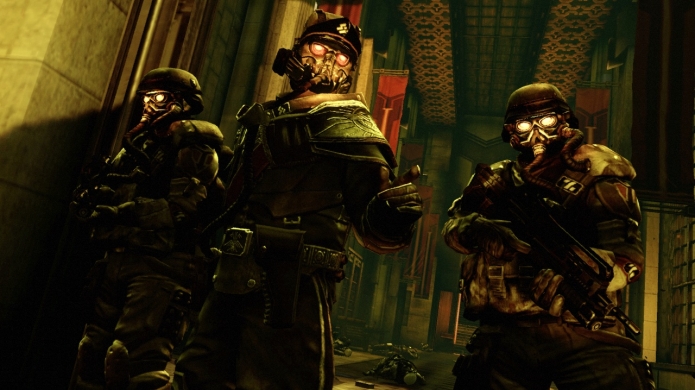 Killzone 2 picks up the series' story in the wake of events that unfolded for the first game and the excellent PSP outing, Killzone: Liberation. Taking the fight to the home of the Helghast, the planet Helghan, the ISA (Interplanetary Strategic Alliance) aim to overthrow the fascist Helghan dictator, Emperor Scolar Visari, and put an end to the juggernaut that is the Helghast war machine.

Ultimately the plot here is not a convoluted one. Many parallels are drawn upon from popular-culture and historic events (the Helghast are essentially space-age Nazis) and coalesced into a neat little package. You don't need to know the ins and outs of the politics of the ISA or Helghast in order to want to press on, nor is it important you play either Killzone or Killzone: Liberation. There's a plot here, to be sure, so story junkies can definitely delve into the backstory if Killzone 2's presentation and set up float your boat enough, but it isn't essential.

You play the game as Sergeant "Sev" Sevchenko, a fully realised, voiced character (often rare in the FPS field). The entire game is presented from behind his eyes and you're pulled in and out of controlled cut-scenes and real-time gameplay with seamless transition.

Along for the ride are various other ISA soldiers, and for the most part you're usually playing most of the corridor sections with an AI partner in tow. These guys more than hold their own, and if downed can be easily revived by you. They'll shout at the enemy, swear, give instructions and offer a fairly standardised military/combat experience to you, keeping things familiar, but far from fresh.

In keeping with some of the Halo love (or at least the 'Popular Things In The FPS Field These Days' handbook love), Sev can jump in the driver's seat of a host of different vehicles, from sturdy, powerful tanks to gigantic mech suits. Controlling these actually proved reasonably fun, and there's never really any reason to complain about the formula being broken into segments where you're all-powerful.

In fact, with all of the above mentioned, you may have already painted a pretty good picture of what to expect. And Guerrilla make no apologies for crafting a gaming experience not too different from other action/war shooters out there. Instead what they offer is their own spin on the genre which is a polished and stunningly presented submission thanks largely to the fictional otherworldly setting of Helghan (and its disastrous weather and atmosphere) and the many years the game has spent in development.

I honestly can't stress enough how amazing this game looks. From the cinematic cut-scenes aboard the ISA station (and your subsequent launch from), nestled high above the alien Helghan ground surrounded by hazy sky and thick clouds, to the gritty urban decay of the city streets, military installations and beyond, Killzone constantly (and refreshingly) surprises in the visual department. It's among the prettiest games on the system proving yet again its powerhouse worth, and easily a benchmark for current-gen titles.

As far as gameplay is concerned, there's much borrowed (and likely homaged) here, as I mentioned earlier.

Halo and Gears of War-style 30-second encounters keep you on your toes throughout various checkpoints and bottlenecks, and for the most part enemy AI is reasonably dynamic with restarts constantly resulting in different approaches both from the enemy encountering you and your subsequent need to shift your strategy. I wouldn't say we're talking Halo series levels of enemy smarts here, but few games have reached that benchmark yet, and it remains the strongest feather in Bungie's cap in this reviewer's opinion.

So here's the part where I read from that manifest of problems, and while most of what I've offered thus far is fairly glowing, Killzone 2 does massively fall down in a number of different areas.

To begin with, controls just don't cut it. Because the game uses a cover system it feels too convoluted, especially for those of us who prefer to have precision aim, cover and the like applied with toggle and given the frenetic nature of gameplay having the toggle off (so a single push puts you in cover, and another to get out) makes things feel awkward, slow and clunky. Precision aim just feels slightly off as well. I've played more than a hundred hours of both the last Call of Duty games and they nail elements like this in the control department, and it feels far more responsive than Killzone 2. I think the ideas behind the system were good; it's just been poorly executed.

Your teammate AI I mentioned earlier is another missed opportunity. You can revive your downed ally, but if you're killed it's game over. No chance for being revived by your mate, which seems utterly ill-balanced (especially because the game's checkpoints are unforgiving, adding to the frustration). Moreover, while friendly AI is pretty good in that they do help clear an area, not having the option to issue even simple commands leaves their existence by your side as nothing more than aesthetic at best. You're going to face some serious bottlenecks here, and there's nothing worse than your buddy taking on the bad-guys in the worst possible way (and often they jump right in front of your line of site).

Level design, while aesthetically pleasing, also feels a little awkward. There are impediments in way of weighted debris (in that they sport real-world physics) that can mildly trip you up, while the preciously placed cover points do offer you some refuge from fire, they can also make it difficult and frustrating for you when attempting to flee a thrown grenade (an option to throw back ala Call of Duty would have been nice). The game's corridor areas also just feel too small, especially as a key thing here is character design is just slightly over-the-top giving a sense of 'bigger' to you, your enemies and your mates.

And what PS3 offering would be complete without some stupid use of the SIXAXIS controller? Unfortunately Killzone 2 has incorporated it with interactive elements such as turning valves and the like. Moments like this pull you right out of the game through tedium and annoyance. It doesn't feel natural to perform the motions of turning a valve with the controller, and it really is unwarranted. During load segments you can tilt the controller to view trick-of-the-eye 3D-esque artwork, which is kind of cool, and really the only time the motion functionality of the SIXAXIS should have ever been used.

As far as multiplayer is concerned, there seems to be a massive focus on building this as something of a Halo/CoD beater. Yours truly was also invited – for the purpose of this review – to match it up with the multiplayer team from Guerrilla and other games journos. The whole affair was slightly different and daunting at first, but there's a real emphasis on working as a team and understanding the strong and weak points of whatever map it is you're playing on.

Your teams will take on five different game-modes all within the same map. These modes change on-the-fly making it interesting while equally giving you some serious life out of the current map.

You have all the options of shifting things up such as randomising teams each time a new game is started, or joining a squad of up to four members (you can have eight squads per game). Clearly this is aimed at community clan building and all the bells and whistles that come with such a concept are included. There's also an XP meter that fills after each round not at all dissimilar to that of Call of Duty.

Beyond the 32-player online mode and all its juicy parts, there's an offline mode as well where you can hone your skills on the various maps on offer with bots. It's not nearly as fun as playing with humans, but it's likely multiplayer Killzone 2 is going to become a very skill-based affair, so to keep things on an even keel, the option to sharpen said skills without being owned all the time is a welcome one.

To be honest, while it was fun and enjoyable (and I really appreciated the goal of multiplayer), it's the sort of mp you're going to need to invest a lot of time in to get the most out of. It didn't have the sort of appeal as a game like Call of Duty does for me, but that's just a personal thing – controls are the same as single-player, and in keeping with my thoughts on those, it just took a while to get into this, as opposed to the ease at which I nestled into CoD. But I'll keep at it, because even playing a hosted game out of Europe saw the entire session running incredibly smooth.

Killzone 2 is going to sate PS3 owners, regardless. But it's not a massive leap forward in gameplay or advancing the FPS genre. It does, however, stand as a stunning testament to the raw power of the PS3 and will offer anyone looking for some exclusive Sony love hours and hours of enjoyment. Unfortunately for me, the lack of comfort in the control department and realisation of elements such as full usage of your AI teammates, et al left me wanting more from the game beyond its incredible gloss.

There's a stellar action game here, and it'll keep you on your toes for awhile, I'd just like to see more done with franchise in the future.