Thanks to the smart phone the spy game has changed, and breaking into heavily guarded villas just isn’t the fun and varied activity that it used to be. It wasn’t too long ago that if you wanted to pick open a lock or bypass a security door you’d have to either use a fancy lock picking kit or steal a keycard with right level of security access - and one that was probably colour coded too. To figure out where security bad guys were loitering as you crept around corners, you’d either have to be fed that information from an off-site contact looking at a satellite image via an earpiece or by a friend with telescopic lens overlooking the villa – sometimes both, just to be safe. Nowadays the smart phone caters for all of these situations and more. Well, that is of course, according to the new Bond outing, 007 Blood Stone.

In Blood Stone, the smart phone James Bond (played by a digitised Daniel Craig) carries around seems to be like the spy gadget equivalent of the Swiss Army Knife, albeit without the cool transformation from nail clippers to screwdriver. Instead this all purpose device acts as the be-all of spy gadgets, one that can bypass security doors, hack into mainframes, provide a real-time view of enemy movement through walls, as well as being able to distinguish between a normal print-out of facts and figures to one that contains hidden evidence relating to the current objective. Oh, and it can also make phone calls if the situation calls for it. Sorry about that, it seems that the 007 license to kill extends to executing bad puns.

Ahem, so it’s actually been a few years now since the last Bond cinematic outing, and thanks in part to the bankruptcy of MGM studios the franchise, as a film series, has been put on temporary hold. So to add even more pressure to a high profile release, Blood Stone also has the burden of continuing the new cinematic Bond style, one that in addition to the tuxedos and martini sipping isn’t afraid to get a little dirty when required. Sure it may only be a videogame, one of those pastimes strictly for the kids out there, but the fact is that for the Daniel Craig era of James Bond, both Activision and developer Bizarre Creations clearly set out to give an overall feeling that the sequence of modern Bond adventures could very well be seen as: Casino Royale, Quantum of Solace, and Blood Stone.

From a presentation perspective the game feels in step with the recent films, offering up a very cinematic story spanning numerous locations and settings, fast cars, and even faster women. Gameplay takes place in the third-person and much like any number of recent third-person shooters Blood Stone opts for cover-based gameplay that lends itself to small and large scale shootouts in addition to some very basic stealth manoeuvring and takedowns. And it all works; the controls are responsive and the snap lock-on to enemies, when aiming from cover, keeps the action moving fast and fluid. Interspersed between the fire fights you’ll find some very light spy work, where Bond’s aforementioned smart phone basically solves the international mystery all by itself between games of Angry Birds and sexting M (played by a digitised Judi Dench). In addition to the running and gunning, Agent 007 also likes to take part in the timeless cinematic staple that is, the car chase.

Developer Bizarre Creations made a name for itself with the Microsoft exclusive Project Gotham series of racing games, so the inclusion of car chases in Blood Stone should be more than an afterthought and really should be an integral part of the game. Unfortunately, although competent, the car chase sequences require no real skill apart from the ability to steer left and right to watch and then dodge countless scripted explosions, car crashes and other obstacles as they animate at regular intervals. It’s purely visceral, which as a consequence has no real lasting value in the gameplay department. And although the third-person actioning fares a lot better with the introduction of various weaponry and a variety of melee attacks available for Bond to punch, choke, and clothesline his way forward, the problem with relenting momentum makes the gameplay itself take a back seat to the cinematic spectacle of following Bond around the world - uncovering a conspiracy involving numerous players, villains and bio-weapons.

Along the way Bond meets up with the pre-requisite Bond Girl (played by a digitised Joss Stone), whom much like the female co-stars in the recent films is somehow entangled in the international mystery, and not too bad on the eyes either – for a computer-generated character, that is. For an action heavy game, surprisingly there are plenty of set pieces and fights, strictly left to cinematic sequences, in addition to the dialogue heavy exposition sequences. But perhaps even more surprising is the fact that Bond doesn’t really bed any women in this outing, which is strange, when you consider that videogame body counts are ridiculously high compared to films. And the fact that Bond seems to always find time, between firing his pistol, to err, fire his pistol. 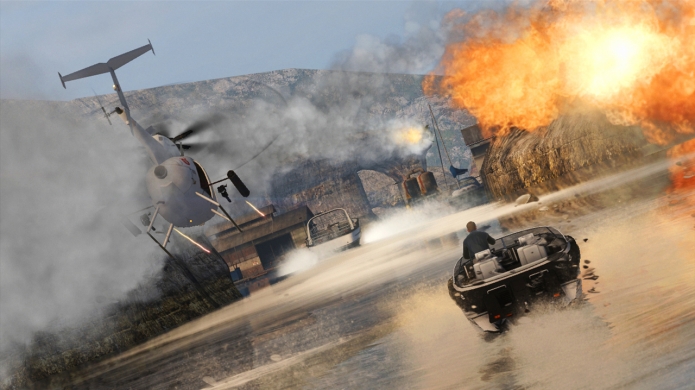 For a heavily cinematic game, the campaign doesn’t outstay its welcome (translation – it’s quite short) and although it’s not quite as engrossing or well written as the recent Bond films, it does serve as an adequate stop-gap for fans waiting on the next film. The game engine does a pretty good job of mimicking the live-action look and feel of Casino Royale and Quantum of Solace thanks to some great environment detail and post-processing effects like film grain and motion blur, which help cover up the relatively shallow gameplay on offer. Blood Stone is not a disaster or even a bad game, it’s actually quite polished, and the transition to a cover-based third-person perspective feels like a step in the right direction for the franchise. Unfortunately the levels themselves are all pretty standard ‘going from Point A to B’ affairs with regular intervals of crouching behind crates to either shoot the bad guys or sneak up on them to watch one of the many animated melee takedown sequences.

And once you play through the campaign there is very little here to bring you back. Without any real variety in the mission objectives, the higher difficulty levels serve no real purpose nor provide any real cognitive challenge, like a certain golden eye did. Oh, and the industry demanded multiplayer mode is here and an afterthought at best, and as expected a virtual ghost-town merely a few weeks after release. So without anyone actually playing the game on-line, there’s no real point delving into the details. With that in mind, the relatively short campaign on offer does little to make Blood Stone an essential purchase. But as an extension of the Daniel Craig Bond-era, this is definitely worth a look for 007 fans - just don’t expect a royale treatment.