It feels like not so long ago that I was ripping the long-awaited Duke Nukem Forever a new one: a game that suffered under the burden of longwinded expectations. While I Am Alive slots neatly into a similar long-gestation category, the lack of pedigree for the new IP and absence of excitable media meant that expectations erred more on the side of ‘meh’ than ‘woo’.

Things kick off in the fictional US town of Haventon, as players jump into the boots of a man who has returned to the city to find his wife and daughter. The catch is that this is a post-apocalyptic world thanks to the “Event” that has wiped out most of the world’s population and left the ground covered in a poisonous cloud of ash and, well, death.

During the pursuit of your family, you’ll come across a few friendly faces but, for the most part, this is a hostile world. And this is where things get interesting. Combat is handled differently than your average post-apocalyptic game. There are rare moments when you can avoid a fight but, a lot of the time, you’ll have to use a bit of real-time strategy to best your foes. 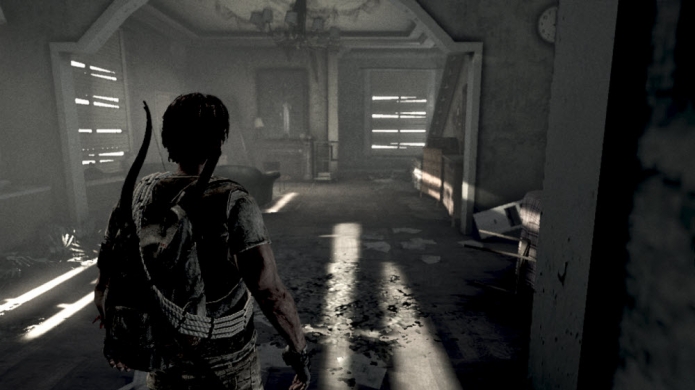 Even from early on, they tend to hang around in angry groups, with the trick being that you spend most of the game with only a single shot—or even an empty pistol—as your primary weapon. Armed goons are best dispatched first, but machete-wielding enemies can be intimidated into submission with your pistol: even if it’s empty. While hand-to-hand combat is as easy as getting up close and mashing a button, things get trickier when the groups are larger and less intimidated by a guy with a gun that may be empty. Then you have to take into account that some enemies will call your bluff and run you down. Whatever you’re doing in these often tense situations, it’s best to work fast.

Aside from the combat, the other main unique feature of I Am Alive is the stamina system. Running, sprinting, climbing and spending time in the poisonous ground-level dust all eat up precious stamina. Use it all, and you’ll have a few moments of button mashing to make that final part of a climb, or you can use precious items found in the world to score back some of the meter. If it is used up, though, it’ll actually reduce your overall stamina capacity—which can also be regenerated through discovered items—and it adds a nice motivator to performing otherwise menial tasks such as climbing or moving around in the dusty world; especially considering the semi-dynamic musical cues that get louder as your stamina gets lower.

You won’t get to see much of the world thanks to a permanent dust cloud that’s sometimes ominous and other times clearly used to reduce the draw distance. In fact, there are a whole lot of graphical, animation and sound oddities that regularly tarnish immersion and reek of a game that has missed out on a crucial layer of polish just to get it out the door.

Furthermore, I Am Alive seems to be confused at times as to how much exploration it wants you to do. If you were to main quest the game, you could knock it over in a few hours. If, however, you want to explore the world, there’s at least a good half-dozen hours to be found in this arcade title. But exploration is regularly not rewarded, while the bulk of the small side quests can be found not too far off the beaten path. There’s also a harder mode called Survival that removes checkpoint retries—a controversial choice that is sometimes frustrating and sometimes forces you to weigh up your combat tactics—and limits the number of resources you’ll find in the world.

It’s bizarre that these side quests play second fiddle to the somewhat cliché main quest, as they add a whole new level of decision making to the game. You can take on a pair of cannibals who have imprisoned their next meal, but you might take damage in the fight and, even if you win, you’ll have to use a precious bullet to shoot the lock to free their prisoners. Later on, you may be lured into the poisonous dust to save a lady in distress, who’s actually tempting you into an ambush; albeit against her will. Do you use a bullet to break her handcuffs, leave her to her fate as payback for her forced betrayal or ignore her entirely as she cries out for help as you walk on by?

It’s these types of decisions that made I Am Alive a compelling experience from start to finish, despite control fails, some shoddy platforming sections and occasional pathfinding woes. When I Am Alive broke immersion with any number of the aforementioned flaws, which it did far too regularly, it was easy to chastise it. But when it was taking risks and throwing me into tense situations or decision moments, I couldn’t drag myself away. The somewhat ambiguous ending leaves it open for a sequel, and I hope Ubisoft Shanghai is given the opportunity to push their formula further, albeit with a whole lot more spit and polish.
Latest Comments
Link