Based on its title, Hyrule Warriors: Age of Calamity sounds more like a follow-up to the Dynasty Warriors meets Zelda jam that was Hyrule Warriors than anything to do with BOTW. If you move your poster-gazing eyes down from the title a tad, or simply watch any of the trailers released so far, then you’d know Age of Calamity is set in the same Zeldo-verse as BOTW, with a prequel storyline tied to that all-timer. 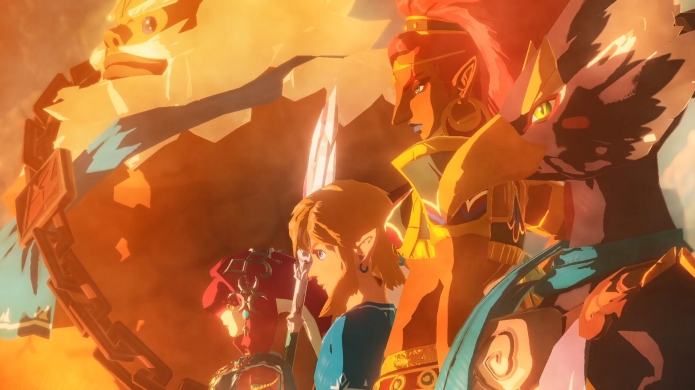 So then, is Age of Calamity game enough to fill the Gerudo Valley-sized gap in our collective souls? Can it quench the unquenchable heart that lies still, awaiting the return of Link in Breath of the Wild 2? Yes. Yes it can.

It's been about three-and-a-half years since Breath of the Wild released, easily one of the greatest The Legend of Zelda games of all time.


Let's set the scene, Hyrule Warriors: Age of Calamity (which should never be confused with Hyrule Warriors: Definitive Edition) is set 100 years before the events of The Legend of Zelda: Breath of the Wild. Spoiler Alert for BOTW, you hear about how some real shit went down 100 years ago, going from ruins and relics to a first-hand retelling of an epic conflict in a vibrant and bustling Hyrule.

Let’s set a little more scene, on the personal tip. I’ve never liked the Dynasty Warriors series or really paid much attention to the gazillion or so Warriors games Koei Tecmo has released. Hyrule Warriors meant that I finally gave it a good go a couple of years ago -- the allure of Zelda is like that. Ultimately, blending Zelda with that Warriors ‘tonnes of characters on screen’ action was a case of if I didn’t like it with my boy in green, then I’d never like it. 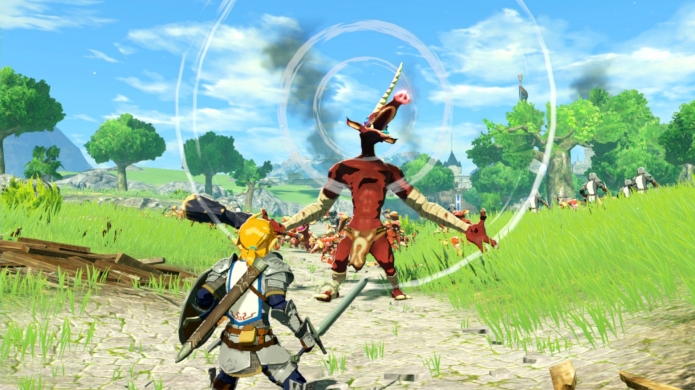 Plus, it’s Zelda. How could my ol’ pal Zeldo fail me, I said. Long story short it was fine but I just could not get into it. Smash cut to 2020 and even after that first BOTW-inspired trailer, I wasn’t looking forward to Age of Calamity. It looked cool, but like George Walker ‘Texas Ranger’ Bush said, “Fool me once, shame on me… (pause)... fool me twice… (even longer pause)… you can’t fool, and fooled, me again”.

And so like a former President, I left my home (office) and moved on with my life (into the kitchen for a snack). Anyway, if you’re reading this far you know I caved and decided to live a little more like Jack Burton and said, “Another Zeldo Warriors? Ahhh, what the hell”.

Smash cut again, this time to this very paragraph. With Age of Calamity it’s a style of game that has finally connected with me. Often mindless arcade-action laced with engaging cutscenes, story, and a real sense of urgency. Like a puzzle made up of puzzle pieces, it all fits together so well. So then, why this time and not last time? Well, let's begin our journey into BOTW past by talking about game mechanics that borrow a little from BOTW future. 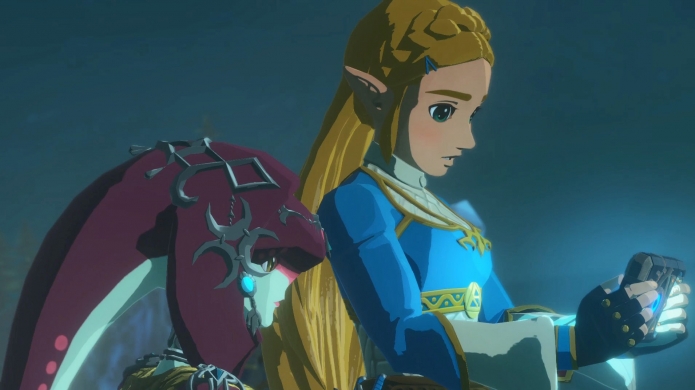 In that Warriors-style, throughout your journey you unlock new characters in Age of Calamity. Most of which actually add some variety to how you take on hordes of enemies. It's not quite Monster Hunter levels of variation, more so a visual spectacle in line with the hero you're playing, but there are significant enough ‘Area of Effect’ damage changes. Switching from Link to Zelda feels completely different as a result, even though they’re similar.

With Age of Calamity it’s a style of game that has finally connected with me. Often mindless arcade-action laced with engaging cutscenes, story, and a real sense of urgency.


What ties the general combat together is the simplicity of the combo system, light and heavy attacks following a similar pattern of X and Y Button presses with variations to achieve different combos. And you can also unlock additional combos which further expand the button mashing fun-time-combo-extravaganza in Age of Calamity.

Where it comes alive, as per the art direction and setting, is with that BOTW connection. Every character has access to the Sheikah Slate abilities you unlock in Breath of the Wild so you can switch things up using Bomb, Stasis, Magnesis, and Cryonis. And just like in BOTW each ability has a cooldown until you can use it again. 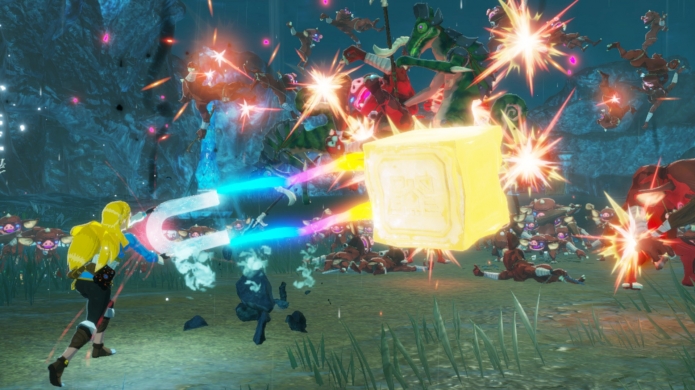 Right off the bat this adds depth, using Magnesis on enemies wielding metallic weapons lets you create a whirlwind of weapons to cut through and decimate hordes. As Link that is, other heroes have variations-on-a-theme where they might absorb the weapons instead and then fling them back at the enemies. Like the evil dude from The Mask.

There are even metal boxes laying around for you to use at your disposal, familiar stuff for BOTW vets done on a faster and more grandiose scale. Additionally, larger enemies have super obvious tells for when they’re about to commence a special attack - and if you’re quick enough spotting the rune above their head, you can use your rune ability to counter. Fans of Streeties even get some love with a ‘SUPER’ bar building up during combat for that screen-filling devastating area damage.

Perhaps why this works where the original Hyrule Warriors didn’t is that it turns Breath of the Wild into an arcade-action game with a cinematic story to back it all up. Age of Calamity, as described above, piggy backs on the greatness of BOTW’s mechanics in every possible way, and that's a good thing. 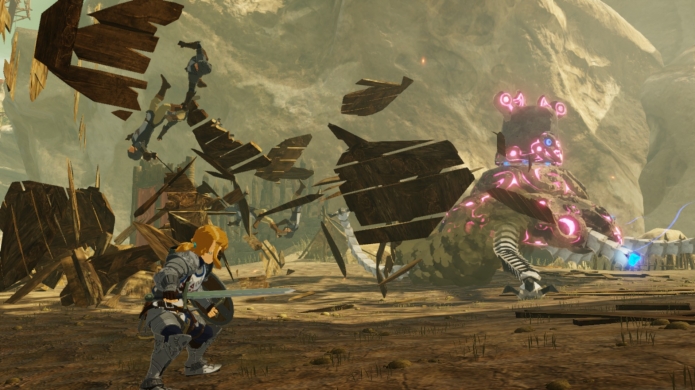 The main-line-quest structure is mostly linear but there are a lot of side quests to collect materials and level-up your heroes by earring that level-up juice we call XP. The side quest variation is a little lacking, but makes up for it with some quests locked to specific heroes. Which is great because on numerous occasions I’ve found myself having no interest in playing with a specific hero - but after trying them out on a side quest, well, I ended up using them quite a bit from then on.

Perhaps why this works where the original Hyrule Warriors didn’t is that it turns Breath of the Wild into an arcade-action game with a cinematic story to back it all up.


There’s also a little meta-game based on delivering items, which thankfully are handled within the UI. The downside though is that it gives the map a classic Assassin’s Creed feel - icons everywhere. Items are then used as a currency for additional character combos, hearts, an extra SUPER bar. You even get an item radar so you know exactly which level has that Hinox Toenail you’ve been searching for. This is the game-iest part of Age of Calamity, and when you throw in the missions and story elements on top of that there’s a lot of game here. The larger missions are usually the epic story missions, and those are particularly well done with cutscenes and superb voice acting to back up all the action. 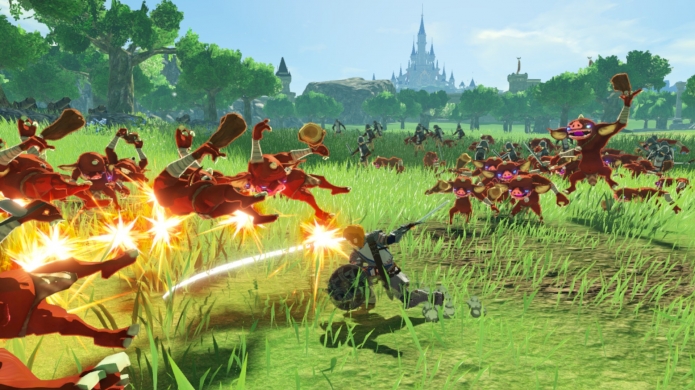 Playing on normal does feel a tad on the easy side but there’s a nice flow to the combat -- to the point where I was fine without the challenge. Hyrule Warriors: Age of Calamity can be quite cathartic simply rolling through hordes of enemies, and with mission times varying from a few minutes to around about 30 or so for the story stuff they can also be replayed for more of a challenge later.

And so we get to the look. With Hyrule Warriors: Definitive Edition I just couldn’t get over the art style and world because it was released right after Breath of the Wild’s debut. Sure, it was a port of a Wii U game, but artistically and technically it felt like a few steps back. Even though, at a glance, it looks like Age of Calamity simply lifts all the assets from Breath of the Wild, that’s still one of those sigh of relief moments. It all looks wonderful, with missions building on the locations found in Breath of the Wild. Literally, because being set 100 years in the past means there are now buildings.

That recognition does wonders and with three-years passed in our own timeline there’s even the beginnings of some nostalgia and excitement visiting different well-known Hyrule locations in Age of Calamity. But, with so many characters on screen - as is the Warriors Way - how does it, you know, perform? Usually, I spend most of my Switch-time playing handheld, but as the times have changed, the portable-hybrid bad boy hasn’t really left its dock - which is where most of my playtime has been spent here. 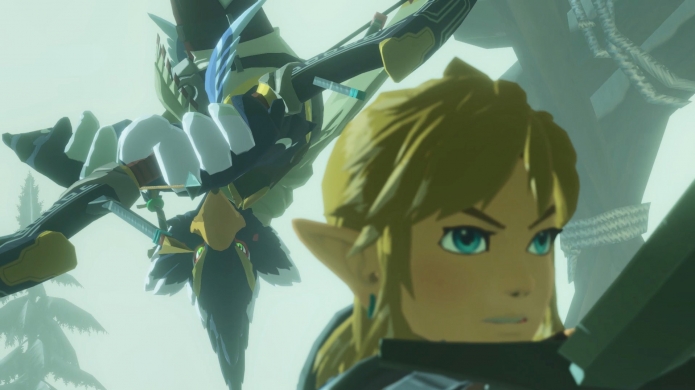 Framerate-wise, Age of Calamity is solid for the most part, with understandable dips when you fill the screen with an insane amount of effects. That said, even with the arrival of next-gen consoles I'm amazed by how much developers can push the Switch while still holding a mostly stable framerate. I did do some minor testing in handheld mode, and the resolution is a bit crunchy there as expected, and the framerate instability is worse too - but it’s still quite enjoyable.

It all looks wonderful, with missions building on the locations found in Breath of the Wild. Literally, because being set 100 years in the past means there are now buildings.


In the end Age of Calamity is more Breath of the Wild than Dynasty Warriors, and I’ve been purposely vague when it comes to the storyline and specific quests for good reason. Although they were far and few-between in Breath of the Wild, when you did get the ol’ cinematic it was pretty special. In Age of Calamity you have more of these, both in quantity and in terms of high quality production values. To the point where you can’t wait to see what happens next.