Dark fantasy as a setting for a dungeon based game rarely if ever lends itself to a great story driven experience. The key focus although centred on character, is really about your character, and their get-up and what weapons they have, if they are enchanted, and also if they have any decent spells or items or rare epic robes of fashionable killing power at their disposal. When played in co-op (online or in the same room) with a buddy or sibling, this character focus is again amplified, with the overall story featured in the game taking an even further back seat. Hunted: The Demon’s Forge falls into this category as you too may find yourself pre-occupied with wondering if the Crystal Bow is the best weapon in the game or simply opening your mail (of the physical envelope variety) rather than watching the final cinematic sequence. That’s not to say that this is a bad game, it’s just one of those games where skipping cut-scenes doesn’t really affect how you feel about it.

Now, if you were to walk past this game (which we’ll refer to as Hunted from here on out) at your local game store and picked it up to take a gander at the artwork and miniscule screenshots on the back of the box you’d probably come to the conclusion that Hunted was a fantasy based action-RPG. All the visual clues are there. There’s a scantily clad female archer holding a glowing bow, covered in tattoos including a tramp stamp in what one assumes to be ancient Elvish. Also joining her is your usual axe-wielding, bicep curling and follicly challenged warrior who looks both menacing and a little like a date rapist. Add to this a setting involving forests, caves, dungeons, and enemies that are a cross between orcs and other orcs, and your mind immediately looks to words like “generic” and “unoriginal”. But you also realise that a good co-op centric action-RPG is never an unwelcome guest, and hey this could actually be pretty good. 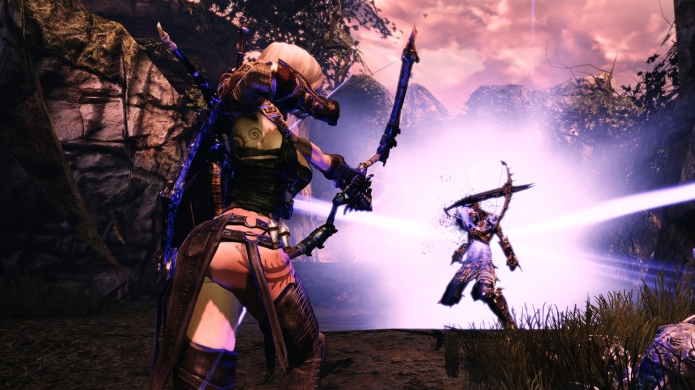 So, where one might expect the character progression to follow a staple template of levelling and looting and lining ones pockets with gold, the developer seems to have removed all real role-playing elements from the game in lieu of a more “Gears of War” approach. That’s not to say that the approach is more-action heavy, it means that this game borrows liberally and specifically from Epic’s Gears of War franchise, right down to the cover system, arena battles, scripted enemy entrances, and not being able to turn left or right properly when sprinting. And although you do find yourself picking up gold, as there’s no in-game store or town to visit to spend it in, it's pretty much a pointless inclusion or perhaps a development relic from when the game did feature a few more RPG elements. This also means that there is no real inventory system in the game, with weapons and armour upgrades being interchangeable only, and skill improvements one would associate with levelling being given to the player at regular intervals based on kill counts and other stats.

Initially the system feels a little underwhelming and almost a little too simplified to offer any real depth, but as your skills improve and better weapons and abilities become available Hunted begins to become a pretty fun co-op and action centric experience. With a choice of two characters to play: the ranged archer E’lara and the melee axe and sword wielding Caddoc, these two definable roles add considerably to the co-op experience, providing some semblance of battle strategy which includes some stable action-RPG and dungeon crawling staples like kiting and tanking. Adding mana and spells to the equation also helps separate the game from its initial “fantasy-based Gears of War” feel as players can buff each other as well as cast lightning and explosive spells at groups of enemies.

It’s a very simple and overall quite basic system but individual skills and spells like E’lara’s ability to freeze enemies with ice arrows allowing Caddoc to kill them in a single sword strike, and Caddoc’s whirlwind of stun and levitation move that allows E’lara to return the favour, add to the enjoyment. And although weapons are only interchangeable, adding limited use enchantment to the rarer weapons found the game means that you’ll be switching up and trying out new weapons regularly, helping add some variety to the game and some co-op discussion as to whom exactly should get the next weapon drop. But that’s also because inexplicably the game decides to spawn a weapon only for the character who hits the weapon chest, and it also likes to start boss battles the same second you find the rare weapon chest reward leading to one player accidentally hitting them both whilst trying to fend off a large beast or skeletal monstrosity.

Although there are countless questionable design choices in the game, and way too many to list here, very few -- apart from a ridiculously difficult final boss battle -- ever venture into annoying or game-breaking territory. In most cases they add to the overall scrappy nature of the game itself, one that doesn’t really feature any set pieces that are well, you know... memorable, or any lengthy sort of replay value. When played co-op, they can quite often be quite humorous and laughed at, which as strange as it sounds doesn’t detract from the experience. And when you’re done with the co-op campaign, you can then play the game’s Crucible mode which is a mix between Gears of War’s horde mode and a simplistic dungeon creation tool. But most likely the campaign would be more than enough time spent in whatever fictitious fantasy world this is set in.

It should be made clear however, that these references to ‘fun’ and enjoyment’ strictly apply to the co-op mode of the game, which thankfully is Hunted’s main selling point. In terms of playing the game alone, even though the partner AI in the game is surprisingly not-crummy, it definitely pales in comparison. As a corridor, hallway, dungeon, and other linear path based action game, the design of the levels themselves aren’t exactly memorable nor are the bland visuals that vary between looking pretty-good to looking like a game from at least five years ago. And in that sense the game really is only worth playing in co-op, where the fluid controls, half decent mechanics, some basic teamwork, and mindless action elevates what is decidedly mediocre into something that although average, can be a lot of fun.
Follow Us
Latest Reviews
More...
News Feed
Advertisement
Latest Threads
Log In
Create Account | Lost your password?