Absolution – the freeing of blame or guilt, removing consequences and obligations. An interesting title for a game that scores you on how you kill people. Hitman: Absolution may aim to provide depth to its sub-heading through its firmly guided story, but on a meta level it removes consequences and obligations from the player. Don’t worry about actually completing a level – we’ll take that off your hands and enact a cut-scene the moment you press Y at the exit door. Spent the entire level undetected with no kills? Why not kick back and watch us ruin your smooth run with a non-negotiable balls-up of your mission? The story is important, so stop your whining.

This is the attitude directed at the player throughout Absolution’s single-player mode. IO Interactive has a story to tell and it won’t let player agency get in the way. The directed narrative often ruins missions, taking the controller from your grip and putting Agent 47 into far too many action man sequences for any Hitman fan to feel entirely comfortable. Having Agent 47 as a front-on, walking, talking protagonist feels a bit wrong. We don’t need to like him, we just need to be him. 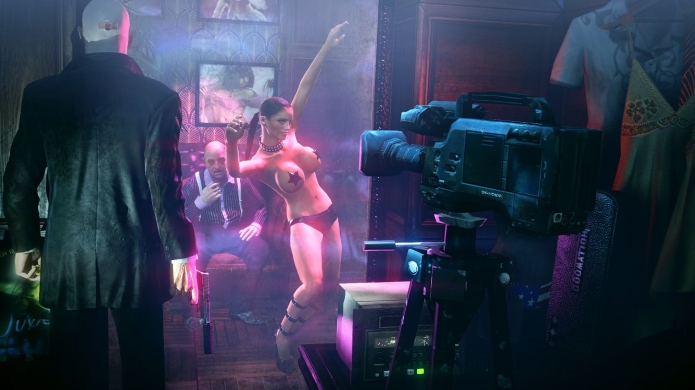 Whereas Blood Money felt varied, exciting and experimental – a “cool locations” tour funded by target dossiers – Absolution suffers from its straight shooting story. It is limited to similar looking locales, all of them dingy, rain-slicked and realistically cluttered. Even outside environments have a stained yellow tinge. This is in line with Absolution’s artistic direction, but part of what made Blood Money (and previous titles in the series) so interesting was the juxtaposition between the bright, sunny, everyday locations and what Agent 47 was there to do.

Absolution still has a Hitman feel, it’s just buried beneath several new layers. There is still the feeling of stalking your prey, following their movements and executing a plan. Bereft of the support of The Agency, 47 has fewer tools at his disposal and must rely instead on exploring each level and utilising what can be found in the environment. This immediately removes a large chunk of your sense of power. Absolution is more about finding and throwing a glass bottle to distract patrolling guards than it is planting explosives in a bucket of chicken at a wedding. It’s not until four hours into the campaign that you retrieve your iconic silverballers back. While explosives and the like can be scrounged in some levels, your first playthrough feels severely underpowered. Guards are inherently suspicious and more often than not your escapes descend into absolute chaos.

Disguises work a little differently. Whenever you pacify someone, be it through a sleeper hold or snapped neck, you have the option to take their clothes as disguise. All other NPCs wearing your disguise will be suspicious of you if you get too close. Their suspicion is represented by a yellow directional indicator and by repeating lines of amazing dialogue such as, “Hey, where have I seen that guy? Was it a movie?” Using Instinct (by holding RB) or backing off are your only options to avoid your cover being blown. If you burn Instinct, Agent 47 dips his hat and passes on through, but this depletes the resource very quickly. The other main use of Instinct is to instigate a tag-mode execution, where you enter into slow motion and tag enemies. This chews through Instinct even quicker than remaining inconspicuous, but it does look cool to take out three goons in one second. 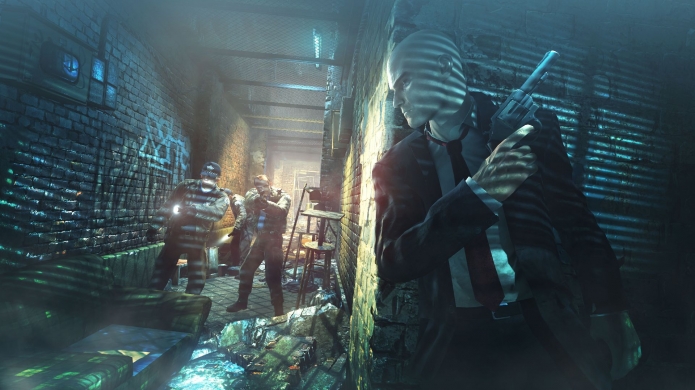 Instinct runs through the entire design of Absolution, primarily due to the new ability to hold down RB at any time and see enemy outlines and patrol patterns through walls. Think of it like Arkham City’s Detective Vision, only in a Hitman game. Yeah, it’s weird. The effect this has on the tone of the game cannot be understated. This is a game about using Instinct all the time. Patrol patterns and enemy placement are so dense and scattered in Absolution’s small levels that you need to use this ability to survive. It’s not an unpleasant ability by any means, but it changes how you play.

A wonderful thing about previous Hitman titles was how you could gauge the social awareness of those around you. Did she see me do that? Is she acting a bit weird? Should I keep going or stop for a while and observe some more? Instinct removes this layer completely, reducing NPCs to glowing red and yellow chess pieces. Knowing where characters will walk and whether or not they are the prime target strips back Absolution to a puzzle game with a plain board. The lack of social observation is keenly missed and reduces the impressive crowd system to nothing more than groves of people-shaped foliage to hide in.

Absolution is a competitive game. This is apparent in the money ranking that updates in real-time as you play missions. Information will pop up regarding the AU and Global average score for each level. As you play, Agent 47 levels up his skills and abilities passively and these increase your chances of doing well. Although it’s not made clear, you can also unlock and upgrade weapons using cash earned in the Contracts mode, the second half of Absolution. Your first playthrough of the campaign is meant to be sloppy. A difficult list of Challenges exists for each mission and it’s made clear that these require several replays in order to attain. They also unlock permanent score multipliers. It is unfair to judge the game on your first run, as it is entirely possible to complete levels quickly, messily and without much effort. You might feel that there is little depth, however, it’s upon replay, with new skills and knowledge at your disposal, that you’ll start to peel back the secretive possibilities to each situation. One level may have four or five clever ways to take out a target with no dirt on your hands. If you are a competitive player, there is depth here for sure. 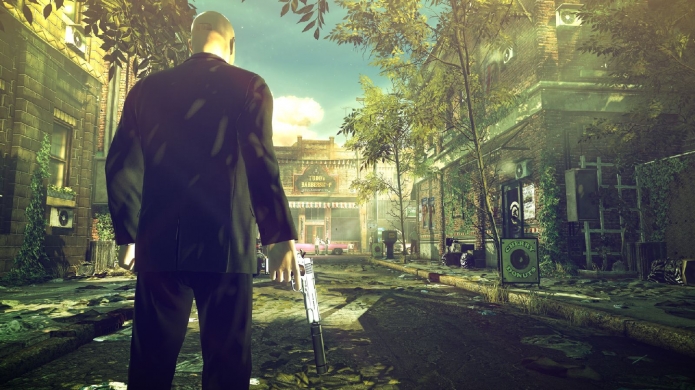 Contracts is a player-directed high score challenge for any mission and combination of targets. To set a challenge, you enter a level of your choosing, tag your targets and take them out. This sets the score to be beaten and the targets that other players must eliminate. New challenges will be set by players all the time, with the creative and difficult ones no doubt rising to the top of the list. Contracts highlights the tight sandboxes of Absolutions environments, as well as the complex interplay between NPCs and their environment. This mode will need time to breathe before we can be certain of its longevity, but it is presented well and the option to set up personal challenges with invited online players should provide some interesting rivalries between global audiences as well as just between friends.

Hitman: Absolution has muddied its waters. The story is interesting enough and full of wacky characters and situations, but it has lost that clinical, professional feel that the series perfected in Blood Money. Levels are simpler and smaller in scale, with the game taking control away from you at crucial moments, turning the story into directions that bely how you acted during the interactive portions of gameplay. Disguises become frustrating games of avoidance, to the point where it’s almost easier to just stick with Agent 47’s suit.

The lack of powerful tools has an impact on how you can interact with levels, making your first run through the game a very direct and personal one. Only through replays are the nuances of each situation revealed. This may sound like Absolution is a bad game. It isn’t – it’s just a bad Hitman game. Features bleed from other games and the bizarre need to position Agent 47 as an action man with feelings and a rough moral code has diluted its identity. That said, there is deep replay value, both in the single-player and Contracts modes. The challenges will keep you playing singular levels for hours and we will no doubt see some amazing hits come to light over the course of the game’s life. Contracts will be the main reason to keep Absolution in your console, and we can smell the extended DLC for this mode already.
Latest Comments
Link