The MOBA (Multiplayer Online Battle Arena) is this decade's shooter, the sort of ubiquitous experience almost everyone has dabbled in before they return to their game of choice -- FIFA, NBA 2K or Madden.

It's almost par for the course at this point to answer 'yes' when someone asks if you've played DOTA 2 (Defense of the Ancients 2) or LOL (League of Legends) -- and just as often, you might follow up with 'it wasn't really for me'.

That's not to say those games aren't popular -- they're overwhelmingly popular, commanding tens of millions of player's attention and dominating eSports coverage as the primary platforms for competition. If you're already gripped in the throes of a DOTA 2 or LOL addiction, in fact, Heroes of the Storm probably holds little appeal for you. But if you thought those games weren't for you, or you haven't yet tried a MOBA, Heroes of the Storm deserves your attention. 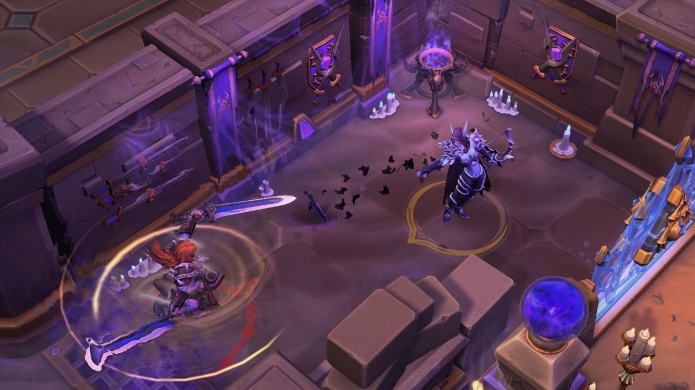 The MOBA standard is at play here. Two teams of five compete on symmetrical maps to destroy the opposing team's core. Each map is split into lanes and jungle areas, with AI creeps in the lanes and slightly tougher AI camps in the jungle. The lanes have towers, used to defend the core against the creeps, and in Heroes of the Storm you can kill the camps to turn them into extra creeps. Players battle across the map to destroy the towers and eventually the core.

That's the basics of essentially every MOBA. Heroes of the Storm does a few things different, however. For example, XP is shared across an entire team no matter a player's individual contribution. So you'll never wind up with one player significantly ahead of others on their team in terms of power. There's no Last Hitting, a common thread in other MOBAs where players get boosted XP and Gold if they deal the killing blow -- there's no Gold at all in Heroes, and no items either. Which means builds are refined via skill choices only -- which Heroes expands and augments somewhat by giving players new skills until level 20.

These things give players the sense of superficial simplicity compared to other MOBAs. Immediately it feels like something is lacking, because the many elements players need to keep track of no longer exist. There's no need to focus on killing creeps -- simply staying in range of them when they die is enough to earn XP. There's no buyback option to agonise over -- when you're dead, you stay dead until your time is up. There are no items to purchase and upgrade at all, so as long as you know the sort of hero you want to create you don't have to worry about visiting a shop.

Dismissing Heroes as a simplified MOBA is a mistake, however, because Battlegrounds create a subtle complexity many miss. Where most MOBAs have one map (and some variations on that same map), Heroes of the Storm has eight, all of them quite different. This is where Heroes takes charge and demonstrates the innovative creativity Blizzard is renowned for. 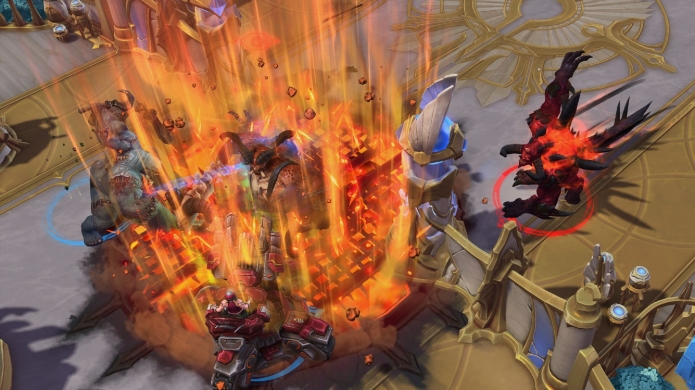 Battlegrounds in Heroes have their own personalities both aesthetically and functionally, and each one creates different objectives for each team. On Cursed Hollow teams compete to capture king of the hill style zones which randomly spawn around the map, and once a team has three their enemy's creeps and towers are ineffective, creating a significant shift in the lane balance. On Haunted Mines there are just two lanes instead of three, and teams must descend into the Mines themselves to capture skulls and power their golem -- the team with more skulls has a more powerful golem and an advantage.

This is the essence of Heroes of the Storm, this is what makes it so compelling. Knowing battleground strategies isn't enough -- you need to know how your hero synergises with the battleground, and how your enemies can take advantage of it as well. Sgt Hammer, a siege tank from StarCraft, can do damage from long range -- this makes her perfect for stopping the Webweavers on Tomb of the Spider Queen or for destroying the Guardians on Sky Temple. She's slow though, which means she's susceptible to ganks in the long lane on Blackheart's Bay. Sylvanas can shut down towers, minions and mercenaries, allowing her to create a huge advantage for an even Golem on Haunted Mines. On Tomb of the Spider Queen she can fall to a gank quite easily, however, thanks to the low visibility.

Heroes of the Storm hits its stride here, because the player character management required to succeed can change dramatically from map to map. The complexity absent from the micro-management aspect of the game is replaced (to a degree) when players take into account the various priorities implicit in each new battleground. Do you focus objective or should you capture a mercenary camp? When is the right time to stop capturing tributes on Cursed Hollow? Which player on your team should become the Dragon Knight?

These things create knowledge gaps between players which are only filled with experience, allowing you to grow the more you play the game -- essentially the essence of a good MOBA game. So the simplicity is there, but it's primarily superficial -- ultimately, Heroes is as good a MOBA game as any, it's just different. 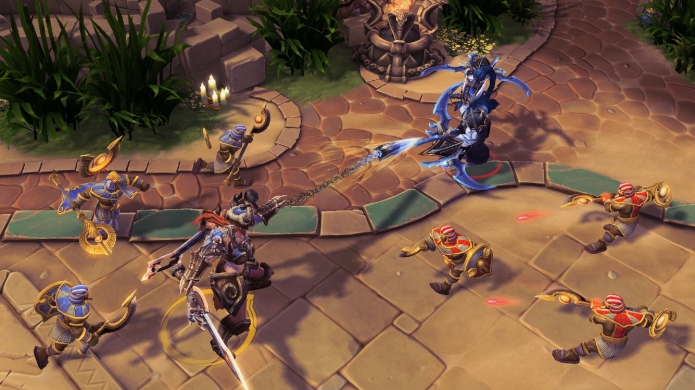 The problems MOBA games face aren't absent in Heroes either. Gaps in knowledge create have/have not situations in all MOBAs, and Heroes of the Storm is no different. And, like all MOBAs these gaps result in toxicity, where players will treat their teammates impolitely based on knowledge gained either inside the game or via 'the meta' (conversations held on forums outside of the game where players min/max character builds and strategies based on information gleaned from watching 'professionals' play).

The reality is, this will exist in every MOBA game ever. People are, invariably, arseholes, and they're not going to stop being arseholes just because they're playing a game with others. In MOBAs, your individual success is secondary to your team's success, which means a bad player reduces your enjoyment (if your enjoyment hinges on competitive victory). And because communication is vital, Heroes of the Storm can only attempt to shape its community through punitive measures -- by punishing caustic players -- because they cannot remove the ability for players to talk to one another.

It's not Heroes of the Storm's fault that people are arseholes, but it is the nature of the game experience -- if you have a bad game, people will probably get up in your face about it.

Nevertheless, Heroes of the Storm -- like many MOBAs -- creates a highly addictive, extremely satisfying experience in spite of the bad apples in its community. It does this by exploiting progression mechanics in fast-forward -- you feel the sense of accomplishment many RPGs give you very quickly, usually in a space of about 20 minutes, because you gain levels rapidly. Outside of the in-game experience the game is a little less accommodating, especially on the road to "Hero League".

You need to reach level 30 as a player and you need 10 heroes in your stable if you want to take part in Heroes of the Storm's competitive matchmaking modes, and if you don't pay real money that can take quite a bit of time. Player levelling slows down significantly post level 15, but that's not a problem -- it just means that those who enter Hero League will have a significant number of hours under their belt. But Gold, which you use to buy Heroes, is gained a very slow rate, and it can be difficult to earn enough to buy enough Heroes before you reach level 30. The alternative is to spend real money to buy heroes -- which, if you're spending hundreds of hours playing the game might not be unpalatable to you -- a value judgement you need to make on your own.

Like I said earlier, if you're already 1000 hours deep into a League of Legends or DOTA 2 addiction, shifting to Heroes of the Storm will be like playing on autopilot. The depth of Heroes is such that there is little more to learn for experienced MOBA players and a fair bit to forget, like playing Checkers on a Chessboard. Except Heroes isn't Checkers, it's Chess. And DOTA 2 is that Tridimensional Chess they play in Star Trek.

If you couldn't get into DOTA 2 or LOL though, Heroes might be the game for you. It has a sneaky depth to it, a crafty addiction about it, where you'll start out just playing a game a day and then suddenly you're browsing the forums on your phone during the intervention your wife is holding because your addiction to Heroes of the Storm has affected her in the following ways...