There's a lot riding on Heavenly Sword for Sony at the moment. With Xbox 360 still kicking ass (with the likes of Halo 3, BioShock and more), and Nintendo's Wii leading the charge, there has been very little – currently available - on Sony's new console to warrant much interest. Sure there are big name titles on the way such as Assassin's Creed, Haze and Metal Gear Solid 4, to name but a few, but in the interim, there just isn't a lot available on the PS3 that hasn't already been released elsewhere. To this end, Sony have really needed to come to the table with a steady flow of titles (exclusives, no less) to show the punters there's more than enough reason to shell out a thousand bucks for their new system. Thankfully, it looks as though the big black machine's dry-run of games is coming to an end beginning first with Heavenly Sword. 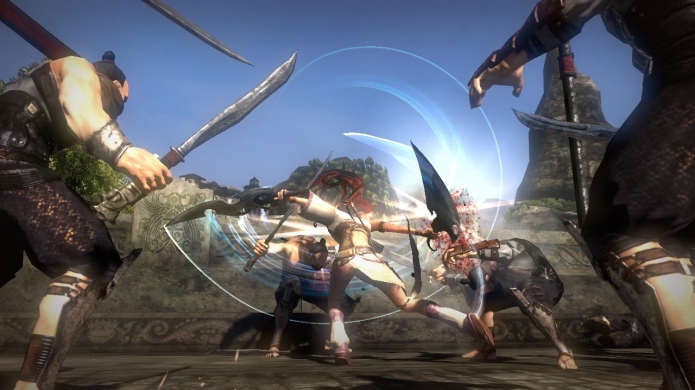 Now, you may have read or heard among the traps that this is essentially "Goddess of War", which is a pretty fair call given the similarities between the game engines, fighting systems and overall presentation. However, it does a fair amount of stand-alone stuff to keep it just out of reach of the GoW series thanks largely to the larger than life story and its cast of kooky characters. Heavenly Sword also represents a technical leap forward in the way we view game characters emitting emotion. But before I get into the visuals and animation, it's best to give you some background on these characters you're going to grow to love and hate.

For the majority of the game you'll play through as the main character Nariko, the first of two girls born to Master Shen, head of a clan who have been charged with protecting the "Heavenly Sword". The only problem with this is Shen never wanted girls; the task of protecting the sword was for men, being graced with only females meant Nariko's birth was taken as an omen by Shen and the clan, or as she puts it, "I was born a portal of doom". However, Nariko has manifested an inner strength through this to prove to herself, her clan and her father she is not weak, and most certainly not a portal of doom – this is demonstrated in the very early part of the game which sees Nariko and her other clansmen fighting off the armies of the relentless warlord, Bohan. Bohan has been after the sword for years and his constant stabbing at Nariko's clan has left them severely outnumbered and left with no choice but to run. Before all of this though, we're given a glimpse at what could be seen as a possible future for Nariko, five days from your first proper encounter.

While the game's story is most certainly inspired by such classic works as Hero, House of Flying Daggers, Crouching Tiger, Hidden Dragon and more Eastern movies, the way in which it's presented is in pseudo homage – the actors all sport English and Australian accents and all look very European (with the exception of Master Shen). Equally, the dialogue and overall story feel more Western in style, despite the game-world’s many locations looking very Eastern. It's an odd juxtaposition and builds both an uncomfortable and unique plane – it's not quite as detrimental as say, using Tom Cruise as a lead actor in a movie called The Last Samurai, but it doesn't give the game enough consistency to be believable. However, this works in favour of the aforementioned 'kooky' characters. At times it's difficult to know whether or not Ninja Theory were creating a comedic tone over a serious one, and throughout the game you'll constantly feel awkward towards characters such as Bohan and his minions, and amidst all this you'll constantly wonder what to take seriously.

The serious side to the game then comes in the form of its robust fighting system which, as mentioned earlier (and in countless other reviews) borrows heavily from the God of War series. This means you're constantly working towards building combos against the seemingly endless hordes coming at you, while unlocking new combos, and building up your power meters. There are three stances available to you when fighting – Power, Speed and Range, and like rock, paper, scissors, each one is powerful against another and weak against another still. Building power comes in the form of Glyphs which allow you to perform style moves on opponents and like God of War, these are either triggered by the push of one button, or a combination of buttons via on-screen prompts. Equally, various action moments throughout the game will also require you match the on-screen prompts and for some reason, despite most of the enemies and puzzles you face being of almost no challenge, the response time to the prompts is incredibly unforgiving forcing you to either face a portion of a boss-battle again (with the boss accruing more health for your slow response), or repeat an entire action sequence again. 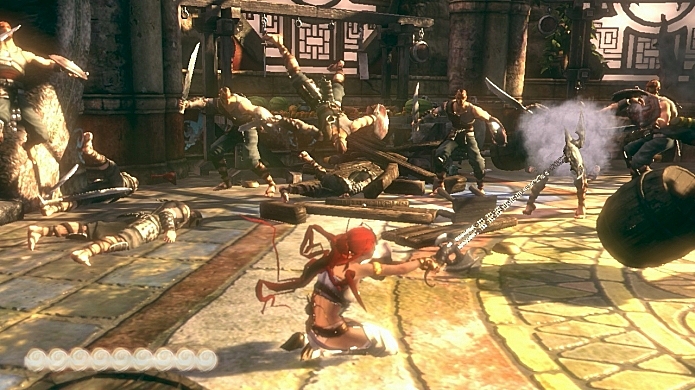 With all that said though, Heavenly Sword still poses something of a split style of gameplay. On the one hand, the off-the-wall story, dialogue and characters (Bohan and his crew remind me of Skeletor from He-Man when interacting with his oddball henchmen) offer a quirky and somewhat unique element to narrative and wanting to kill people (by the end of the game you really just want Bohan as dead as dead can be). On the other hand, while the fighting system is pretty cool and well-balanced it loses out to predictable AI and the unforgiving style move prompts or action sequences. Moreover, the 'puzzles' in the game are barely that and offer almost no challenge whatsoever (these guys have nailed it, actually). All of this paints an inconsistent picture for Heavenly Sword, but thankfully there is a silver lining to the game's detrimental balance in the way of its stellar motion-capture and incredible lip-syncing.

If there's one thing Ninja Theory got right it was bringing Andy Serkis into the fray. It's abundantly apparent his skills working with WETA on both the Lord of the Rings trilogy and King Kong have helped shape the dramatical direction of Heavenly Sword – specifically within each character's facial animations. According to Nina Kristensen, co-founder of Ninja Theory, the entire motion-capture and lip-syncing stages were actually performed at the same time. This way of animating is never done, and the team have set a precedent here with a game that delivers some of the most in-tune lip-syncing ever seen. On top of this, while decidedly over-the-top, the acting is great and knowing the voices and movements are being captured at the same time gives the game a far more organic feel. The animations for things like brow movements, lip movements, eye movements and more really bring the characters to life and it's in this particular area Heavenly Sword shows us a glimpse of what the future holds for daring studios like Ninja Theory.

The problem here though, is while it is engrossing to see videogame characters emote in this way, cut-scene animations don't make up a gameplay experience, and it's in playing the game things are a little choppy for a solid foundation. The action is good, and watching hundreds of enemies come at you from a distance is really a sight to behold, but the mindless puzzle-solving and equally mindless AI bring things down more than a notch or two. And finally, while the system is sound, having such an incredibly close engine to God of War has taken away much of the uniqueness of Heavenly Sword. Still, there's some fun to be had here, especially for PS3 owners looking for something new to sink their teeth into, just don't go expecting anything ground-breaking beyond the game's animation system.
Follow Us
Latest Reviews
More...
News Feed
Advertisement
Latest Threads
Log In
Create Account | Lost your password?