It’s been odd not seeing more Deathrattle decks after the Naxxramas content finished opening up for everyone. There have definitely been a few awarded cards thrown into my regular challenges against others here and there, but I honestly thought more people would have built Deathrattle-heavy decks after gaining all the solo content had to offer.

Actually, that’s a good point -- all it has to offer. From a gameplay and paid perspective it’s an even split. 700 gold per wing (with the Arachnid Quarter being free for the first little while, and even now still) or real-word dollars to unlock them individually, or all at once. How you choose to do it, honestly, will be based on how you play -- if you’re the sort of person who spends their entire time in Ranked play, even for Dailies, then you’re going to wind up pitching in out of what you have in your Hearthstone currency. If you’re keen for a break from humans and their more random Hearthstone ways, then it’s a decent outlay of cash for quality presentation, empowering rewards and an off-kilter look at a game that has become marginally structured based on its base ruleset. 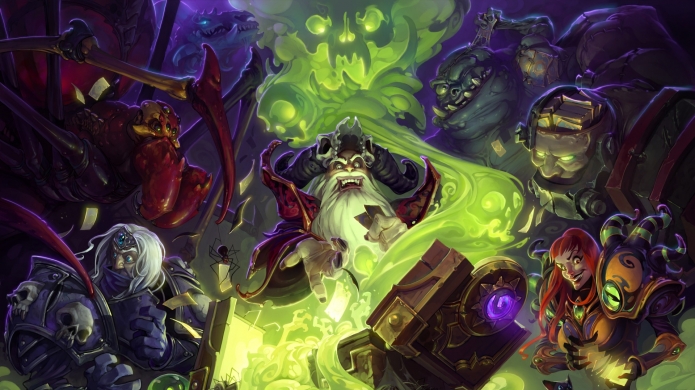 The Arachnid Quarter is the first tier of the content but at this point the entire thing is open to you, regardless. Your first boss you’ll face when you fire up the content is Anub’Rekhan -- a spider with Warcraft history that might very well be lost on many, but is a great place for the campaign to start, regardless. He also sets the tone for the presentation that follows, and it’s full of character.

This is a standout point for Blizzard’s digital-only CCG, and they utilised the platform they deliver the game on as a means to shout from the rooftops that they’re game, game-world and presentation are nothing like other entries in the genre. Naxxramas is filled with character and personality; humour and fun. The boards you’re playing on are dark and dank, they look like they’d smell but the bosses who inhabit them are goofy and sometimes a bit ridiculous -- exactly how we like it. This is a meta-game built from a high-fantasy based RTS and MMO, which often doesn’t take itself seriously, so it all fits and feels natural here.

You might want to come equipped with a deck built to handle a lot of Deathrattle, because that’s how things begin and end in Naxxramas, and then you definitely want to play the next boss, Grand Widow Faerlina, with as low a set of mana cards as possible. Her power, Rain of Fire, which costs only two crystals unleashes a barrage of missiles on your hero, the number of which equals how many cards you currently have in your hand. This means over two turns early in the game she’s capable of around five damage a turn -- it can be very frustrating to deal with.

The ebb and flow that stems from each boss is that it really boils down to their Hero Power and how you can best defend yourself from it, or overcome it with your own chosen class. I managed to knock out almost all of the bosses throughout the campaign with my Hunter deck, though I did have to bust out my Warrior and Mage at a point or two, but I never actually changed my initial decks. That’s on Normal though, and what this solo campaign offers is plenty of replayability in harder difficulty levels and class challenges. The class challenges are relatively easy if you’ve been dabbling in the game for a while, but if you’ve avoided sinking your teeth into a particular class during your romp, I’d argue that the class challenges here are more fun, rewarding and better to learn off than the practise space ever was.

Heroic then is where the bread and butter lies for the more hardcore players out there, and it’s in these I discovered you do need to tweak decks or even rebuild from scratch. They sort of sit off to the side for me as added challenges now (as I haven’t beaten them completely) should I be sick of Ranked, Arena or Casual and remind me that in order to get better I really need to start thinking laterally about how I combo my cards and build out my decks.

The five-week rollout of the content was probably the best idea to keep everyone on a level playing field, but given you could actually defeat a wing in a relatively short amount of time, it made waiting for the next wing a bit of a drag. It’s a double-edged sword, because allowing people access to everything all at once would have created a bit of an unfair playing field in human vs human play where the better CCGers are concerned, so it made sense to do it this way. In future expansions like this then, I think more solo content tied to bragging rights as opposed to new cards could be better, but given the overall price of this content I’m pretty confident we got value for money regardless.

The next step is what’s next from here? There’s plenty of content to pull themes and bosses from in the world of Warcraft (see what I did there), so it’s really anyone’s guess. But after having a taste of solo play against entertaining bosses I feel like it would be in the interest of players like myself for Blizzard to explore adding to the solo tab more regularly, while also building out bigger expansion-style campaign events every few months or so. It doesn’t always have to be about chasing cards, it can also be about entertaining ways to learn the nuances of this wonderful game through meaty and enjoyable content. But if Naxxramas is just a taste (and test) of things to come, Hearthstone continues to look vibrant and healthy.
Latest Comments
No comments currently exist. Be the first to comment!
Commenting has been locked for this item.
Follow Us
Latest Reviews
More...
News Feed
Advertisement
Latest Threads
Log In
Create Account | Lost your password?