Well, specifically Goblins accompanied by other enemy types, but on the whole, the thieving little terrors are super-annoying. They steal your shit, then run around you playing a sick game of keepings-off. And you need to chase them, which means you're likely doing your best to avoid those other enemy types, while trying to kill the Goblins just to keep your precious stuff from being stripped away from you, and all within a time limit. Problem is, playing chasey while being attacked from all angles and ‘managing’ your companion, at the same time, can feel a bit like spinning plates.

Nail these encounters, and you'll feel relief and maybe even empowered. But lose them and you can wind up with little-to-no coins, foodless, better-than-base-weapon-less or worse, dead.

And all because of fucking Goblins. (Though, once you hit Goblin Town, it’s all gravy.) 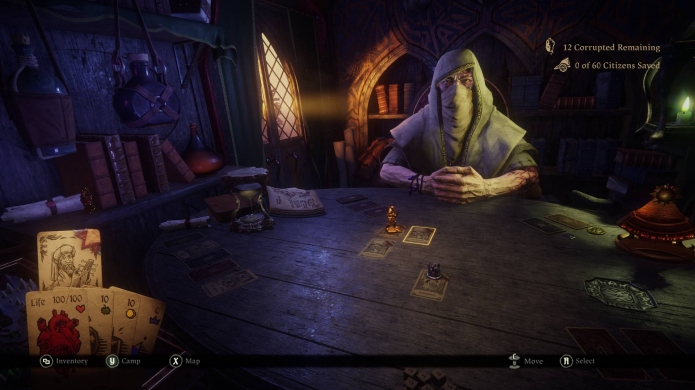 This is Hand of Fate 2. And it’s amazing. Infuriatingly amazing. It’s also Australian-made -- hopefully a point Australian games writers won’t need to keep spouting as this series grows, because it has some serious legs if you consider the growth between this latest release and the original game.

On the surface, not a lot has changed. This is a Roguelike-esque experience with cards. It’s not a CCG. It has combat and puzzle-solving, it employs a greater emphasis on player-input on the chance portion of the game (either a narrative ruse concocted to bring “The Dealer” even more to life, or a happy coincidence), and it’s ever-playable. In fact, if you want a game that’s going to engage you over and over again -- with player-invested differentials -- this Holiday period, I can’t recommend Hand of Fate 2 enough. It has challenge; it’s difficult, but there’s the always-frustrating hand of chance, bolstered this time around with the inclusion of Dice and a Pendulum mini-game that’s all reliant on you, as well as new card games. The Dealer tracks your progress through all of these activities, too. He never forgets, and reminds you of that throughout. 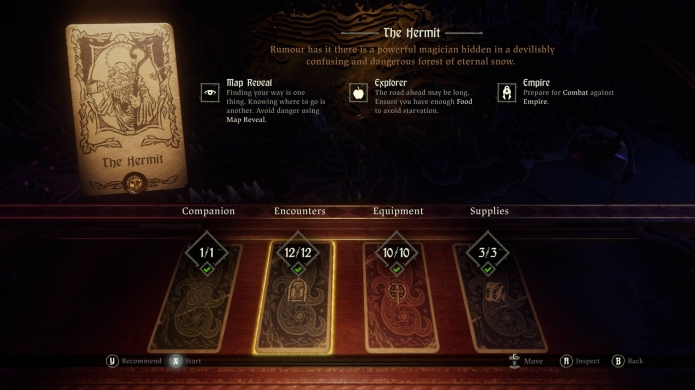 Challenges (ie ‘maps’) vary and have variables you can attempt to account for, such as loading up Encounters with cards that feature, say, Map Reveal if the challenge is one centered around making you walk in figurative circles, for example. Or you might need a set number of Blessings, or defense in order to achieve the gold tier of the challenge, which means you can add Equipment, Supplies and appropriate Encounters to help facilitate this. And while the deck is still shuffled, you as the player are given some agency to help forge parts of your quest, yourself. It's brilliant.

Where the game dips is in some of the combat (though I think it’s better than the combat in Shadow of War, to be honest), and in its chance component. But that’s largely uncontrollable -- this is effectively a tabletop game come to life, in all fairness (heh). But the game -- or more importantly, its Dealer -- isn’t afraid to dig the heels in. Hand of Fate 2 might have a few technical issues when it comes to transitioning between points of gameplay, or in some combat (actually, the boobytrap levels are among the worst for performance), but the polish in its presentation and how the Dealer plays out is top-notch.

So this time around players not only have a companion with them, but those companions also come with compelling Encounters of their own. They also bring with them a unique ‘buff’ if you will which goes a long way towards how you gear your Challenges. Moreover, they react differently to each challenge based on their own background. In many ways, this is a larger exponent of the RPG element the team has clearly wanted to add to what is largely seen as a Roguelike experience (and it’s honestly not). In fact, closer to the game is the classic Fighting Fantasy series of books from Steve Jackson and Ian Livingston from back in the day (they would go on to help make the European arm of Square Enix). 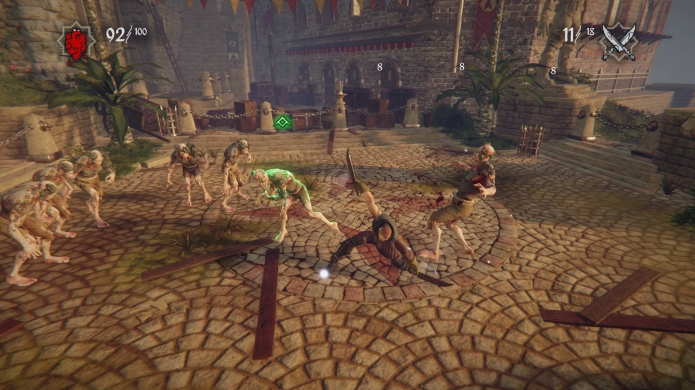 In the first game, emphasis was centred around gaining new tokens, which unlocked new Equipment cards, or new Encounters, and sort of helped expand progress. Tokens still exist, but they’re in lesser supply this time around, because they’re balanced alongside how you manage your Encounter and Equipment cards ahead of each challenge. And where in the first game you were essentially just engaging in a random gauntlet, this time around the game’s myriad Challenges craft new and unique experiences. How the team at Defiant has balanced the random and chance parts of the experience alongside player input is incredible. The mind boggles at just how good this series could be with a Triple-A budget, because even on a partially government-funded budget alongside their own investment, it might be one of the best games ever made in Australia.

It does have its faults: in combat, oftentimes you can get caught between a defendable action you have control over, against an indefendable action, all happening at once, which means you’re kind of damned if you do, and damned if you don’t. Hiccups in framerate (on Xbox One X) can also delay inputs and timing, and if you’re an Arkham series combat specialist like me, these seemingly minor issues are amplified all the more. There are also some issues with sub-editing given how much writing and reading is involved in the game, but this is an Indie title at the end of the day and against some of the ‘bigger’ games released this year, Hand Of Fate 2 100% holds its own (and then some). 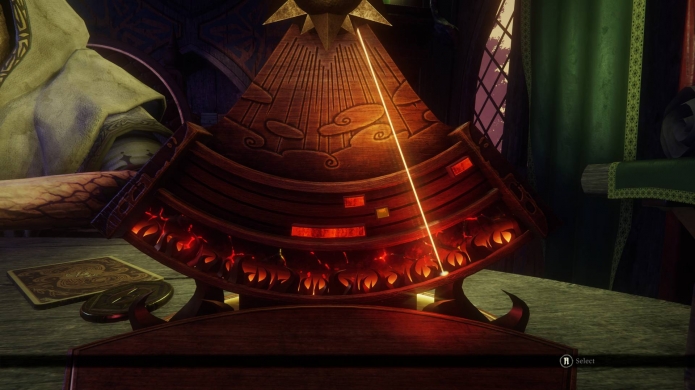 Also writers of said game reading this review, I could not unread Metalocalypse in place of Malaclypse, the companion. Not everyone knows what Metalocalypse is, but given the shape of Malaclypse’s ‘lute’, I assume it might have been a homage of sorts, but it made reading anything around his expanding story really hard and difficult :P (largely because I love Metalocalyose, so it's my fault).

In the end though, what you get with this budget, Australian-made title is a game with endless challenge, with a sense of direction not necessarily ever seen in a wholly-made local product, and a lot of fun. Anthony Skordi returning as the ‘beaten’ Dealer serves up arguably the best voice-acting performance of the year and the game’s overall presentation and polish, outside of the negatives mentioned above, belie the budget constraints Defiant likely faced. This is mature and confident game development in a genre they’re pretty much crafting on their own at the moment. Honestly, I can’t recommend Hand of Fate 2 enough.