2004 was a hell of a year for first-person games. Hotly anticipated titles such as Half-Life 2, Counter-Strike: Source, Doom 3 and Unreal Tournament 2004 lived up to the hype, while there were some pleasant surprises from the likes of Far Cry, Star Wars: Battlefront and The Chronicles of Riddick: Escape from Butcher Bay. For the original Xbox one, there were few games more keenly desired than Halo 2: a game that sparked a legacy of improved gameplay mechanics, multiplayer matchmaking and, unfortunately for Bungie, the trend of Halo games to leak online before official release.

Despite its accolades and hundreds of hours lost in Halo: Combat Evolved, I never bought into the Halo 2 love. Of the many games in the series, it’s the game I’ve spent the least time with on release, and it was the game that almost fragged a 2012 Halo marathon I had because of how angry it made everyone who was involved. During that play-through I was reminded of everything I disliked the first time I played it: minimal time on Earth, frequent instances of poor navigational cues during the campaign, a cliffhanger ending, and Gravemind. 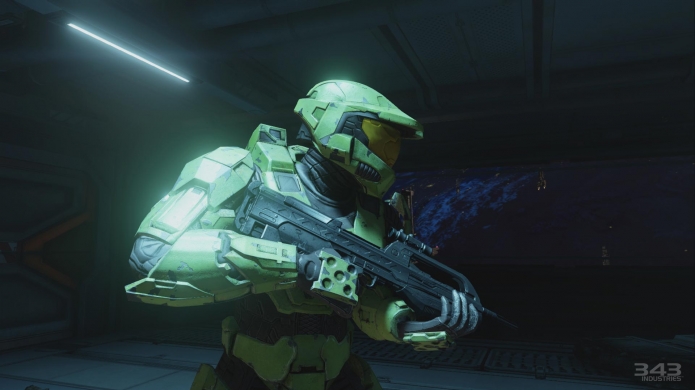 Regardless, the biggest gripes of my Halo 2 campaign experience are mostly negated in Halo: The Master Chief Collection. Limited time on Earth and that frustrating cliffhanger ending don’t have the same impact they did 10 years ago, because immediate closure and ample Terra Firma time are available in Halo 3, and 343 Industries has added some subtle (and obvious, in parts) directional cues to keep you on track. Gravemind is still there, but anyone that feels similarly about him can skip his sections entirely, thanks to the open structure of The Master Chief Collection.

Out of the box, players have access to Halo: Combat Evolved Anniversary, Halo 2: Anniversary, Halo 3 and Halo 4. As has already been flagged by Microsoft, there’s a 15GB download required for all multiplayer functionality (including cooperative play, according to my experience), which means you should absolutely preload all of that now if you want to play on launch day. On top of that, some bizarre downloading things were happening with my digital version of Halo: The Master Chief Edition, which claimed to be 45GB, to create around 150GB of downloadable files. I know these had to be attributed to this particular game as the Xbox One’s bandwidth tracking information confirms this data was only downloaded this month. Considering I only turned on my Xbox One this month to review The Master Chief Collection, that’s a hell of a lot of data to download for a single game.

Hopefully, that’s an isolated anomaly for me (I’ve reached out to local PR for comment). In terms of the games themselves, they’re presented in Full HD at 60fps (except that Halo 2: Anniversary is 1328x1080 at 60fps), which makes for an interesting Halo experience as it feels not just more fluid (obviously) but faster, too. Halo 2: Anniversary is visually comparable to Halo: Combat Evolved Anniversary now, which is a significant boost, given the ambitious nature of the array of set pieces Bungie was shooting for in the 2004 release on Xbox technology. 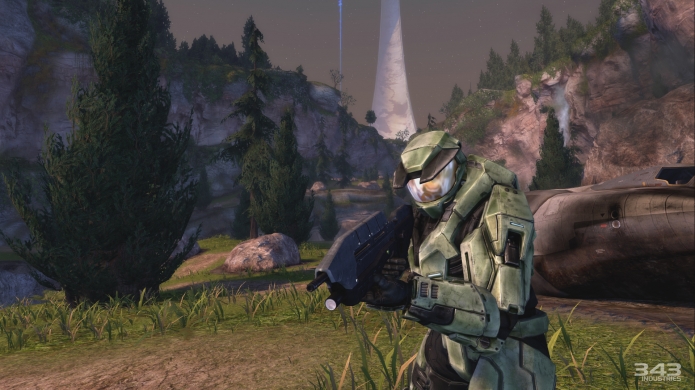 That’s not to say it looks amazing, just a whole lot better than the original, with the option to instantaneously switch between original graphics and the updated textures at the press of a button. While this makes for a fantastic point of reference, it also highlights the inherent drawbacks of dropping prettier textures on top of an ancient game engine, or running two engines simultaneously (as was highlighted by development director Frank O’Connor in a Neogaf thread).

The jilted character movement animations (particularly the humans) are better suited to the lower texture count, while at times the older textures have more detail than the newer alternatives. I found myself switching to the original visuals during darker sections of the game for better navigational clarity, which also highlights the strange absence of in-game brightness options for the entire Collection. That being said, the visual bump is particularly impressive for replacing bland or non-existent backdrops and for showcasing a sense of scale that bolsters the epic scope of the Halo 2 storyline, even if missing character shadows and other visual oddities happen more often than they should.

More impressively, the sound design has been given the surround-sound treatment, with what equates to an almost entirely new soundscape. New weapon sounds in particular add bigger oomph to the arsenal, which makes them feel even better than they did in the original game, while a newly recorded soundtrack builds and improves on the 2004 score in every respect. Combine all of this with the beautiful new cutscenes (including some extended sections) alongside discoverable supplementary videos that enrich the backstory (unlike those found in Combat Evolved Anniversary) while adding to the future of the series, and 343 Industries showed me how fantastic the Halo 2 campaign really is.

This is mostly thanks to Bungie in how it continually one-upped itself in terms of shifting the game between increasingly epic set pieces. For some inexplicable reason, the AI is noticeably stupider on Normal in Halo 2, though, while friendly AI is consistently daft throughout the series. Elites are still terrifying on the same difficulty setting in the other games, but there’s a lot of enemies standing around that feels out of place. It’s worth noting this can be easily remedied by upping the difficulty level, or pushing the challenge factor even further by activating series-favourite skull difficulty modifiers, all of which are unlocked from the outset.

There are still occasional visual oddities and rare sound mishaps, but it’s a solid sensory experience for the most part. Such is the achievement, that it makes Halo 3 and Halo 4 look slightly less impressive by comparison. Neither of those later entries into the series have received a visual overhaul, and they play out exactly as fans will recall from the last time they played through them, with persistent and unfortunate noticeable rendering issues, particularly at range, and weird moments where the frame rate would noticeably drop during certain loading sections, in solo and co-op.

These technical issues happen regularly enough to distract from the engaging gameplay and sweeping military sci-fi, but never frequently enough to fully break immersion. On top of the dozens of hours of campaign content, there’s clever leaderboard integration that encourages players to compete against friends, or anyone else in the world, for the fastest level times and highest scores. In terms of multiplayer, fellow freelancer and Halo fan Naren Hooson has sunk some hours into the new mode and had these thoughts to add to the AusGamers review.

On top of all the chapters included in the campaign, a multitude of multiplayer options are essential to a collection of this magnitude! All of the previous multiplayer maps are included, plus a few “new” additions in the form of rebuilt maps. Not to mention Halo: Combat Evolved maps playable on Xbox Live for the first time. 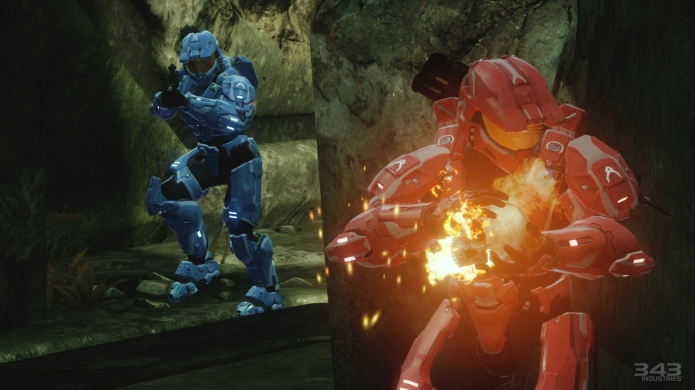 It may appear as a nostalgia-driven endeavor but I truly hope this release gets a lot of new players on board and into one of the multiplayers that, I believe, paved the way for many that followed. Having them all reissued in this bundle lets players revisit this unique arena combat as it originally was, only now updated to 1080p at 60fps.

Players are challenged to switch up styles within a plethora of maps and game modes with the given weapons and vehicles. The focus with Halo multiplayer is balance. A balance of power and options. Using what you’re given in the map to achieve an objective, even if that’s highest kill count. So if someone gets a hold of the energy sword or shotgun, it’s a matter of finding the right combo to eliminate them from enough distance without them getting close enough to act. Similarly, a sniper or someone wielding a rocket launcher needs to be addressed another way entirely. Using all the elements that every player is given equal access to on a given map makes this possible and allows players to be creative in all the situations faced.

Even jumping into old Halo 2 maps, and even Combat Evolved, in team or free-for-all Slayer was great value. Where it could have easily become monotonous and tedious, a peppering of weapons and vehicles on the map got players utilising these in different ways from kill to kill.

Of all the previous games, Halo 2 has received the most attention. And justifiably so. It was the one that kicked off the multiplayer in a huge way and set the tone for what was to come. Six maps, such as Sanctuary and Ascension, have been rebuilt with almost identical layout and only a few tiny feature changes but completely new visuals. And while the old maps are still a lot of fun, seeing them reworked is a refreshing addition.

Some of the earlier maps did have a few characteristics of an older game (which could have just been some unironed creases that are easily fixed with an update) but this was barely noticeable and, as with any truly good game, those elements make you accommodate and adapt your playing style in a way that keeps it fun.

With regular matchmaking in Find a Game, Custom matches, Forge for map creation and Theater to rewatch games in full (or even Xbox One’s “record that” feature for smaller snippets) all on offer, there’s plenty to keep most of us entertained for quite some time. I can’t wait to delve deep back into the world of Halo, Multiplayer and all. 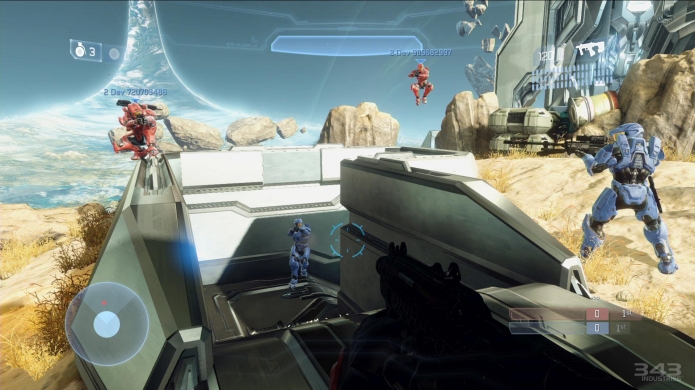 Despite an unhealthy smattering of technical concerns, Halo: The Master Chief Collection really is an essential purchase for fans of the series, whether they’re in it for the campaigns, the multiplayer, or the best of both worlds. If you’re new to the series and curious, this is the way to play Halo. With over 45 campaign missions, more than 100 multiplayer maps, access to the Ridley Scott-produced Nightfall series, and the Spartan Ops challenge missions set to drop next month, this is a comprehensive Halo offering that more than justifies the price of admission. The concerns of the original versions of the games persist (reviews for Halo: Combat Evolved Anniversary here and Halo 4 here), but they’re not enough to hold back the potent promise of what Halo: The Master Chief Collection has to offer.