Remember trouncing through Halo's 1, 2 and 3 with various AI buddies coming in at different intervals to help you through tough bottlenecks? Do you also remember, for the most part (especially on Legendary), they died reasonably quickly giving you pretty much no reason to ever become attached to them? Well, in Halo 3: ODST, you're one of those guys who gets killed a lot while the Master Chief wins fame and glory - the forgotten soldier who cropped up to help for a few minutes, like so many nameless Star Trek ensigns sitting in that revolving chair at the Enterprise's helm, sent to the after life without a single line of dialogue.

ODST is an odd beast. It's very much a Halo experience with Bungie's trademark bottleneck and tough-as-nails AI system, only you're not really equipped to handle them. Playing through the game on Legendary is the best figurative example of smashing your head against a brick wall because where the Chief had replenishable shields and was damn tough, the ODST troopers you play through are merely human, and as a result the very strong and overpowering Covenant, alongside your spastic AI team-mates, do a really good job of making a mess of you.

Yes, Halo 3: ODST is a challenging game, but not for the same reasons any of the other titles were. Here there's a serious point of ill-balance, and while Bungie have done an admirable job attempting to break their own formula and craft a different kind of pacing and narrative, all they've actually managed to do is give you two halves of lesser experiences coupled together in an awkward gameplay marriage. 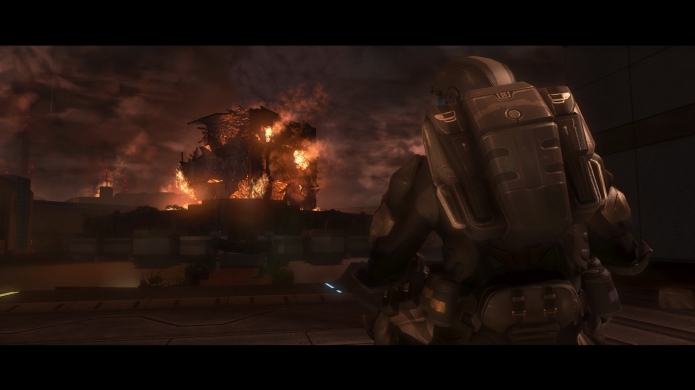 For the uninitiated, Halo 3: ODST started its life as an announced expansion to Halo 3, but quickly found its footing as something of a stand-alone game. There's plenty of meat here in the narrative department, and the opportunities on-hand are plentiful on paper. You play an Orbital Drop Shock Trooper - a soldier dropped onto the battlefield that is New Mombasa, to ward off the invading Covenant. However, you awake some six hours after your initial drop, stuck in your drop pod high above the ground. There's no sign or contact with the rest of your team, and so once you get out of your nest, you're tasked with attempting to find them while piecing together the events of the last six hours. This is done by traversing the open city of New Mombasa to find various beacons strewn about the place, each of which not only clues you in on what happened to your squad, but also offers up the opportunity for you, the player, to play through their individual events.

The idea is fresh, but ends up crafting too much of a gameplay juxtaposition with the throwback sections being linear and pinpoint while the open investigation sequences are often arbitrarily large in size; offering only checkpoints of Covenant to engage or avoid, with no real gameplay incentive presented beyond moving from point A to B. This juxtaposition comes in the form of usually having to clear the badguys out of the way when you're playing as a squad-member with team-mates around, restarting at checkpoints and hoping the next attempt will gel with your comrades and you'll make it through, while out on your own, you can stick to the shadows (it's dark) and run from the enemy - usually the smartest choice - making things just not as organic or consistent as they should be.

What's more is, when you finish the game, there's no ultimate closure as The Rookie. For all intents and purposes he's still out in the pitch black New Mombasa, surrounded by the overpowering Covenant forces who've decimated the place. In this way the game actually only feels half finished, or was simply too short in flashback form, leaving Bungie the task to flesh it out some way, perhaps with an interactive and expansive hub. 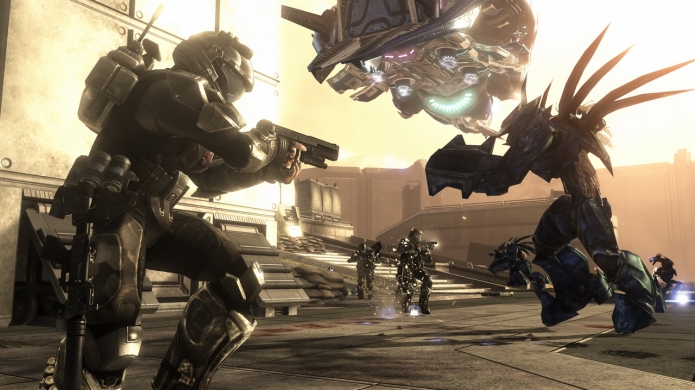 The issue here though, is during the flashback sequences, it's easy to see why this series is still at the fore of the console FPS experience thanks largely to the epic moments of battle and conflict. Fending off Banshees with a sniper rifle and a team of squad mates by your side; Covenant and machine falling in spectacular messes of explosive human victory, only solidifying the reason you're dealing with the more frustrating bottlenecks and just out-of-the-way Checkpoints. Speaking of which, one major gripe I found with the game was in its save system. You're forced to manually save, so seeing that all important "Checkpoint Reached" message does not mean the game will remember where you are when you leave to the Xbox 360 Dashboard, which after my first visit with the game (where I'd played through an hour or so as The Rookie and even more so during one of the flashback sequences, only to leave and come back and be forced to start much, much earlier than where I thought I was) left me pretty pissed.

Pacing through the flashbacks is actually pretty good, and you'll find yourself partaking in the best the Halo experience has to offer: frenetic Warthog driving, Sniping, Banshee flying, Tank driving and more. It plays out like an anthology of the best gameplay moments the last three games have combined, and they're bloody good, even sans Master Chief.

But the real issue still comes in these moments being so high-octane that coming back down to grounded Earth (in New Mombasa) leaves you mildly disoriented. There's a serious lack of direction barring finding the next beacon, and again, because of this The Rookie hub level is nothing more than an arbitrary exercise. You can find various weapon caches and here and there you will discover a series of messages stored in the city's AI's databanks (its name is Superintendent), which attempt to flesh out the game's story, but storytelling has never been Bungie's strongest point, and a lot of the scripting here is pretty lame, even with having Firefly's Nathan Fillion on board alongside Tricia Helfer, Adam Baldwin and voice-actor extraordinaire, Nolan North, the game's story struggles to engage. 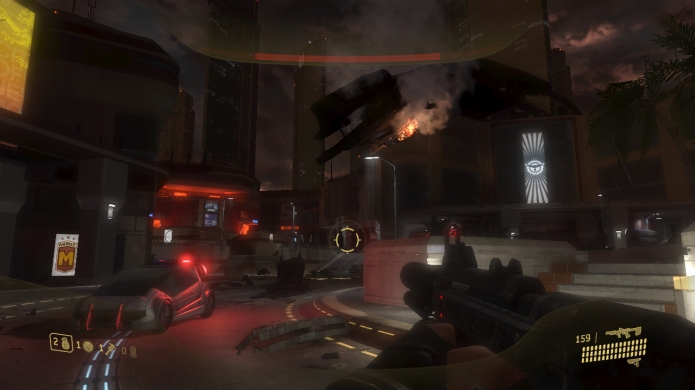 On a reasonable difficulty setting, you can make your way through the game in five or so hours, but thankfully there is an all-new multiplayer option packed in called Firefight. This is essentially the same as Gears of War 2's Horde mode, where you're tasked with fending off wave after wave of Covenant in levels pulled directly from flashback sequences in the main game. There's value here, but ultimately it's not nearly as engaging as Halo's other multiplayer options, which thankfully find their way tacked onto this release (including all of the DLC map packs), but with nothing new beyond the Firefight mode.

It's also becoming clear the game's visuals just aren't keeping up with the quality of other Triple A titles appearing on next-gen consoles, and given the Halo series is Microsoft's flagship franchise, it's beginning to reflect poorly. It's not that I'm a visuals whore, because gameplay counts for so much more, but the graphics engine Bungie are using just doesn't cut it by today's standards (not that Halo has ever really been a graphics benchmark).

Aurally, on the other hand, ODST is a mixed bag, but really bold in this way. While the Rookie moments are clearly not my favourite, the music that accompanies each visit to darkened New Mombasa is excellent, mixing an eclectic blend of jazz and atmosphere in an attempt to relay the "mystery theatre" spin on the hub sections of the game. It also works alongside the usual Halo music, which we've all come to know as a great soundtrack, and one of the series' stand-out features, and in ODST this rings true once again. 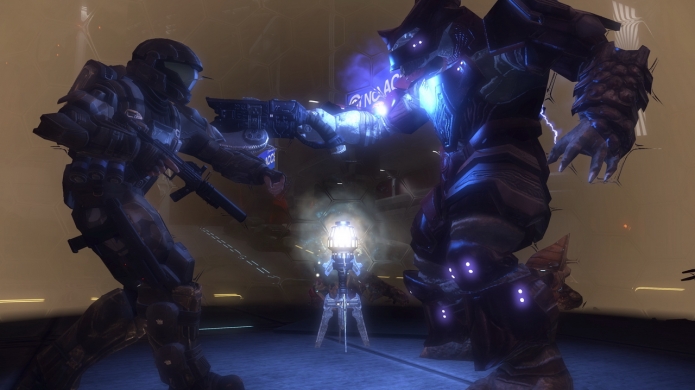 Ultimately though, Halo 3: ODST is too little in its dual parts to offer a solid experience. There are awesome moments riddled throughout, but these come at the price of dealing with annoyingly frustrating bottlenecks as well as misplaced deviations in gameplay. The Rookie quest is an interesting idea, but barely has enough to carry itself as a stand-alone and enjoyable concept, relating poorly to gameplay, leaving it more as a chore to get behind his VISR than an enjoyable break from the chaos that is staple Halo gameplay injected into the flashback sequences. Halo fans will likely eat this up, but if you've had your fill of Covenant and faceless human heroes, you're honestly not going to miss much by missing this.

For more screens and info, be sure to check out our Halo 3: ODST game page right here on AusGamers.