Death and repetition form the basis of the rogue-lite, where going through the same locations to try and get a little further is often hindered by your own skill and that of your character. Where falling only to get up again is baked into the design, with the number of times that might happen being indeterminate.

There’s a very classical videogame feel to the idea of death and repetition, the need to overcome a challenge, an obstacle, to reach some conclusion. Whether that be a flag to signify the end of a stage or a congratulations screen offering up some high-score kudos. As seen in Rogue Legacy, Dead Cells, and now Hades, it’s the combination of your own skill and the mastering of mechanics that runs in parallel with character progression - the levelling up of things like overall health and power. 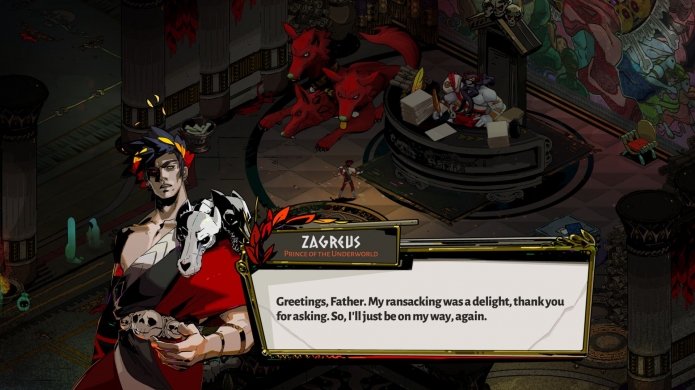 It’s interactive magic when it all works together, when your progress exceeds that of your own expectation. Surprise and variety mean no two attempts are ever the same, and for that alone Hades is immediately intoxicating.

There’s a very classical videogame feel to the idea of death and repetition, the need to overcome a challenge, an obstacle, to reach some conclusion.


From indie studio Supergiant Games, Hades sits comfortably alongside some of the best examples of this particular style of game - the aforementioned Rogue Legacy and Dead Cells. Let’s get this out of the way early though, it’s a masterpiece. Through setting, story, and world-building it manages to be something of a miracle. A rogue-lite where the world, characters, and stories progress in parallel with your own skill and understanding of the various mythological Titan weapons and abilities of Zagreus, immortal son of Hades, picks up along the way.

With its Greek myth setting the narrative is as key to the experience as the fluid and engaging combat. As integral as the Boon system that lets you create a malleable and intuitive action-RPG build on the fly, throughout the course of each run. Via the helping hand of various Gods each ability, skill, or variation is given personality. Story isn’t often a part of the endless nature of the dungeon crawler, where combat and fast reaction times blend with numbers and abilities and skill combinations. Often the story is just that, your own weapon and build-of-choice, a journey told through critical hits.

What did it take, in terms of tools, to finally cross that finish line. 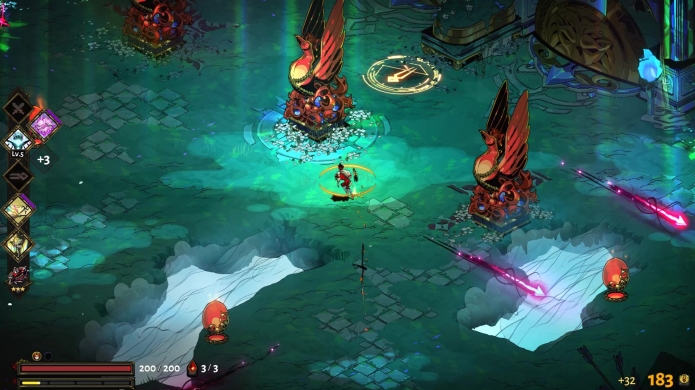 In Hades, taking on the role of Zagreus is at first a mystery - he’s determined to escape the underworld in order to reach Greece and eventually Mount Olympus. Thwarted at every turn by the lord of the underworld, his father, and those that serve him, whilst also being helped by Gods like Zeus and Ares and Athena, relationships, rivalries, love, hope, regret, pettiness, and other aspects of the human condition play out in a long-form tragedy worthy of the inspiration and source.

Make no mistake about it, in terms of presenting Greek myth in a videogame - Hades ranks as one of the best, if not the best adaptation to date. It nails the tone, the playful, vindictive, erratic behaviours of the Gods - most of which are bored and more than happy to meddle in the affairs of others. It’s also funny in a way these stories should be. Hades is also modern, and dripping in its own distinct personality - a far cry from the sword and sandals and snake-hair approach one might associate with these characters.

Broken down to its core though - the escape as the driver is brilliant. Zagreus’s “death” leads to him emerging from a pool of blood at the House of Hades after each failure, only to dust off some ethereal dust and try again. There he can speak with various characters, from lost souls to demons, some of whom may in-fact work against his progress, and learn more about the underworld, its history, and what might have caused the paternal rift that kicks off the action. The story here is classical to a fault, but in slowly unravelling new beats and surprises as it unfolds, there’s depth on par with both the greatest action-RPGs and the works of Homer. Wonderful writing and an art style that is truly gorgeous bring it all together. 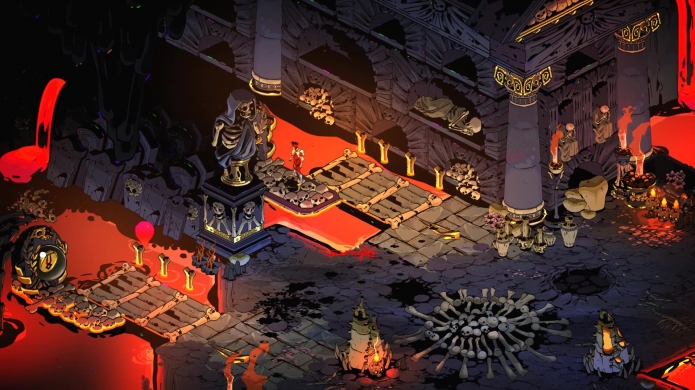 The miracle or genius isn’t that Hades tells a wonderfully realised story that unfolds over several hours, it’s that it does so alongside the depth and breadth of its mechanics, combat, and fluid movement. Where, to borrow a classic phrase, often the twain shall meet.

The miracle or genius isn’t that Hades tells a wonderfully realised story that unfolds over several hours, it’s that it does so alongside the depth and breadth of its mechanics, combat, and fluid movement.


The most obvious example being tying Boons, which can be skill or weapon modifiers as simple as adding some lighting to a primary attack or critical hit chance to a special ability, to the various Gods. That lightning example is of course tied to Zeus, where you might begin a run, chat to the ol’ God of Thunder, and choose from various lightning or shock-related abilities to inform a build or playstyle. In keeping with the stunning art-style and the clean isometric presentation combat and movement and animation across Zagreus and enemies is pixel perfect.

As an avid fan of Diablo III’s transition into a build-your-own action-RPG superhero, Hades is often reminiscent of that Blizzard classic at its best - where weapon choice can then inform skills, variations, and switching things up based on what you’re presented with. There’s so much surprise in store and the narrative and mechanics are so intertwined that to discuss it in detail feels like spoiling the experience. In the end, persistence is what drives it all. So much so that reaching the surface and overcoming that final obstacle presents a feeling so monumental, that it borders on deeply emotional. But like any Greek tragedy or work of classical fiction that too opens the door to more questions, more answers, and more challenges for you and Zagreus to tackle head-on - with a little help from the Gods.
Follow Us
Latest Reviews
More...
News Feed
Advertisement
Latest Threads
Log In
Create Account | Lost your password?