The beauty of Gravity Rush is that it did not choose to fly. Given a “fly” button, the player would easily be able to intuit what is required in an open-world city. The thrill would initially be high as you soar above buildings and rush back towards the ground, but would lessen over time, as flying is easily understood from a mechanical and experiential standpoint.

In Gravity Rush, you do not fly but fall. Whilst falling is still within the realms of common experience (this writer is yet to skydive, but some of you likely have), we are all locked into an inward gravitational direction, with no recourse to protest against that ever present force in our lives. Gravity Rush provides exactly what its name suggests via gravity shifting, a concept at once alien yet empowering, and certainly far more interesting than any bird-man (or woman) aspirations.

Controlling how you fall encompasses much of the experience, with several extra flourishes to this initial mechanic that will keep you glued to your Vita far beyond any agreed understanding of “portable system”. Gravity Rush is of a quality that would easily exist on a home-console, requiring focused sit-down play-time, and offers the best glimpse into a bright future for this impressive system. 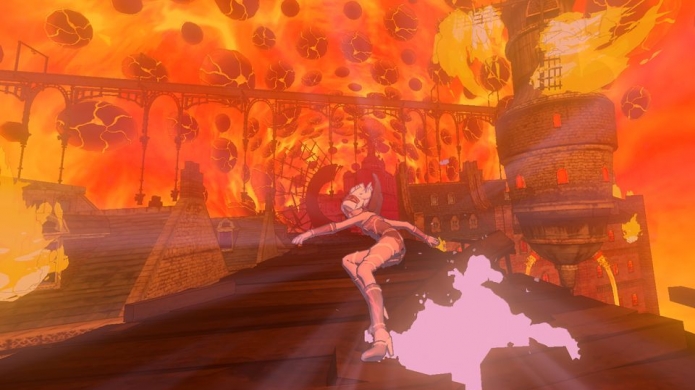 You play as Kat, a red-eyed amnesiac suffering in the self-confidence department. Waking up in a strange world, where dark red gravity storms ravage the floating city of Hekseville, Kat’s only companion is a magical cat that seems to have endowed her with gravity-shifting powers. At first these are limited, but after a few hours a full range of neat gravity-related moves are unlocked, making the game’s combat much more engaging. Shifting gravity is as easy as hitting the right bumper, which puts Kat in a floating stasis bubble. You then aim the centre reticle, either with the right thumbstick or by tilting the unit (the tilt option seems cool initially, but becomes difficult to use during more hectic sequences) and then press the right bumper again in order to “fall” in the desired direction.

If Kat touches a surface while falling, then where her feet land immediately turns into “down”, effectively turning the entire world upside down, sideways and everything in between. The small city is thus opened up via hidden gems (which you spend on upgrades) underneath bridges, along walls and atop roofs. The only limit to this power is a gravity meter, which grows in potency via upgrades as you play. Imagine Grand Theft Auto where instead of having to drive through the city to an objective you could simple shift gravity and fly hundreds of metres into the air, before hovering and shooting off in the direction of a navigation point. Gravity Shift is much tighter in focus than GTA – the city is smaller and only main quests and challenge missions are available – but the feeling of freedom it gives is no less exhilarating.

Kat’s abilities are added to as you play through the main missions, including a fully-fledged upgrade system for health, gravity time, shifting speed and so on (via the collection of said gems) – all of which are used to fight the game’s amorphous enemies. These dark blobs, physical manifestations of the dark energy attacking the world, take the shape of tentacled troops, flower-shaped growths and snail-like beasts. The former are easy to tackle via Kat’s floating kick, which is implemented by aiming at an enemy’s red-orb soft spot and pressing Square to fly through the air and smash them apart. Enemies with shelled armour require more hits, but can be softened up if you have a special move saved up, such as a whirlwind attack or a heat-seeking, auto-pilot gravity strike. 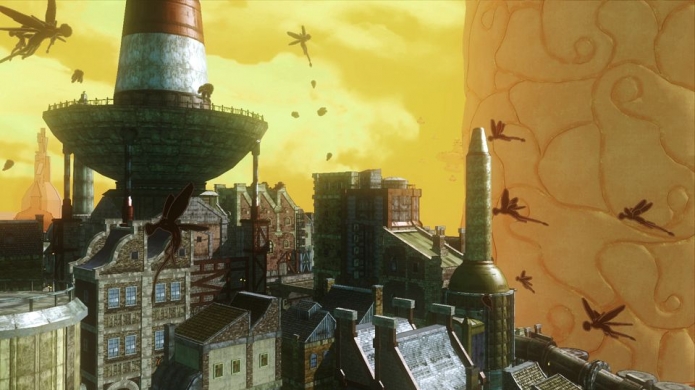 Missions are structured so that you complete two or three normal tasks before taking on a boss, all of which are quite fun encounters. The spider-esque boss that scurries about the city as you chase it is particularly memorable, even if the combat itself can be irksome. Due to the gravity shifting nature of flitting about and attacking monsters, combat does get confusing and frustrating at times, but there are never so many foes that you can’t simply hit the left bumper to normalise gravity and seek out some green health pickups. Most annoying is the small active sphere that missions give you. This limits how far from the action you are allowed to wander, with the game disintegrating Kat automatically and resetting her back near the action should you decide to stray too far from the directed path.

The art style of Gravity Rush is its stand out feature, making the game a true pleasure to behold. It’s simply gorgeous, employing an approach influenced heavily by Bande Dessinee, an art style popularised for Franco-Belgian audiences. It’s not quite cel-shading and not quite cartoon. Action is heavily punctuated by movement lines and other artistic flourishes, with the foreground action always completely penciled, coloured and animated. The further away objects and people are, the less defined they are, so that distant buildings fade into sketched outlines and animated citizens look like the background elements of a cartoon, muted versions of their closer analogues.

Gravity Rush is a stand out title for the Vita. It usitlises all of the handheld’s features, presenting a unified experience that draws you into both the game world and that of the Vita’s abilities. Swiping, tilting and touching your way through this gorgeous world (the story scenes in particular showcase physical awareness and interactivity) is pleasurable and deep in a way that will easily draw you away from your main home console(s). This is the kind of game that needs to exist on the Vita, to direct it in this early phase from being a home for only portable versions of extant titles to one that can stand alone proudly.
Follow Us
Latest Reviews
More...
News Feed
Advertisement
Latest Threads
Log In
Create Account | Lost your password?