In my Grand Theft Auto V review for PS3 and Xbox 360, I lamented a handful of minor things including the game’s sometimes lower-end textures and minute moments of pop-up. It was hardly game-breaking and certainly never took anything away from the experience, but it was noticeable nonetheless.

Welcome to next-gen Los Santos then, a highly-detailed and texture-rich update to the place we visited before, also now brimming with more life and more things to do, resulting in more options for fun and chaos.

I’ll get to the skinny, because that’s all you want and need to know. If you’re after a detail-heavy review on the base-game, here’s my original 9.8/10 write-up. For full transparency, and so you don’t need to go to the bottom of the page, the new content, updated visuals, enhanced life and first-person mode is worth more than .2, but there’s nowhere else to go, so the next-gen (and eventual PC) version of Grand Theft Auto V is a 10/10 game. The second 10 I’ve delivered this year and only the fourth in my career.

It’s hard not to go that high though. This updated version of GTA V -- the most successful entry in the series and one of the most successful videogames of all time -- is not just a res’d up port. There’s care, love and forethought thrown into the game, like it was being developed for the new machines all along. No stone is left unturned, and you can cite all the marketing bullet-points you like, such as an expanded 30-players online, returning player rewards, all previously-released content retail packaged in, those updated visuals and more, but it’s the coalescence of these things as a whole that flesh out what is easily one of the best experiences you’ll have in a game in 2014.

The base stuff remains the same. You’ll play through the story and all that has to offer, with dynamic options along the way, as you did before. Obviously if you’re a returning player you can make different decisions to the ones you may have before for a different outcome, but the truth is there’s nothing overly new from a campaign sense. Oh, wait there is -- you can play the damn thing in first-person now, which fundamentally changes the game, and in many cases for the better.

The unique nature of this idea is that the last GTA outing (and Red Dead Redemption), along with GTA V, featured Euphoria skeletal physics for characters and animals. Movement is a tad slow, but more realistic than canned animations, because momentum and terrain affect your body’s physical motion. This is why missions with players hanging onto moving objects, with one hand or whatever, are so much fun in this series, but in first-person the game feels even more realistic to a point that it’s thoroughly in your face, in a good way. You might discover that some sequences clearly haven’t been designed to deal with your being able to get your face right up in the game’s grill (the drunken Freaks and Strangers mission Trevor performs early on is a great example of this), but these minor sequences are few and far between and usually offer a bit of hilarity anyway.

The first-person viewpoint isn’t a tacked-on system, either. It’s a fully customisable option designed to give you the ultimate GTA V experience, as you’d prefer it. You can even set the game to play in third-person while you’re on-foot, and flick to first-person when you enter a vehicle. And that’s just one example. It also doesn’t feel like a floaty shooter. Movement is defined by your actions and the first-person sensation is reflected in this. You’re also not always walking around poking a gun in the face of everyone you see, which is a weird twist for such a twisted game like GTA, but the majority of the time you’re just looking at your hands or feet. Oh, but be warned, melee combat in first-person, with the foot stomp is… well it’s brutal.

The game’s already rich world, as I’ve touched on a bit already, is now bolstered with more life and variety. Early on I parked a car I’d stolen as Franklin outside Michael’s house. Hours later (like, three or four) the car was still there. I’d never seen any consistency like that in the previous build before, and it’s just one example of what the new power in the new machines offered the team. Cars are no longer repeated based on the one you’re in, and the game’s wildlife, peds and foliage is upped to the nines. It’s just so densely layered it’s hard to put a single finger on any one thing that stands out this time around (though if I had to, I’d put it on water. Fuck it’s gorgeous to look at, ride on and swim in). 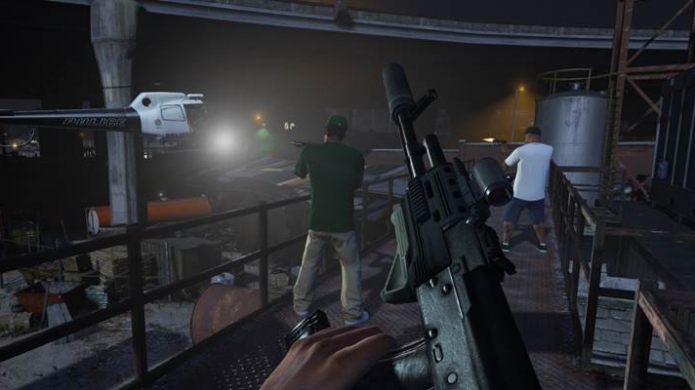 And let’s not forget that the PC version isn’t even here yet. We may have to raise our scoring system to 11 for that one, but at its most base level, GTA V is a long and inviting investment of fun and engagement, but with everything else now added in the updated versions, it’s like they finally put a ring on it. If we’re to use that metaphor, consider the first release as a dating partner and GTA V next-gen as our newly minted engagement. Maybe the PC version is wedding bells then? Either way, you’re stuck with this bad-boy for life -- for good and for bad, for better or worse, except there really is none of that, sticking it out with Rockstar’s magnum opus is more akin to a lifetime of fun -- the perfect partner who gives in double what it takes, and all it takes is your time -- time well spent, in my opinion. One of the year’s gaming’s best and not to be missed.