It seems like every year a massive confrontation kicks off as sports simulation developers face-off and throw down. Whether it’s soccer, basketball or even Mixed Martial Arts you can rest assured that any publisher worth their salt will be putting their best foot forward trying to wow you with spiffy new features and make a grab for your gaming dollar. EA Sports has pretty much cornered the market on golf, NFL and Nascar (shudder) and nobody wants to try to get a piece of Fight Night’s action.

The only thing really missing from its portfolio is tennis and it has firmly set its sights on 2K’s Top Spin crown to try to get some of that Grand Slam action. With the Grand Slam Tennis franchise entering the fray by adding a ”2” to the title and transitioning over from its previous home on the Wii does it have the power to smash a topspin finisher down the line (bazinga!), or is it more of a soft volley into the net? It’s a little bit of both, actually.

On paper it has a lot going for it. It’s the only tennis sim to feature all four Grand Slam tournaments and they’ve enlisted tennis legends Pat Cash and John McEnroe to handle the commentating duties with McEnroe doubling down as your trainer as well (who can be equal parts entertaining or frustrating depending on your mindset and sense of humour). There are three different control schemes with your stock standard controller focusing on face buttons, the new Total Racquet Control utilising the thumbsticks and it also supports PlayStation Move functionality.

All three control variations have their pros and cons with the stock standard controller the safest option allowing you to easily direct your shots while maintaining constant power, or opting for topspin and slices. The Total Racquet Control is a bit of a hybrid of the well-known analog functionality of the Fight Night franchise and Rockstar’s Table Tennis offering and much like the latter, can get tremendously addictive once you start feeling the flow, though at times it’s a tad imprecise.

The Move controller feels more like a stab at the motion control Nintendo crowd and while it does favour the more casual gamer you’ve got to give kudos to EA Canada for managing to map everything onto a single controller (sans navigator) without losing much in the process. The toing and frying over the net is bolstered by objectives and milestones set for each match, tournament and the game as a whole (such as hitting three overhand smashes in a single match) bringing with it an element of strategy if you want to gain some extra in game currency and buy that sexy new racquet from the Pro Store. So far so good right?

The problems lie in unchallenging gameplay with some ESPN Grand Slam Classic matches - where you replay pivotal moments in tennis history – the only exception at times. You’ll often breeze through entire seasons of your career barely breaking a sweat, unless you’re overcompensating with the Move controller. The graphics are extremely average and entirely forgettable and while the commentary provided by Cash and McEnroe can be telling at times by midway through the first season you’ll have heard just about everything they’ve got to say at least a dozen or more times. Occasionally swings don’t even register or your player simply wont respond to direction moving after the fact, which can be frustrating at crucial moments. 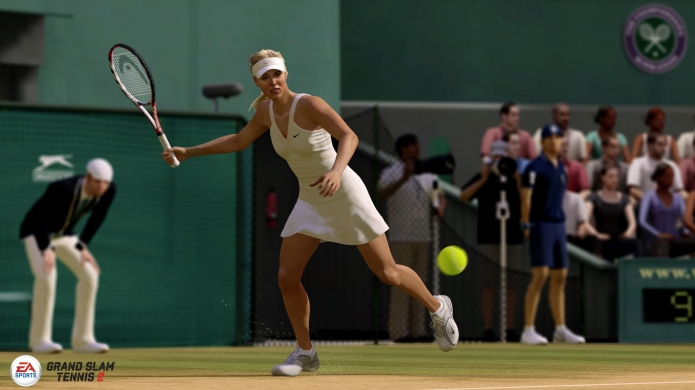 If you’re looking for some light-hearted swing and miss fun with your mates then this is certainly worth a look, particularly if you’ve got a couple of PlayStation Move controllers lying beside your couch, but if you’re looking for the definitive tennis experience Grand Slam Tennis 2 is lacking compared to other more established offerings.
Latest Comments
Link