God of War fans and creators -- I owe you an apology. God of War fans, you owe Nintendo (and Vigil Games) a massive thank you. Santa Monica Studios, we all owe you a debt of gratitude. Kratos, you be angry you, Boo.

So, I’m not going to mince words. The PS4’s new God of War is Metroid Prime and the Darksiders series, starring Kratos and his son. (We might also need to thank From Software and Dark Souls in here somewhere, but I dropped the difficulty level anyway so that didn’t affect me as much.)

Pacing and story, however, are what separate this design throwback to the aforementioned and it’s where the game shines. It’s interesting, though, because the game’s story is mostly laid out in set-piece design. Which is fine. These guys know how to do ‘giant’ set-pieces. They’re not afraid to pull the player out of a basic gameplay loop to give them the most over-the-top shit they can. And that’s God of War.

There was also a promised thread of this being a father and son story, where one learns off the other, in absolute antithesis to how any other God of War game has come before. And like most, I was trepidatious about this; hell, I was even trepidatious about the inclusion of Atreus at all. As well as most other components of this new GoW makeup, but as I mentioned earlier -- I was wrong.

It does take a while, and the player-expected suspension of disbelief is wafer-thin early on, but that’s because we’d thought we’d been here before. We thought we knew everything. But, like Kratos being in a new land, we thought wrong. Yes, this could have been a brand new IP and initially it seemed like a cheap marketing tactic to just tack on Kratos and the God of War name here, to sell a new setting and a new game-design tentpole. But really, the only thing the marketing peeps at Sony or Santa Monica Studios got wrong was just calling the game God of War. Surely even “God of War: Father and Son” would have been better. But I digress.

What makes this entry in the series so fantastic; so amazing is that Santa Monica Studios is patient. And let’s consider this for a minute. God of War II began with a fight against the Colossus of Rhodes. God of War III began with Kratos and the Titans storming Mount Olympus. A brake pedal is not something the studio is known for, but in this latest Norse entry we see a measured and even somewhat broken Kratos. He barely has a relationship with his son, and their loss sets itself up as a binding moment. It becomes a tangible in-game storytelling tool not tied specifically to numerical values. The promised relationship between the two is the driving force of the game -- but this also takes a long time to establish itself. Patience, apparently, is key to parenting and learning. 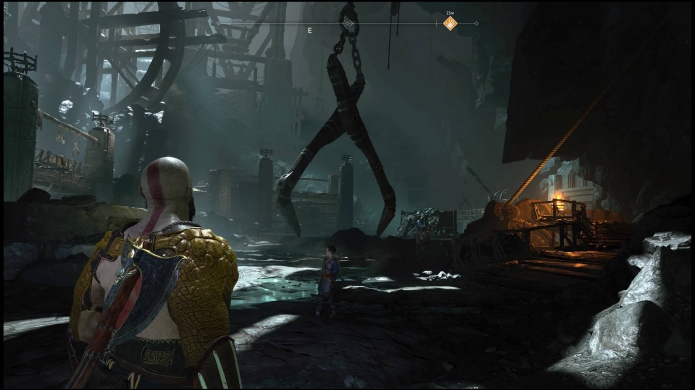 But before we deep-dive on all of that, here’s the game’s makeup. This is a gated sandbox game-world. Kratos and Atreus are lead down varying paths in heavily designed areas. You’ll find ‘off-the-beaten-track’ goodies to discover, depending on your curiosity level, while puzzles form an equal part of the gameplay against combat. Loot collection and a lite-on RPG system accompanies all of this, while Metroid-style level design here is key. The “gated” reference above suggests, as you’d expect, a progression system to reach areas you couldn’t earlier. Boss battles exist. Tight, rewarding and -- if you please -- super-challenging combat, is always available. And these are equally measured against the game’s level design and how players choose to explore their environment.

Story isn’t always front and centre, either. Once you make it to the Lake of the Nine and you realise that you can *kind of* tackle the game any way you see fit. Everything generally opens up -- though it’s still heavily gated early on.

You’ll meet some friendly faces, but I’m saving a rant for a lost opportunity here for my review conclusion. Mostly, there are two blacksmith brothers who help you out and ‘magically’ appear at various points throughout your journey. This is important, because you do need to upgrade and build yourself and your son out. This is where the RPG-lite stuff comes in, but it is important. You can go really deep in on it if you want to, or you can kind of tiptoe through it as well. It’s not the bulk of the game, but it’s important to the game if you want to conquer all that’s on offer.

So story beats come in dribs and drabs, but you can still learn about the game-world through a number of lore discovery options. Moreover, Atreus offers insightful or cryptic bits of information about the place they’re in, and for those wondering -- yes, the Norse world knows who Kratos is and no they’re not happy about him being here. But that’s all I’ll give you, save for saying his place here is the same as ours -- we know little about it, how it functions or even what it all means. And just why they’re even angry about it. Ooooh, the drama.

Arguably the game’s strongest component though, is the relationship between Kratos and his son, Atreus. It’s hard to measure, because it’s kind of seamless. And as a father myself, I found myself getting a bit deep on it all. Their journey isn’t one of revenge or conquering; it’s humble and beautiful. It’s about honouring the woman they both loved in unique and amazing ways. Their initial barrier eventually wanes, but not through a player-specific way. It’s just gradual. They’re on an adventure together, and the reflective changes in Atreus’ character towards his father and the world around him are awesome. As this happens, new combat buffs for him open up based on his growth in confidence, but it’s not at all binary. This is storytelling in games we barely ever see, and it’s incredibly well-handled. Even their basic area-to-area banter is next-level.

Conversely, its weakest component is in its lack of life, beyond a handful of story-specific characters. There’s reason for this, but it would have been good to have friendly places to visit with more exposition, given the story beats are few and far between. Combat here is amazing, but it’s not always the thing you want to be doing. And the remnants of other races and characters to talk to and engage with are everywhere. It’s largely the game’s only major downfall, but one I did sorely miss throughout the experience. Especially when evidence of once bustling life is everywhere to be seen. But that’s maybe just me.

I was always a critic of a Greek god being in an entirely different realm with different rules. I thought for sure the game was just using Kratos and the God of War IP to get it over the marketing line, but I’ve been proven massively wrong. This is a God of War game, and it’s fucking brilliant. It has old-school game-design coupled lovingly alongside a modern storytelling tilt, and it marries the two in a contemporary and meaningful way. And playing on PS4 Pro on a setup like my Samsung QLED 65” Q8C with HDR, it just screams quality.