They say Hell hath no fury like a woman scorned. In God of War: Ascension, a prequel to the events which transpire in the rest of the franchise, the angriest man in gaming Kratos gets a triple shot of pain from the three Furies. You see he’s made a blood oath to the gods and anyone trying to escape their fate calls down the furious fury of the Furies as these three goddesses deal out what they see as righteous retribution. I guess Kratos has no Hell like three Furies scorned, and man oh man are they going to try to make him pay.

Since this entire plotline occurs before Kratos become Ares’ play toy to usurp Olympus you see a more brooding less hate-filled version of the destroyer. This prequel deals with his remorse over the loss of his family. He is a man seeking the truth in a world tormenting him with illusions, the Furies’ specialty. While I dug the change in direction, the story just wasn’t all that engaging and the anger managing Kratos comes off as extremely forgettable and, well, I’m sad to say bland. 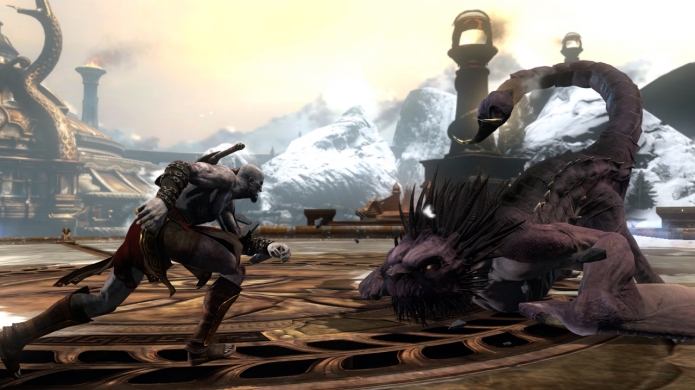 Luckily, God of War has always been about ridiculous set-pieces, massive monolithic monstrosities and entrail spilling combat and it does deliver, mostly. Your Blades of Chaos remain your go to weapon, but rather than pick up a new slew of alternatives, the blades have been imbued with elemental abilities attributed to the gods with fire for Ares, lightning for Zeus, ice for Poseidon and soul damage for Hades. Each of these has an unlockable magical super move as well and they are pretty spectacular.

You can also pick up secondary weapons dropped by defeated enemies, which is a neat twist and some of the quick time finishing moves have been replaced by a dodging mini-game which adds another cool dimension to the stabtastic Kratos’ repertoire. The problem is that the flow seems a little stunted. It wasn’t until about a third of the way through that I finally began to feel a rhythm to the combat. It lacks the fluidity seen in the previous iterations.

The puzzle elements are still satisfying though the platforming and particularly the swinging sections were either too long or hard to judge thanks to a sweeping cinematic camera making your end point difficult to judge. In fact while I usually give points for the way the camera follows the action, in God of War: Ascension it made some sections increasingly difficult with very little payoff. Couple this with some truly perplexing respawing enemy points, where an endless array kept on coming and coming and coming ad nauseum and it hammered home that this little Greek adventure just wasn’t in the godlike realm of its predecessors.

Two shining lights were the Amulet of Uroborus and the Oath Stone of Orkos. You can use the Amulet of Uroborus in combat to slow enemies on the spot or, in puzzles to heal or decay specific sections of your environment. It adds a cool time-displacing element to puzzles as it’s not always merely a matter of rebuilding a crumbling causeway or decaying a chain to clear your path. A touch of lateral thinking will often get you through. 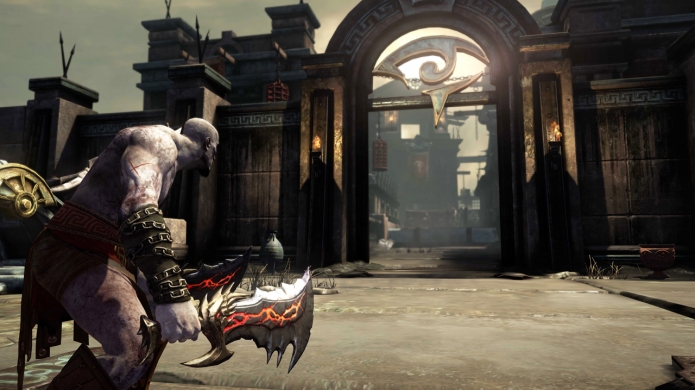 The Oath Stone of Orkos quickly became one of my favourite additions to the franchise. This puppy allows you to create a doppel-Kratos to hold gears in check for the more puzzle centric aspects, but calling him up when you’re laying a beat down never ever gets old. As he manifests he starts laying a ground stomp on literally bashing everything into oblivion. He was a handy little helper, though he did glitch out at the worst possible times, particularly in the latter sections when I desperately needed his assistance.

For the most part you’ll find God of War: Ascension challenging but not overwhelming until the final quarter of the game. Let me start by saying fuck you Trials of Archimedes. Up until this point health and magic chests were plentiful and this last series of trials made them feel like a taxi cab, always around when you don’t need them and never there when you do. Previous cheap respawning tactics paled in comparison to this ‘test’.

Without giving away too much, you’ll be beset upon by all manner of beastie in multiple mini-waves in three separate stages. The kicker is that there are no health or magic reprieves other than by defeating enemies by execution style finishers. They double and triple team you and the term rape definitely sprang to mind. Even my little doppelganger Kratos buddy seemed to glitch out frequently throughout this section seemingly standing about waiting for a latte, instead of laying the smack down when I needed him to. 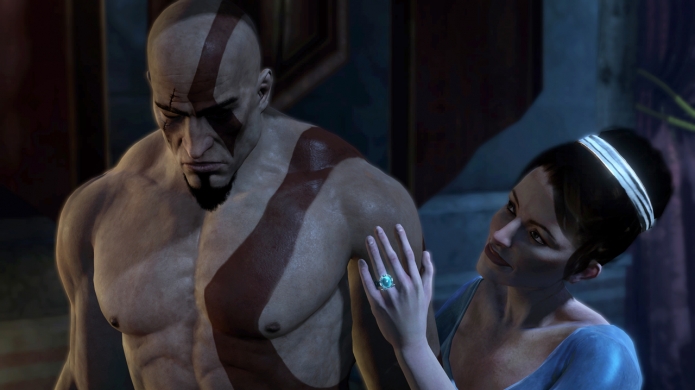 I’m all for having my mettle tested but there’s a difference between challenge and punishment. It just felt unfair. You needed a near flawless first round, which just happens to be by far the toughest and a complete grasp of enemy attack patterns, which elemental damage to pit against each creature and when to strike. Not that difficult, I grant you, but when you’re up against four different adversaries with not much room to maneuver it can certainly try your patience.

I consider myself quite a competent gamer and the hours (yes, hours) it took to complete these trails alone didn’t fill me with a sense of accomplishment, rather frustration and relief once it was over. It was easily the single most difficult sequence in the entire God of War franchise and left a sour taste in my mouth almost tainting the entire experience altogether. I can see this being a tipping point for many gamers and it’s curious why the developers chose such a demanding lead in to the final stages.

Moving away from the single-player campaign, the biggest departure for the franchise is the addition of the multiplayer component. Now I don’t know what other reviewers have been playing or how much time they investing in it, but I don’t see what all the bitching and moaning is about. After knocking out about a half a dozen hours or so, I have to say I had an absolute blast.

Gripes about the modes being nothing new, or fresh players suffering at the hands of the more experienced, are moot as far as I’m concerned. When was the last time Call of Duty truly innovated and mixed up the genre or gave newbies an entry level boost other than bot-match training? The answer to that riddle is never. Welcome to online multiplayer, the games stay the same the skins just change and I don’t have a single problem with that.

You start off as a non-descript warrior and by pledging your allegiance to either Ares, Zeus, Poseidon or Hades you’ll be imbued with various buffs and magic. You can customize your character’s armour and weaponry as you’d expect but you also have several magic abilities to help you out of a fix. I was partial to Hades as the evil horned elements to your armour looks bad-arse and the magic abilities are particularly nasty as you grab your opponent and siphon off their life force or levitate them as spirits of the Underworld feasted on their immobile flesh.

As you level up and use each weapon or piece of armour it increases its potency and depending on the god you favour you’ll also earn new sharp bladed pointy things or clunkier smashy stuff to introduce blunt force trauma to your foes, or sexy new gear to drape around your manly physique. There are also interactive death dealers like flamethrowers or massive crossbows you can man, plenty of environmental hazards such as spikes or bone crunching wheels of death as well as some level specific monsters like a massive Gorgon you can control and get the other team stoned, just be careful of friendly fire. 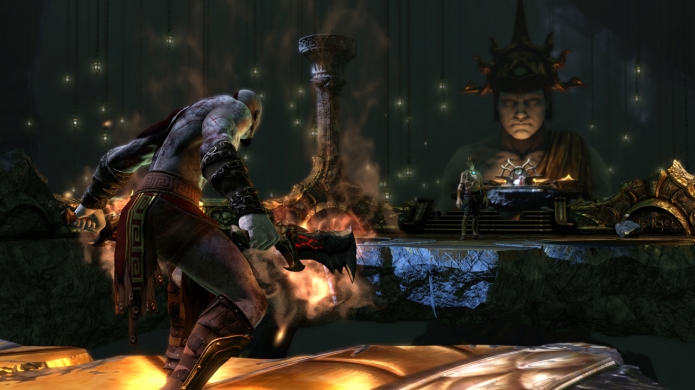 Favour of the Gods is a free-for-all or team based affair where one earns said favour by endething thy enemy’s life or punchising chests. The free-for-all can get extremely chaotic and the team-based four on four seems to be the sweet spot. There’s also a variation on Capture the Flag which is tremendously addictive and in Trial of the Gods has you team up with a hombre or hombrette and run a gauntlet against increasingly difficult waves of mythical creatures against the clock. While I will admit it will take a few hours to level up to find that groove it’s nowhere near as intensive of a learning curve as most FPS multiplayers and I found it an absolute hoot. Ignore the haters and give it a go. What have you got to lose?

God of War: Ascension proved to be a mixed bag of mythological tricks. The single-player wasn’t as strong as I’d hoped it would be with an anger neutered Kratos a little bland. It was all just a little bit off. The revamped combat wasn’t anywhere as smooth as I’d have liked and the difficulty spikes felt incredibly cheap, even for a franchise veteran such as myself. On the flipside, graphically it was astounding, the boss battles were epic and the multiplayer is something I’ll definitely go back to for shits and giggles. I feel quite torn. It isn’t a bad game, not by a long shot, but you’ll feel the main plot is sorely lacking something, which is something I never thought I’d say about God of War.
Latest Comments
Link