Ghost of Tsushima: Legends is a free update coming to the critically acclaimed Ghost of Trushima that brings new co-op content in the form of two-player story missions and four-player survival missions based on Japanese folklore. It arrives October 16 alongside a Version 1.1 update that adds a New Game+ mode in addition to new elaborate outfits and designs.

As per Sony, the Ghost of Tsushima: Legends will be a free download from the PlayStation Store once the 1.1 update arrives. Presenting as mythical stories told by Gyozen the Storyteller players can choose from four classes to tackle the new modes - Samurai, Hunter, Ronin, or Assassin. Which are based on the various styles of play already present in Ghost of Tsushima - from stealth to sword action to picking off enemies from afar with a bow.

Following the launch developer Sucker Punch will also be adding a Raid which is described as "an epic three-part adventure that will require excellent teamwork and communication to overcome". For more info on the 1.1 update and Ghost of Tsushima: Legends - head here.
Tuesday, 18 August 2020
Ghost of Tsushima: Legends is a Free Co-Op Multiplayer Mode Coming Spring 2020
Post by KostaAndreadis @ 01:05pm 18/08/20 | 0 Comments

And it has a very cool supernatural twist that leans heavily into Japanese folk tales and mythology. As per the teaser trailer for Ghost of Tsushima: Legends it takes the beautiful visuals of Ghost of Tsushima (our review here) and injects it with darker red tones and, well, spookier wind.

Just when you thought that Ghost of Tsushima Wind was your ally. Check it out.

Ghost of Tsushima: Legends is an entirely new experience — it’s a separate mode that focuses on four warriors who have been built up as legends in stories told by the people of Tsushima. Ghost of Tsushima’s single-player campaign focuses on an open world and exploring the natural beauty of the island, but Legends is haunting and fantastical, with locations and enemies inspired by Japanese folk tales and mythology and an emphasis on cooperative combat and action.


As per details released so far, there will be four classes to choose from: Samurai, Hunter, Ronin, or Assassin. And each will have their own distinct play-style and abilities, plus awesome armour. For those looking for more story, Legends will offer exactly that in its two-player mode where co-op Story missions will offer increasingly more challenging combat scenarios in addition to new supernatural Oni enemies.

Sucker Punch has outlined a new patch coming later today for Ghost of Tsushima, where in addition to a new Lethal difficulty and a Lower Intensity Combat mode there are also some very welcome text changes coming. For those who grew up watching samurai flicks late at night on SBS, you'll be pleased to know that you can increase the subtitle size by 150% and change the colour to Yellow.

Also, Blue, Red, and Green. Here are the full patch notes - which should also please fans that were expecting a more hard-as-nails Souls-like experience. 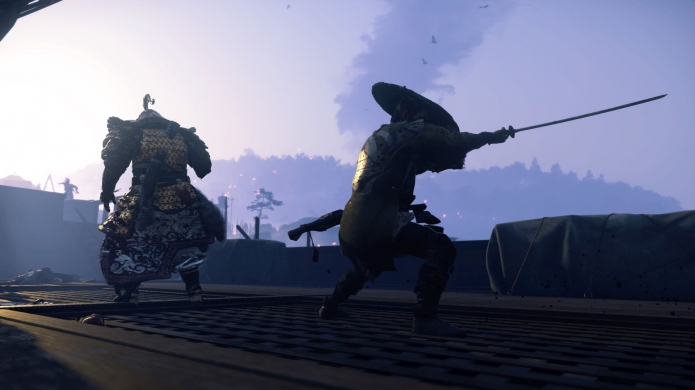 
Patch 1.05 will also include the following new options in the accessibility menu:

Lower intensity mode is meant to maintain the heart and feel of Ghost of Tsushima combat while relaxing several timing-specific elements. Combat is less intense, giving you more time to react. Stealth settings are more forgiving, and enemies take longer to detect you.

Most enemy attacks which are normally unblockable become blockable when Lower Intensity is enabled. Blocking with L1 will keep you safe from more attacks than standard combat, though some attacks must still be dodged.
Enemies break off their attack combos after damaging you, giving you a chance to recover before the next wave of attacks. In addition, your heavy attacks will interrupt attacks from Brutes, giving you another way to stop their combos.
Enemies will not attack you while you’re using Resolve to heal
Enemy awareness builds more slowly, giving you more time to recover after being spotted


Throw in some general bug fixes and this is a great update for what is a great samurai game - our full review here.
Wednesday, 15 July 2020
Assassin Sakai - Ghost of Tsushima Review
Post by KostaAndreadis @ 12:10am 15/07/20 | 0 Comments

The PlayStation 4 is about to get another swan-song in the form of Sucker Punch's Ghost of Tsushima - an open-world samurai epic that in a way answers that call we've all been wanting to hear get answered for a while. Assassin's Creed but Feudal Japan.

A snippet from our in-depth review.

Throughout its lengthy and rewarding narrative there are several cinematic flourishes that call upon the greats from the Samurai genre. Kurosawa, Misumi, and broader cinematic influences present in everything from simple interactions to lighting, shadows and how a character might compose themselves after striking an opponent. It’s also one of those rare breed games that gets better the deeper you go, with an ending that packs an emotional punch. A cinematic end that, as the credits roll, leaves you satisfied. Like warm sake.

The comparison to Ubisoft’s series is unavoidable though, especially if you’ve played the more recent entries into the Animus. In terms of structure and framework, Ghost of Tsushima plays like a variation on a theme. An open-world cover of a song one moment, and at another a completely different piece of music. But with both born from the same instrumentation and chord patterns.


Our Full Ghost of Tsushima Review