Gatling Gears isn’t the most subtle offering on XBLA, but then again, I don’t think it was designed to be. The debut title from Vanguard Games (A new company that includes the team that brought us Greed Corp) Gatling Gears sits you into the capable seat of a very strange looking mech and drops you in the middle of a viscerally intense, steampunk inspired warzone.

After completing a short tutorial that gives you time to adjust to a unique and slightly awkward control scheme, you’re thrown straight into the middle of an ongoing assault that doesn’t stop. Tanks, gunships, bombers and infantry fill the screen with explosions, rockets and mines as you frantically try to move and fire with the dual stick controls.

Vanguard have done a stellar job building a strong and stable graphics engine, which produces a glossy, colourful and rich colour scheme, lush backdrops and great weapon and damage effect. Very few XBLA games look this good, and it’s a credit to the developers that the framerate clicks along at a silky 60fps during the especially crazy moments. 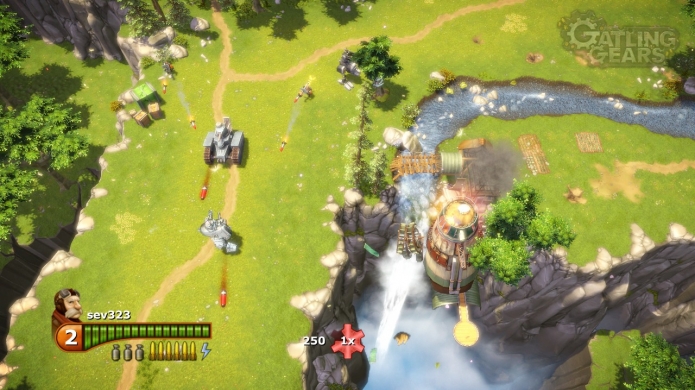 Buildings fall, enormous bosses alongside smaller mobs rise out of the ground or fall from the air, unleashing enormous trails of missile or mortar fire. There is always something on-screen that wants to take you apart, so it’s handy you have some decent firepower available. Alongside the namesake Gatling-gun, you’re also packing rocket and grenade launchers; all of which are upgradable throughout the course of the game.

The game is spread across six pretty lengthy chapters, all of which can be played either solo or with a same-screen or online buddy. Vanguard have to be congratulated for offering both opinions, especially since many titles are sliding into the "online only" basket –- we have extra controllers for a reason! Co-Op is infinitely more fun than playing alone, but Vanguard has made an enormous mistake of not scaling the difficulty to suit multiple players.

The game is just too damn easy. I only died once in the first chapter, which is almost unheard of in shoot-em-ups where bullet spam tends to fill the screen ninety percent of the time. When a fellow reviewer joined me in co-op, the difficulty level dropped even further. We raised the difficulty level but it honestly didn’t seem to make any difference. In every mode, bullets move awfully slowly, upgraded weapons are too powerful and eventually you don’t even need to concentrate to win.

When it comes down to it, Gatling Gears is fun enough, but it’s nothing that hasn’t been done before. It’s obvious that the title wears all inspirations on its sleeve, with obvious nods to classics like Raiden, Commando and other classic top-down shooters. As a result, it suffers from the same problems those games have with repetition and, in later levels, a lack of variety. Eventually you just get sick of shooting the same tanks and infantry with the same weapons in slightly varied environments. 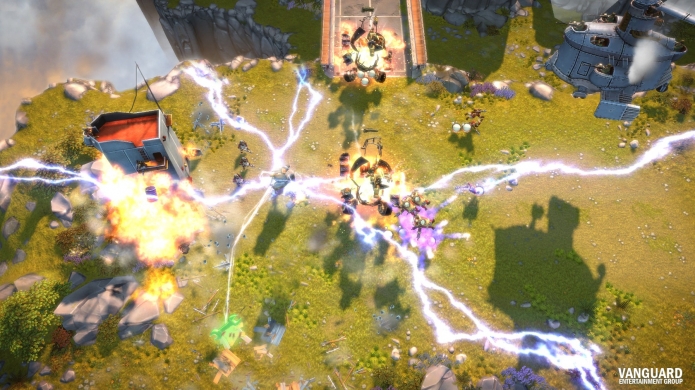 Enemies are hard to see at times, and some of the attacks (particularly bombers) come from outside the screen, so you can be hit without even knowing it. Some system of highlighting enemies or incoming projectiles would go a long way, especially when you have friendly units joining the fray, making things even more convoluted. Lobbing grenades is also something that could use work, as your placement target seems to appear wherever the hell it wants.

But while many of these problems can be fixed, a great game becomes a good game due to its length and lack of innovation. While Gatling Gears certainly looks and plays well, the premise gets old quickly and I found myself having to grind through the later levels for the sake of completing this review. If you’re looking for title to play in short bursts with a mate, it certainly offers a entertaining distraction, but a lack of challenge and variety holds it back from becoming a must buy.
Latest Comments
Link