“… we were lucky enough to use the Turn Ten Forza Motorsport codebase for Horizon so we started with that. Doing that meant the physics system, the way the cars handle and the way they react to the road is exactly the same. It’s so “best in class” that it would have been dumb for us to mess with that.”

These were the words uttered by Horizon’s Design Director Ralph Fulton in an interview last month, so I when I turned the ignition key for my first drive I was expecting full-on, hardcore simulation driving, by console standards at least. When my VW Golf started drifting through the first corner like a souped up Nissan 370Z I wasn’t quite sure what was going on. After taking several more cars for a test drive, and spending almost as much time sideways as forward, it soon became apparent that Mr Fulton has been telling pork pies. While there’s a depth to the handling model that far surpasses the likes of [Need For Speed] Hot Pursuit or Test Drive Unlimited, these cars have been tweaked to deliver a more “exciting” tendency to slip and slide. Provided you find that kind of sloppy handling exciting. Even with all of the cheats – sorry, driving aids – enabled, you’re going to struggle to keep your rear end from losing traction. 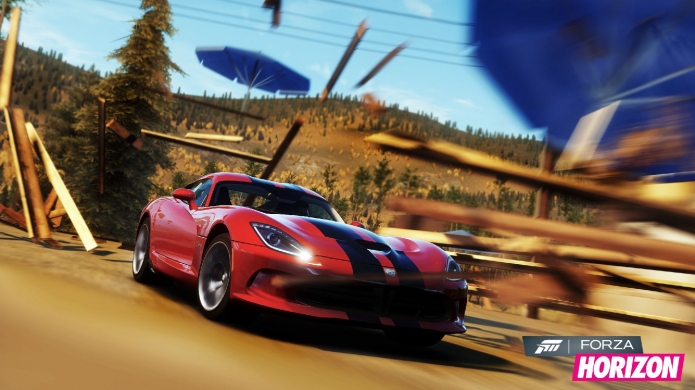 It’s not such a problem when the game lets players explore the huge open map, where hundreds of kilometres of winding roads take them on a tour through vast deserts, scenic mountainsides and rustic country towns. Many of the official races even take place on these roads in point-to-point events, and it’s here that Forza Horizon shines. Blasting down the freeway at 250km/h in a Bugatti EB110 with all 12 cylinders pounding just behind your head, avoiding oncoming traffic by centimetres – these are the moments that make Horizon unlike any other drive. But just as many events head to tight, small circuits, where the narrow barriers on each side of the track make the inevitable sliding a fender-bending affair. There’s no mechanical damage though, with cosmetic dents the only price you’ll pay for driving like a maniac, so wall-riding soon becomes commonplace. With seven other cars filling the track, a clean, contact-free overtake is incredibly hard; it’s much easier to simply bash your way through the other vehicles. And why wouldn’t you, when the AI returns the favour at every corner?

There are literally hundreds of these racing events, and for the first few hours you’re going to be limited to low level races featuring vehicles that you’d expect to find at Bob’s Discount Bombs – crappy little hatchbacks and 1970s cars that struggle to break the speed limit when driving downhill with a tailwind. These opening hours are smothered with the Festival experience that the game is set in, with CGI moments introducing you to the sexy love interest race organiser, as well as a douche’s gallery of opposing entrants. It’s enough to make grown adults grimace. Stick with it though and the cheesy narration dries up and faster cars are unlocked within a couple of hours. Unlocking cars becomes the force driving you to progress, as many races are impossible to beat without the right car. I’d go so far as to say that car selection has almost as big an impact on race outcome as driver skill; often I’d struggle with a race five or six times, only to buy a slightly better car and beat it on the first go. It’s a problem that Forza has faced since its inception, and remains in Horizon. 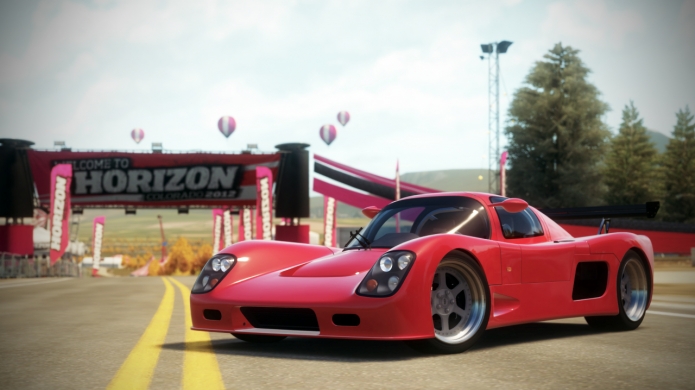 When you’re not racing around tracks, you’ll be heading to these races on the open road. A series of teleport stations exist to whip you between the map’s major areas, but they’re few and far between, and also cost credits to use. Initially you won’t mind spending five minutes cruising to the next race, as you’ll be rewarded Popularity points (think Kudos from Project Gotham) for drifting and near misses. There are also speed traps… but that’s about it. Horizon lacks the many novelty events that fill out most open-world racing games and, once the thrill of hitting your car’s top speed on an especially straight piece of road wears off, finding that next event soon becomes as much fun as driving from Sydney to Canberra in a Corolla. You can also pull up behind rival AI racers and start an impromptu race during these sections, but unless you’re driving the exact same class of car as them, which almost never happens, it won’t be a fair fight. If you do choose to race them, you’ll end up miles away from where you were headed.

It’s easy to ignore these issues when you’re blinded by the dazzling graphics that Horizon has thrashed out of the ageing Xbox 360. The draw distance literally stretches for kilometres, and those mountains far off in the distance can be driven to and explored. Lighting effects are simply breathtaking, especially when the sun sets and your car’s headlights automatically activate, peeling back the darkness just far enough so you can make out the next turn. Most astonishing of all is the incredible anti-aliasing; jaggies are my pet peeve on today’s consoles, but Horizon seems to have smoothed them all out with a digital power sander. Car interiors are a lovely touch, and the high detail mirrors are a welcome inclusion after seeing how badly F1 2012 botched them. Sound effects don’t initially have the same impact as the visual tour de force, overpowered by three stations of indie, rock and electronic music. The lawnmower engines in starter vehicles won’t help either. However, once I’d finally unlocked a proper race car, and turned the music off, I could really appreciate the work put into the sound. The focus here is on realism, so even the loudest growl has been tamed by the sound proofing of the engine bay, and adding new components can alter the way your car sounds. 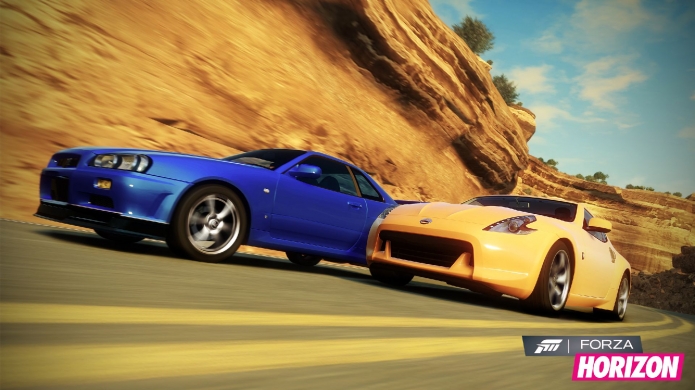 Heading into the multiplayer reveals a wealth of modes, divided up by player experience. Novelty modes like cat and mouse also have a dedicated lobby, but it’s the Skilled Racing lobby that I favoured most, where all drivers have the same car, all driving aids disabled. It’s the embodiment of fair racing, but the lack of mechanical damage rears its ugly head once again; with no penalty for smashing into other players, the quickest way to take a hairpin is to bounce off another car. I can see this being a huge problem for the game, in the same way it deterred me from GT5’s online shenanigans.

Forza Horizon is a strange attempt to diversify the Forza brand, but threatens to dilute what makes Forza so special in the first place. Thanks to a sloppy handling model, it lacks the precision required of its predecessor, so sim racers will probably struggle with the controls. Meanwhile arcade racers will struggle with more advanced driving techniques such as counter steering and throttle feathering. If you can get your mind into the right headspace for the game, approaching it as an arcade game with complex controls, there’s definitely fun to be had here. It’s just not up there with the likes of games dedicated to arcade or sim, but not both, such as Hot Pursuit or Forza 4.
Latest Comments
Link