There’s a pretty massive wall obstructing anyone new coming to this Warriors spinoff of Fire Emblem. Which is that these games, while actually tutorial-heavy in the early throes, still make a sweeping assumption you know something about the so-called Musou experience. That is, games where the central character or characters are OTT powerful, capable of swiping through a hundred or so enemies with a single attack, and with little-to-no reason why beyond just being more of a badass than any of the misfortunate fodder you’re now juggling with your blade, incomprehensibly in mid air.

These are a unique type of game, where any sort of meaning or grounding is kind of thrown away in exchange for a power trip that exists on its own power-fantasy periphery. We all love being strong in games -- it’s the central point of anything featuring a character progression system such as XP or skill trees -- but Musou titles take it to an all-new level that is as goofy as it is endearing, in a unique sort of way. And in the case here of Fire Emblem Warriors: Three Hopes -- a Warriors-like expansion on Fire Emblem: Three Houses, there is no exception to the nature of these sorts of games from a basic mechanics setup. Rather, layered on top of the warrior juggle that is a Warriors-like, is a Fire Emblem-centric menu-heavy interface that at times unnecessarily overcomplicates proceedings.

Which brings us back to that wall.

Fire Emblem fans (specifically Three Houses alum) will be able to buy into that character management layer alluded to above (which transforms into management of entire military forces), while the game’s very, very Japanese story, which is truthfully all over the shop and difficult to bite into, still features the relationship-fostering system of its source release. In this way, familiarity and the sense of game-universe expansion is a draw I can see tugging at the sleeve of only the most ardent of uniformed Fire Emblem devotees, but so much so they will be rewarded for going all in here.

"It’s sort of one of those new-fangled if you know, you know feasts required in this day and age for the niche to not only survive, but to generate enough level of mystique that newcomers abound inward...”


Conversely, Dynasty Warriors fans and fans of all the previous spin-off efforts that fall into the Musou bracket, such as the surprisingly enjoyable Hyrule Warriors and its sort-of-sequel, Age of Calamity, will get a kick out of all the Fire Emblem additions to the very, very tested and forever tried Warriors formula that has kept Koei Tecmo afloat all these years. It’s sort of one of those new-fangled if you know, you know feasts required in this day and age for the niche to not only survive, but to generate enough level of mystique that newcomers abound inward and the product finds so-called cut through.

But it’s a hard sell if you aren’t either of the above or an unapologetic weeb. And the wall here is really high. I’m a massive nerd for all things Fire Emblem, but the nonsense story here around the game’s main protagonist, Shez (who I renamed Hulk), and their Tyler Durdin-esque inner voice (only real), Arval, felt like a slog to sift through, despite this serving as a tangent to events in Three Houses. I can see how some people will love their banter and discourse, and in a lot of ways throughout the journey it’s a necessary device, but even in the lofty realms of the soap operatic storytelling that adorns the digital walls of all Fire Emblem entries, Three Hopes just took it to levels that it didn’t need to, particularly as something of a new(ish) experience.


As a mercenary, Shez Hulk finds themselves at the Officer’s Academy of the Garreg Mach Monastery, now a student driven by the desire to learn and grow stronger after a rather ego-crushing defeat. From here, traditional Fire Emblem vignettes play out and you’ll align yourself with a House, which then finds itself at war with the other Houses that occupy territory in the world of Fódlan, through which you’re now a central player. And while war looms large and tactical, it doesn’t stop small stories, subplots, relationships and basic teen drama from quickly becoming the more specific driver at hand. 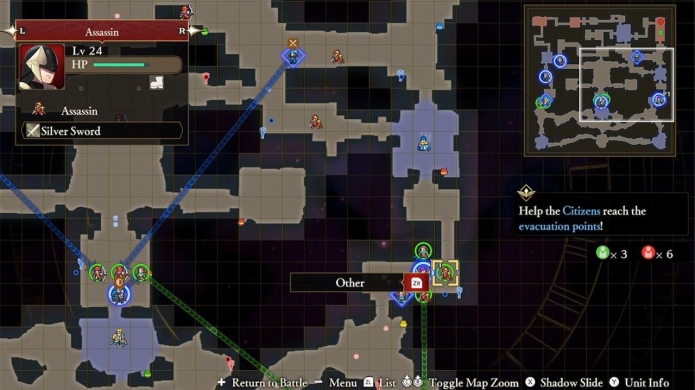 Of course in oppo, as the kids also like to say now, to this sort of convoluted and deeply layered storytelling in Three Hopes, comes the game’s interesting mechanical makeup. This is at its most basic a hack and slash affair, and that input barely shifts. Nothing Souls or Zelda or God of War about the process here. Rather, management of characters and resources, armies and dynamic side missions sit distractingly alongside the mash directive. And I say distracting because so much of it is superfluous to the outcome of your basic input. In whole sections of the game, with the very basic understanding of how that hack and slash works, you can ostensibly just accept anything that pops up on-screen, push through, and emerge triumphant. You might not get an S Rank, and maybe you’ll miss a story component or an equally gratuitous collectible item on the battlefield, but you won’t be in any danger of harpooning your efforts to finish what this game kind of forcefully starts.

"Within your camp you have a minor amount of control over actions that will advance your relationships with House and battlefield-recruited characters, as well as the option to level up, train, cook, clean, romance lite, and more...”


And sure, that all sounds a bit harsh. After all, new additions to the flow of gameplay include things like a fully interactive camp now, which differentiates based on the House you align yourself with at the start. And within your camp you have a minor amount of control over actions that will advance your relationships with House and battlefield-recruited characters, as well as the option to level up, train, cook, clean, romance lite, and more. In Three Houses much of this also played out, but did so in a more static, menued interface whereas here players at least feel like they have some level of control over Shez Hulk, and the choices for advancement and growth they make. 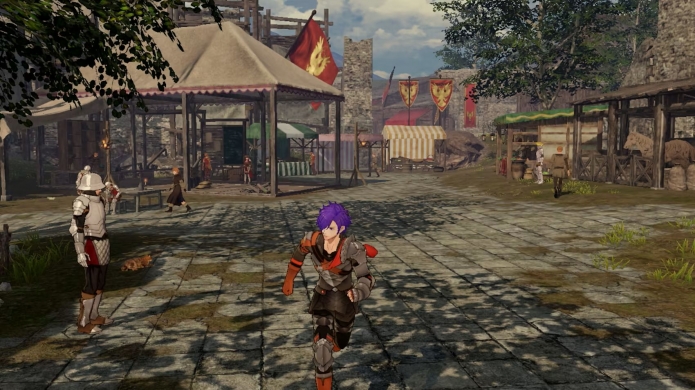 How you manage all of the above does impact the battlefield, and eagle-eyed players or Musouphiles will spend every waking moment toying with it all to gain the most from each combat experience. But more often than not and as alluded to above, it’s not always important to reaching your goal, which is to take out the Ashen Demon She Hulk, who is the main big-bad in Three Hopes. And I could spend time explaining to you the convoluted plot and why you’re gunning for her, which itself unravels at a steady pace over the game’s rough 20-odd hours of single House playthrough, but I’d be spoiling one of its best bits. If you’re actually willing to push through and knock on the Ashen Demon She Hulk’s door, chances are you’re going to become Stockholm Syndromed to all of Three Hopes’ moving character parts, as ridiculous and often childish as they are.

(In fact, it’s hard to deny some of the near wistful charm presented in this space throughout the experience.)


Fans of the genre and of developer Omega Force will likely eat up a lot of the layered content carried over from Fire Emblem proper here, some of which may rear its head in an upcoming Dynasty Warriors as consensus reigns on the positives (which seems to already be happening), while Fire Emblem fans and Three Houses fans, specifically, will feel right at home managing the game’s myriad relationships, their chosen House, and all of the micro that entails.

Newcomers, however, might find it all a stretch and a grind, especially given how the entire setup is geared. Three Hopes also isn’t any sort of visual or performance champion for the hardware. Framerates dip when you’re in handheld mode, while co-oping from the couch on a TV can also impact the game’s handling of its many, many sword fodder swarms. Environments are a flat-textured mess held up by sharp angles and repetitive architecture and landscapes. So much so, that it’s not a stretch to say this looks like it would have been happy at home on the Wii. This is at odds with the stunning CG cutscenes that bolster its delivery of soap, and perhaps isn’t how diehard Fire Emblem fans would have the series presented in a real-time 3D sense. And if you add the overall visual presentation to its mash-slash-repeat combat makeup, Fire Emblem: Three Hopes can be a hard sell outside of its key demo.

There’s value here for the matriculant willing to put in the effort, but you’ve really gotta want it. And even as a Fire Emblem diehard I found it a bit of a slog. Repetitive and more often than not caked in superfluous activity, Three Hopes is a mash of ideas drawn out beyond its measure, and if you take into account the option to play through each House’s own campaign, the target audience thins to a specific tine, and you might be confronted with an intimidating wall, looming convolutedly large.