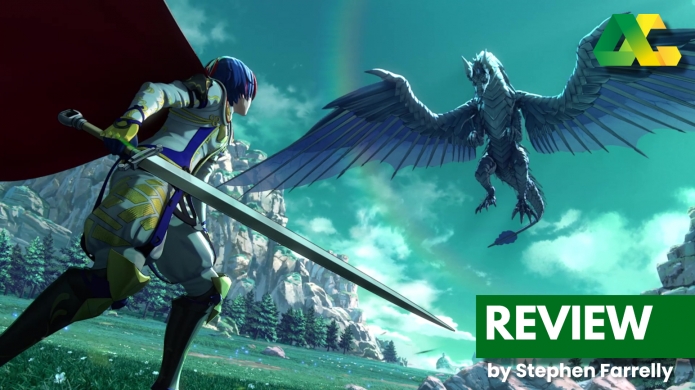 Despite its on-the-nose title (which you learn the reasoning for pretty quickly), Fire Emblem Engage is less an expansion of the series’ more recent forward-thinking and evolutionary design, and more a throwback to mechanics and design of old, equally packaged as a celebration of the long-running franchise. The Engage part of the affair is that you engage with protagonists past, now embodied as call-uponable entities harboured within rings -- 12 of them, in fact. And each of these ethereal heroes from another time and place can be teamed up with your new party members to unleash Fire Emblem powers and furies drawn from decades of the series’ history. Fan favourites Marth and Ike are there, along with others you might not even know about, lest you weeb weekly over this series. But for every reminder of the heroes that came before, Engage does a bang up job of putting this new rag-tag group first which helps the whole celebration aspect along in leaps and bounds.

Gone is the whole academy and schooling aspect of Three Houses, as we’re returned to fairly familiar makeup as far as engagement and tactical play is concerned. You still have a sanctuary (known here as the Somniel) and the opportunity to engage in vignettes and relationship growth with your team, let off the grid-based leash and free to explore and unlock and expand on the whole background of things. But Engage leaves much of that stuff as an aside, focusing more rightly, it should be said, on the topic at hand of tactics. Because in Fire Emblem Engage, things are tough. Really tough. And so you might want to sit up and pay attention, because while this is certainly a throwback-ish affair, it muddies the rock, paper, scissors design of the games of old and serves up something of a master class in micro and macro-management of both your party and the battlefield as a whole.

And take heed, dear reader. The permadeath route for party members is not for the faint of heart. 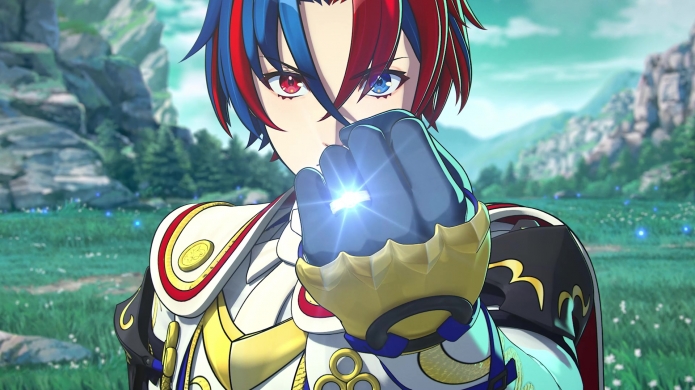 Fire Emblem Engage has you playing as the Divine Dragon, a slumbering prince awoken to a danger beset upon the continent of Elyos -- a precious land featuring a number of nations, each in possession of those 12 rings mentioned earlier. The Fell Dragon and a Corruption have come to wreak havoc for reasons not initially known, and while you -- the Divine Dragon, Alear -- might have been sleeping in an additional 1000 years, it seems destiny has other plans, switching off your Snooze button and bringing you into the land of the living where you meet up with a handful of devotees more cringey than squealing die hard fans at a BTS concert. And from here your journey begins.

"The cheese you start biting into from Engage’s outset remains for most of your journey, broken up really only by the cameos of Emblems past...”


When I say the game is paired back from its predecessor it’s not an understatement. In addition to streamlining how the game is played, Engage takes us back to JRPG tropeville in an effort to keep goals and mission statements on track. This allows Engage to present a classic good versus evil story with very little room for grey areas or plot twists and turns. The cheese you start biting into from Engage’s outset remains for most of your journey, broken up really only by the cameos of Emblems past. It’s not a bad thing, but if you were hoping for more relationship complexity and more nuance in the politics of the nations of the continent, you’re not really going to find it here.

The divergent stuff then comes in the form of side-quests known as Paralogues, which are ways for players to learn about each Emblem’s past while also tackling them in a one on one situation. There are other distractions from your quest to best the Fell Dragon, but it’s nothing overtly grand and you can main path the game without biting into any of its peripheral bits, but for story people out there and wannabe lore masters, Engage has lots of backstory and plenty of inter-team banter to unlock and, err… engage in. Of course partaking in the extra-curricular content also nets you rewards on the battlefield, especially if you’ve managed to bolster the support level of a comrade. This is a tried and tested Fire Emblem design element, but like everything else presented in Engage, it’s not full-blown and is relatively paired back and streamlined.

"The option to rewind time is hugely welcome, and Three Houses alum will be familiar with its benefits...”


Which ultimately leaves us with the game’s meat then, which is that tactical aspect I’ve harped on a bit about, and in Engage it’s really quite something. The Fire Emblem tent pole for combat has always been rock, paper, scissors and that rings true here. But with the addition of support units, magic and ranged units as well as the Emblem pairings (which aren’t at all locked -- you’re free to experiment pairing any Emblem with any party member), that traditional combat base becomes a bit more varied and interesting. The option to rewind time is hugely welcome, and Three Houses alum will be familiar with its benefits. Here, it can be used not too long after you’ve started your first real battle, and if you have permadeath switched on, be ready to use it a lot (it is finite though, so you need to be careful not to rely on it too much). 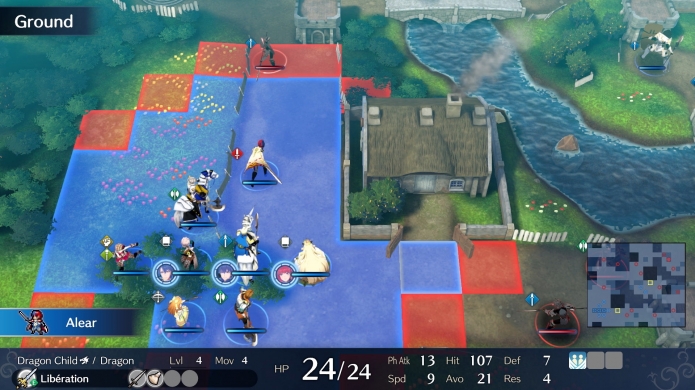 As with previous games, everything is played out in a gridded map. You can utilise the terrain for cover or vantage, and you’ll come across civilian residences and more that throw mini spanners in the works. Different maps and battles come with different winning conditions, but more often than not it’s a ‘defeat the enemy boss’ or a ‘wait for backup’ mandate that prevails. Again, so much of this is streamlined now and really very straightforward, but enemy AI and tactics are next-level and you need to be making sure your support levels are high and that your party member EXP and levels are managed properly. Engage tells you what a recommended base is to enter into any given combat, so you can prepare yourself, but even when you’re over the recommended level it’s important to stay on your toes because Fire Emblem Engage is really very hard. (Especially on the highest setting.)

"I’m honestly not a fan of the design of Alear -- the Divine Dragon, but maybe that’s because I’m old and prefer my main leads more… knightly than tween pop star...”


Presentation wise, Fire Emblem Engage is clean and shiny. It’s presented in a pseudo cel-shaded anime look which goes all the way back to the series’ debut on GameCube (with my personal favourite protagonist, Ike) and really shines here. I’m honestly not a fan of the design of Alear -- the Divine Dragon, but maybe that’s because I’m old and prefer my main leads more… knightly than tween pop star. Character designs are all pretty standard JRPG-slash-anime affair though, and I’d be remiss not to mention how empty the world can feel at times. Even the Somniel presents as a fairly sterile place most of the time, despite you working to unlock it all and fill it with life. After some encounters you get to explore an immediate area for sparkly goodies, but these moments feel superfluous and pointless and could definitely have done with some more love. 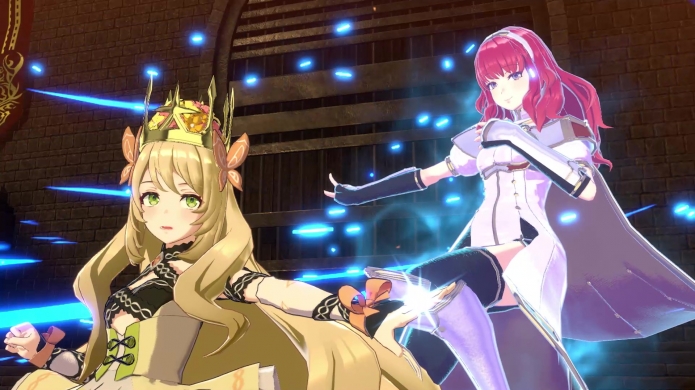 Still, there are some fun activities like fishing, cooking and farming. And the micro-management of your resources so that you go into each battle ready for anything is a nice driving force to utilise all of the extra activities available to you. It’s not as forward-thinking, design-wise, as Three Houses, but what’s here is still very good. And what you’ll take from all of the above will largely rest on what you want out of your Fire Emblem experiences anyway.

For mine, the paired back approach was a nice, near-nostalgic throwback to previous games and tapped into the core elements that made me fall in love with this series in the first place, but it also felt at times like parts that should have had more were largely ignored or forgotten, while other aspects that had some investment in them, weren’t all that important. In this way, Fire Emblem Engage feels a bit unbalanced. Not in detriment to its overall self, but certainly in ways where the game might have benefited more with looking into pertinent aspects rather than maybe crafting filler content.

Still, as far as challenge goes on the battlefield, Engage is right up there, and the game’s titular hook isn’t a be all, end all part of proceedings, serving as a functioning tool for combo experimentation as well as another source for that all-important nostalgia. All of which grabbed me far more than any other features of the game. And it’s something I happily engaged in for the roughly 45 hours or so I played and slaved and rewound. And as has become customary for this series, it comes highly recommended for die hard fans, while newcomers, in particular here, will get a lot from the game’s heady tie-in to Fire Emblems past. A great way to kick off Switch gaming in 2023.