From humble beginnings, the increasingly misnamed Final Fantasy series at last lands on the current generation of gaming consoles, and like the PS3’s God Of War franchise, and - to a lesser extent - Halo on the Xbox 360, Final Fantasy XIII gets to stretch its legs on new technology.

Deep down, there is a common thread driving the Final Fantasy series, it is not a continuing storyline, not characters, it is not even so much game mechanics, it is however a flavour that goes beyond the simple labeling of FF as a JRPG, a genre that the game will find itself shelved at stores amongst so many copycat releases.

Indeed there are universal visual elements, from the ornate and immense vehicle designs all the way down to haircut styles that continue a thread of developing commonality through the series.

For Western tastes, sometimes it can take a while to ‘get’ one of these games; true fans will detect that Final Fantasy flavour immediately, and be comfortable with the updates and new challenges that the latest iteration brings to the table. For the rest of us it may take some time to get our respective heads around what is happening here, which leads us into... 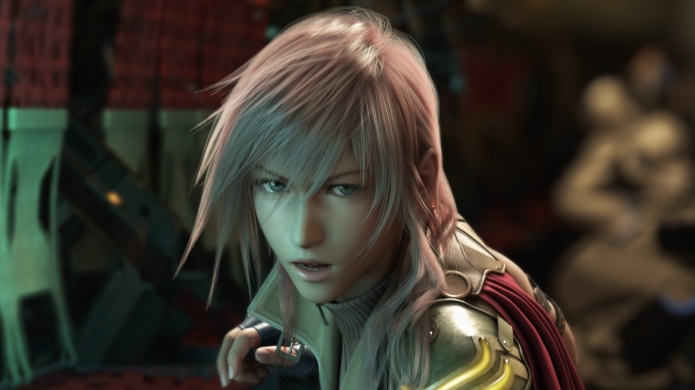 The storyline? OK, deep breath, ready? The floating world of Cocoon seems like a nice enough place to live, heck it’s clean enough, and all human needs look to be catered for.

But the citizenry are constantly in a state of fear. Fear of another invasion from the dreaded world of Pulse, fear of the Sanctum and their enforcing police Psicom, who conduct regular, somewhat sweeping ‘Purges’ of the population under the guise of weeding out those who contact the enemy Pulse.

Then there is the fal’Cie Orphan, a gigantic god like robot that purportedly provides power and protection to Cocoon. There are several fal’Cie, some supposedly benevolent like Orphan, some malevolent. But these overlords are also responsible for cursing folks with the mark of l’Cie.
The doom of a l’Cie is to fulfil their designated, sometimes ill-defined Focus, or be turned into a shuffling zombie. Unfortunately, fulfilling a Focus will result in the l’Cie being crystallised. A damned if you do, damned if you don’t situation.

We are introduced to the playable characters, beginning with Lightning, the enigmatic former Guardian Corps military officer turned sister searcher. Lightning has abandoned her promising military career to save her sister Serah, who was herself cursed with the l’Cie mark, and since disappeared.

Serah is betrothed to Snow Villiers, the brash, bold, and *ahem* big leader of NORA (No Obligation Rules or Authority), the resistance fighters in Cocoon. Snow’s group sees the folly of the Purges and urges the people of Cocoon to oppose the process, but as in many a video-game, the needs of the many are outweighed by the needs of the hero. Snow also rushes off to rescue Serah.

Sazh Katzroy also a former military type, is a tall man, with a Chcobo (think canary) living inside his afro hair. This relationship between large black man and his pet yellow bird-thing provide some of the more surreal moments in the game. 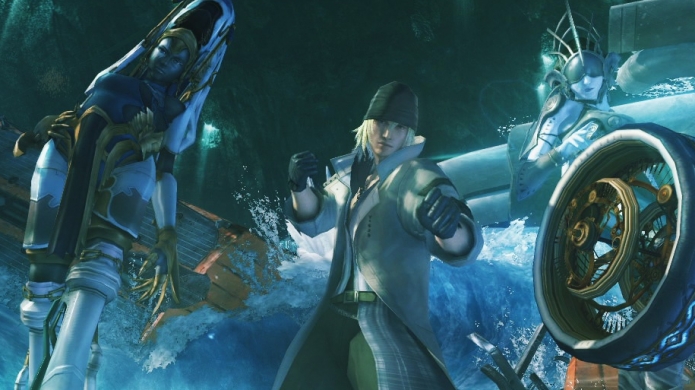 Finally the beginning group is made up by two kids, Hope Estheim, a young boy, and the constantly positive and upbeat Oerba Dia Vanille, who is more than she seems, and has some of the best hair physics in the game.

Lightning and Snow are not the best of friends, and even before they discover the crystallized Serah, resolve to somehow rescue her, and themselves become l’Cie, the team becomes fragmented, giving the developers time and opportunity to further tell the complicated back story through flashback and current cut-scenes.

Whilst the storyline is indeed original, for me – as your typical Westerner - perhaps used to trading bullets rather than emotional sighs in a video-game, this urge to fill most of the gaming time with cut-scenes of the constant dramatic byplay, or even gravity defying action sequences eventually became tedious.

For the first ten or so chapters of the game, the story line and game play is very linear, this is not an open world sand-box, nor should it be. Not every game needs to be open to exploration, look at the more Western orientated games such as Darksiders, or just about any First Person Shooter on the market to back up that conclusion.

But, when the game-play experience consists of a few minutes of cut-scene, followed by saving at one of the, granted, many save points that double as weapon and accessory shopping and upgrade locations, then running down a short corridor without encountering an enemy, followed by another lengthy cut-scene, one wonders if he isn’t locked in some sort of interactive movie, that simply requires saving at regular intervals.

Again, this is simply the Final Fantasy way, and unless you can appreciate the melodramatic, you are not going to enjoy yourself here. Thankfully there is the excellent battle system, were we finally get to play some game. But even here, the system is requisitely doled out at a pace that, while building confidence in understanding its complexity, can feel, for a large amount of time as press “X/A” to win easy.

So, another deep breath time as we launch into the new Final Fantasy battle system. 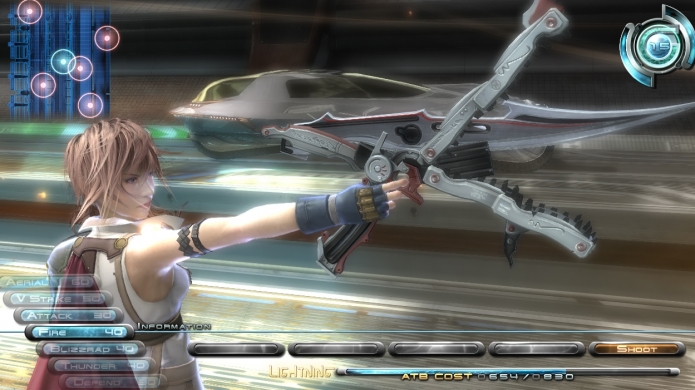 Players will control one of the current groups characters directly, with some indirect control over other team members managed by Paradigm shifts (more on that soon). Encounters begin when the player comes to grips with a monster group, or vice versa. Time it right, contacting from an unseen angle will result in a significant advantage. Each member of the combat group will start will full health, and perhaps some positive effects in place, if the player thought to use an item prior to enemy contact.

The Active Time Battle (ATB) mechanism returns under a slightly different guise, this time as a gauge that fills up, this gauge is segmented into slots, with different actions taking up one or more slots as selected by the player. Generally, once the ATB gauge fills, the player will execute the actions in turn.

Available Actions are determined by a character's Role, so a Sentinel will have a repertoire of highly defensive actions, a Synergist and Saboteur maintain supportive commands, a Medic is pretty obvious whilst the two damage dealing Roles are Ravager and Commando.

The RPG element of Final Fantasy XIII comes in the form of the Crystarium, a mundane, but good looking way to spend Crystogen Points (earned in battle) on leveling up different character roles. The leveling is controlled by story progression however, so no matter how many CP’s a character grinds out, there will be a cap on how powerful each of their assigned roles (each member can have multiple) can be at a particular time.

Whilst dealing damage to foes is important, an eye must be kept on a meter in the screens top right, if it can be filled using chains of sustained attacks, the monster will enter a “Stagger State” with damage multiplied against it for a period.

It is not until the Paradigm Shift mechanism kicks in, that things become really interesting. A deck of Paradigms can be managed by the player for each group; these are given names and dictate what role each character takes on in the battle. So in one Paradigm for example, both Sazh and Vanille might be Ravagers, dealing out damage at a rapid rate. But there may come a time when some healing may be necessary, this can be accomplished by downing a potion, or switching to a Paradigm where Vanille takes on a Medic role.

Non player controlled characters will use skills appropriate to the level of knowledge the team has on the target foe. Understanding that a creature is more susceptible to water attacks will help defeat it in the long run, knowledge is video-game power.

Balancing the build up of chain effects and the health of party members becomes a tactical battle dance that will take your eyes away from the onscreen animation during sustained battles. This is where Final Fantasy XIII is at its best. 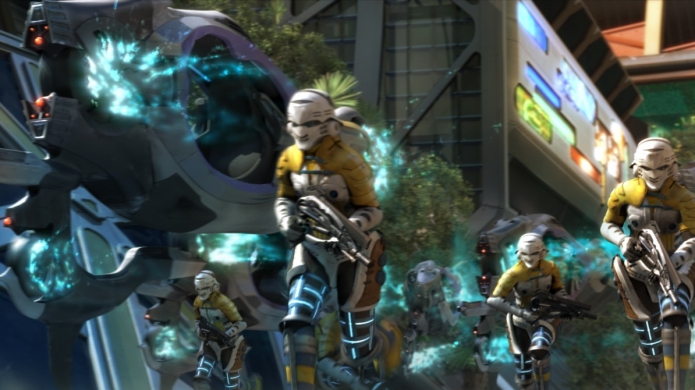 For a good part of the early game, we are introduced to some pretty impressive foes, be they creatures, mechanical beasts from Pulse or more traditional Japanese designed robotic menaces. But some of the battles can take mere seconds, and you wonder why you even bothered. There is incentive however, as each battle is rated on time taken and damage dealt. Rewards are higher for more efficient and timely destruction.

There is an extra layer of complexity added to the system coming in the form of Summons. As l’Cie, each character will meet and have to defeat creatures known as Eidolons (long time fans of Final Fantasy will recognise these). These encounters are more tactical than the regular battles, requiring the character to build up Gestalt by impressing the Eidolon with appropriate skills, actions and timing.

Once defeated however, the Eidolon will be available for summoning once per battle, using a powerful skill set to help defeat the more threatening of foes. Summoning adds further flavour to the combat system that, during the bigger encounters at least, keeps battle fatigue from the door.

Visually, Final Fantasy ticks all the boxes, detailed, colourful settings, with environments changing at a pace that keeps things fresh despite the significant linearity of design during the majority of the game. Battles are particularly beautiful, though when things get tense, you will find your eyes fixated on the health and stagger bars rather than the slick effects and camera angles.

The soundtrack, as expected, is full of multi-layered orchestral numbers, light in mood, upbeat in delivery. In fact, given the situation of the group, listening to a breezy jazz number as the party approaches a charging behemoth, feels somewhat out of place.

Audio effects capture the flavour, though the concentration by Square Enix’s sound team to ensure every single character footfall resounds through the speakers seems like over exuberance on getting things correct.

There are some small divergences from the core game-play, a smattering of mini-games and side quests, but obviously, this time around this is not a priority of the designers.

Final Fantasy XIII strays just enough from its predecessors formula to feel fresh for the fans. On this generation of consoles, there are plenty of other JRPG’s with as many features, hours of game play and wistful dialogue made up mostly of sighing, but FF XIII still deserves to hold a significant position in the pantheon of this genre.
Follow Us
Latest Reviews
More...
News Feed
Advertisement
Latest Threads
Log In
Create Account | Lost your password?