After all the trouble had with The Pitt, I was really surprised to see Fallout 3's latest DLC episode, Point Lookout, resting quietly at the back of all the other Game Add-Ons available from the Xbox Live Marketplace. But, then again I had logged on only an hour or two after the content was set to be made available, so it likely hadn't been prioritised as a featured item.

Whatever the case may be, I'd been chomping at the bit to get my hands on it. The Pitt was a great departure from the series, whisking me off to a fully reimagined Pittsburgh replete with new enemy types, mutations and goodies to uncover. Unfortunately, when that DLC was released, it was broken and took a bit of re-haxing to fix. It was a shame because it actually did affect the overall experience, and the game never *really* felt stable. In fact, I think I can say the same for Broken Steel, which equally just felt like it had been pushed out the door (despite the tantilising addition of a raised level cap), so I wasn't holding my breath for Point Lookout to actually arrive in solid condition.

Imagine my surprise though, when firing up the game I was met with easily the sturdiest Fallout experience yet (and that includes the original game). It looks better, doesn't crash (or at least hasn't yet) and plays smoother than any other iteration of the series thus far. 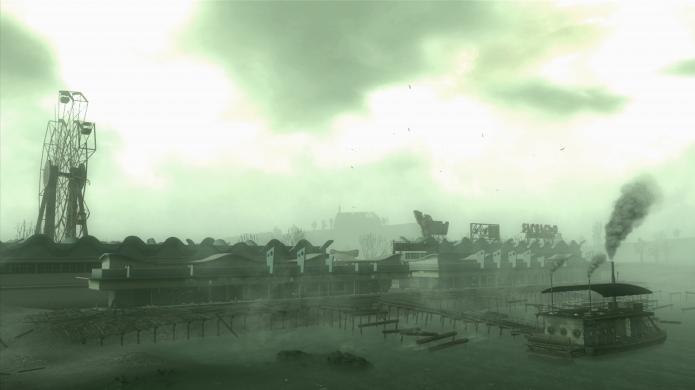 You'll be told, after installing the DLC, there's a Ferry waiting just near Arlington Library. When you get there you'll be greeted by a mother trying desperately to find her daughter who apparently ran off to see the world. She'll give you your first quest, and then a simple chat with the boat's captain will secure your passage to the muddy shores of Point Lookout.

It's a lot to ask, but it would have been awesome to ride the boat longer and watch it actually reach its destination (as opposed to just loading) - there's something about travelling with true geometry in a game that adds to the greater sense of journey, and with Fallout (and its massive game-world), this is a bit of a missed opportunity (though I realise it's technically challenging).

At any rate, you arrive at Point Lookout and the captain immediately points out there's some action going on turning your attention to the inviting husks of smoke rising up into the air from the island.

You land at the front of a pier though, away from the smoke and apparent action and have a whole new area to explore. Off in the distance is a lighthouse, a massive mansion overlooking a fantastic Cliffside and dense, thick brush off beyond the abandoned Carnival (replete with Ferris wheel) staring directly at you. Instead of wondering in though, I decided to jump straight in the water to see if there were any goodies about (mostly because of all the moored boats crashed up against rocks or simply overturned and half-buried in the water's bottom).

For anyone playing the game who doesn't know, under each buoy you'll find a stash of ammo crates and first-aid boxes (among other lewts), so it's worth swimming around (again, another first for the series, as you'll end up being in water a lot on Point Lookout), and this will actually reveal to you some nice hidden set-pieces as well (two of which become missions if you find the starting point for them). This all immediately showcases a far more robust world than that of The Pitt of Operation Anchorage, and given I'd barely even moved on from the water of whence I came, Point Lookout really began to entice me.

So after some serious swimming and looting, I moved up through the abandoned Carnival set-piece. Skeet-ball, pinball, dodgem cars... you name it, it's there, along with a fair amount of creepiness the further in you head. What's equally great about all of this is, you're not really given too much to go on. No people running up to you to start full-on story arcs and certainly no main direction (beyond the alluring mansion and its smoke).

As mentioned above, the main area is basically an island and is split into three major areas with the shoreline, dense muddy swamps (think mangroves mixed with Deliverance) and the Cliffside area. The overall game-world for Point lookout is quite big, and because you're not locked to corridor or walkway paths ala The Pitt or Operation Anchorage, the sense of adventure and discovery is that much more engaging.

What's more is this is furthered with the discovery of all the area's grottos, hidden tunnels and caves and natural gas deposits. There are also creepy hick-filled huts, an abandoned motel block, a Cathedral and some seriously horror-inspired areas as an added treat.

The unnerving element throughout Point Lookout also differs it from the rest of the series, and you really get a sense the writers just had fun crafting another post-apocalyptic chapter of lore that maintains various Fallout 3 rules, but doesn't let itself get bogged down in keeping things overly familiar.

In fact there's very little familiarity here. Enemies come in the form of Creepers, Brawlers, Scrappers, Bruisers and Trackers - all of which are clearly inbred locals who not only have centuries of inbreeding on their side for their superior strength (they give Super Mutants a serious run for their money), but also a clear dose of mutation from radiation and copious bottles of Moonshine alongside all the Buffout, Jet and Psycho. As well as Tribals; a cast of weirdos who worship the native Pungi fruit, and Smugglers (who're essentially Point Lookout's Raiders).

Critters that litter the land are Mirelurks, Swamplurks, Rabid Dogs, Bloat Flies and Ghouls (of which there's a new "Swamp Ghoul"). But amidst all the bad stuff, there're also a few people on the island with civility, but as you'd expect, it's with these people you'll find your stately tasks being handed out, and this time around quests are no mean feat.

With the strength of half the island's baddies, you're going to be churning through a lot of your gear. I've stored quite a bit in my travels and still managed to find myself struggling in portions. There's a hardware store on the island, so it's a good idea not to kill its keeper - lest you find yourself travelling back to the Capital Wasteland here and there for much needed supplies or repairs.

Quests in Point Lookout are by far among the most engaging I've experienced - especially the main quest which is full of great characters and goodies. In fact, even the side-quests here are great, and thanks to the new setting and different enemy types, you're going to be hard-pressed getting bored or over the experience quickly. There's so much more to explore and discover on Point Lookout, it almost feels like a shame the aesthetic and setting have been simply offered as DLC (basing a sequel around here and parts beyond would be awesome) but whereas I spent - on average - around four hours with all the last DLCs (sans Broken Steel), I've spent close to six or more hours here, and a portion of that was simply through exploration.

Again though, my only gripes come in the form of a less dynamic system that keeps things segregated. It would be great to have an introductory effect on game-worlds, like, introducing a strong character from say, The Pitt, to Point Lookout and vice-versa, just to then have procedural AI running amok and hopefully changing things on a dynamic level. Maybe for the inevitable sequel.

My idealism aside, Point Lookout has given me some of the most enjoyable Fallout 3 moments, and then some. And thanks to decisions I made, I now have two safe-house areas to store gear so I can come back here any time I like to take pot-shots at the inbred locals - seriously, what's not to love?