This year we've decided to delve into DLC for seminal review purposes because it seems abundantly clear that, despite being the “in thing” for developers and publishers alike to do, the gaming community at large still aren't 100% sure it's justifiable. It might only be $15 to nab this new content, but when most PC formats still offer content packs and updates free, should anyone be shelling out their hard-earned cash for a few extra hours of enjoyment during such a dire economic crisis?

Well hopefully giving you an insight into just how rich such content packs are (or aren't) will help you make such a decision. And in this case, we're taking a brief look at the first DLC package for Fallout 3, Operation Anchorage. 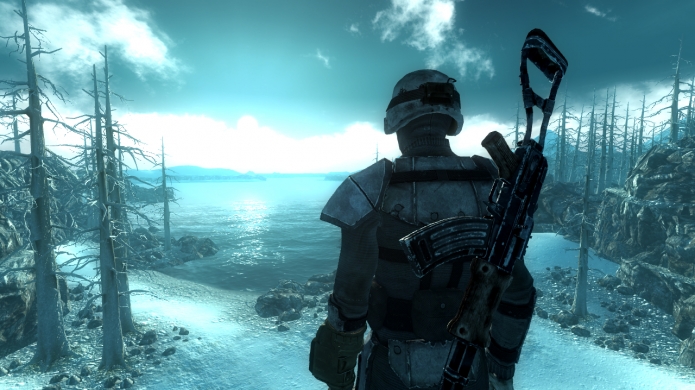 If you're reading this, I'm going to assume you've played enough of Fallout 3 to know what I'm talking about, so if you haven't, be weary of potential spoilers.

Operation Anchorage takes the simulation pod experience you had in Vault 112 and expands upon it. Once you've downloaded the content pack, a little while into the game you're given notice you can now receive a new radio message. Tuning into this source reveals a distress call from the Brotherhood Outcasts who're locked in a bloody battle with Super Mutants at Bailey's Crossroads Metro. Listening to this broadcast immediately activates the Anchorage quest and all you need to do is head toward the turmoil until you're eventually led through some ruins to a lab where the simulation kicks off.

Apparently having a Pip-Boy means you're one of the only people who can access the simulation, and the Brotherhood Outcast need you to complete it because it's the only way to gain access to a locked armoury. You've been promised a dig at anything in there on the proviso you jump into the pod at which point you probably do it, because the rewards far outweigh the cost of potential “Sim Death” which also equals real-life death (and let's face it, you don't really die anyway, so what are you waiting for).

The differences between gameplay in Fallout 3 and the Anchorage simulation are almost immediately apparent.

Anchorage plays out like a shooter. It has the same RPG rules as the main game, but you can't loot bodies, and once an enemy is dead they digitally disintegrate anyway (though anyone with the Cannibal Perk can still chew on the bodies, which is weird and looks funny because you're essentially devouring thin air). The environments are much more straight-forward and the clear lack of that greyish radiated hue in the air, replaced with a bellowing cold blue sky and whistling Alaskan winds, makes for a nice change of scenery.

You're also light on weapons, aid and equipment. Instead these are handed to you at various points throughout the simulation, and in the form of ammo stations and health stations. You initially only have a sniper rifle, silenced pistol and the new Gauss Rifle, but once you clear the first mission at hand, you're able to requisition different fire packs such as Sniper, Infantry, Explosives etc as well as your own fire-team to help you out. You can issue commands through a squad leader, but I found most commands you issue seem to fall on deaf ears.

You'll begin by broaching Cliffside installations, but eventually you'll operate from a central hub to four other areas – clear them all and you complete the simulation (it's a little bit more complicated than that, but I don't want to spoil the whole experience for you).

It's not very difficult, and about the only replayability here rests in the intel cases you can collect (there are 10, but I only found seven but you'll earn a new Perk). Beyond that, the real prize rests in about four hours out of the Wastes and the goodies that lie behind the locked armoury door.

So is it worth the $15 odd dollars? If you're the sort of person who's still roaming the game-world, and will continue to do so for a while, yes. Without a doubt. If you've already finished the game and haven't bothered with it since, I doubt this is going to give you more than the four or less hours of game time it adds. It really is in place more as a reward for people still grabbing as much as they can out of post-apocalyptic Washington DC, and for Xbox 360 Fallout 3 players, it adds ever-important Achievements in the way of four for 100g.

But ultimately, the real reward in Operation Anchorage comes with how you'll utilise your newfound goodies in the Wastes – let us know what you've done.