Arcade versus simulation – these three words are the fuel that fires most of the arguments burning across the Codemasters F1 2012 forums. In one corner sit the nerd-core simulation fans, who demand that the game engine spends more time calculating tyre warping during a 4G hairpin turn than it does the shiny reflections on the McClaren’s chrome paint job. In the opposite corner are those who don’t want to spend four hours practicing a single track so they can qualify on the pole, they just want something to pick up and play that makes them feel like an F1 driver when they’re not filling out TPS reports at work. Appeasing both crowds is a seemingly impossible task but, to my pleasant surprise, F1 2012 seems to have done a rather good job of it.

Personally, I enjoy both approaches to the genre, but my full racing cockpit, expensive German steering wheel, head tracking unit and seat shaker suggests that I’m partial to the simming side of the experience. As an iRacer I’ve spent weeks on a single track, so didn’t expect F1 2012’s handling to present much of a challenge. How wrong I was. 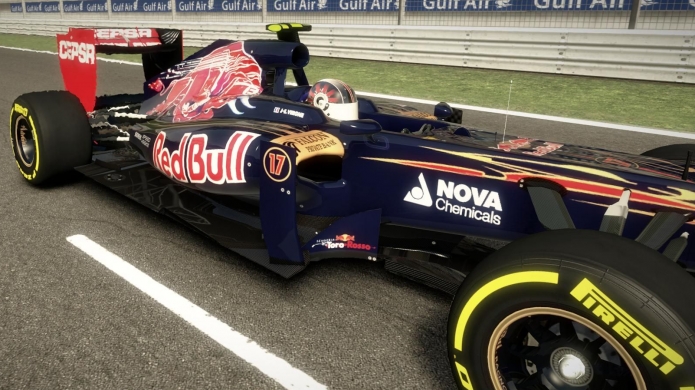 This year is the third iteration of Codie’s F1 reboot, and vehicle handling is easily the biggest improvement. After spending an hour figuring out the cryptic wheel settings (hint to Codemasters – you might like to explain what the hell Steering Linearity and Saturation mean if you’re going to allow users to change them), I finally found a configuration that didn’t feel like I was controlling a radio controlled car. By the fourth close encounter with a concrete barrier it became apparent that this year’s cars understeer like a road train doing 150km/h if you carry too much heat through a bend, necessitating earlier and more careful braking to coax them through the corners. Obviously I played with all driver aids off – flicking these back on will allow novices to still burn through hairpins with reckless abandon. The tail end of the car seems more planted this time around, allowing judicious use of the accelerator with less chance of it biting your face off with oversteer. Overall I’d say it’s achieved the holy grail of accessible game development -- easy enough to jump in and drive, but with an underlying depth that will take time to master.

It’s such a shame then that the rest of the game has changed so little. One of the most significant differences is the removal of the Grand Prix mode, so those who like to role-play through a full season as one of their real world heroes will be disappointed. Instead the focus is on the revamped Career mode, which kicks off with the new Young Driver Test. This glorified tutorial lasts about an hour, teaching newcomers the basics of hurtling around a racing track at speeds that would scare a speeder bike pilot. Veterans have no option to skip this training, and after completion you’re presented with the option of selecting one of the lesser driving teams. Only after completing a season will you be offered a chance to drive for a faster team, so don’t expect to win many races when you’re driving the F1 equivalent of a Corolla. 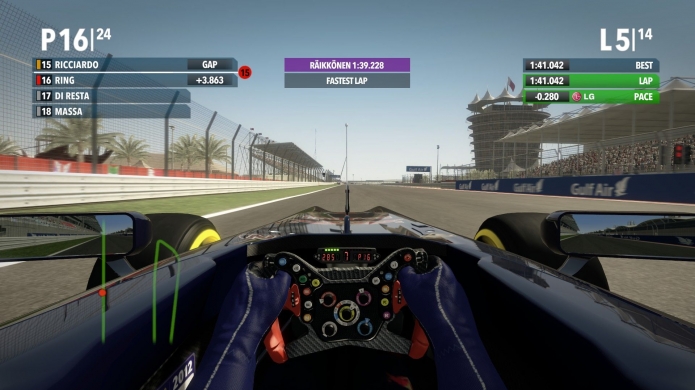 During each race you’re presented with a challenge to beat your team mate, and doing so rewards you with upgrades that propel your vehicle to death-speed faster than ever. You can also select a rival driver, and if you beat them you’ll be awarded something. I never managed to do so, so have no idea what that something might be. Don’t judge me until you try racing against the AI on professional mode, and at this pace I was always several seconds off the fastest qualifiers. Come race time the AI makes many of the same mistakes it’s made for the last three years though; able to drive at light speed through slow corners, yet bunching up and driving like a granny in crowded conditions, so despite my shoddy qualifying times I always placed relatively well in the actual races.

Driving these cars on a dry road is hard enough; cover the surface in puddles of low-grip water and it becomes downright insane, so wet weather handling is incredibly important to the F1 experience. Sadly the game’s modelling of rain is rather confusing – despite the downpour I was tearing through, my car would often handle much better on dry tyres than wets. AI cars can happily plough through small lakes while wearing Option tyres designed for dry weather, and the “rooster tail” of water that follows a real F1 car in the rain is pathetically under-represented. Making matters worse, my engineer would usually suggest the exact opposite tyre than the one that gave me the best performance.

Other issues that have plagued the series since F1 2010 are also still present. While these were acceptable when the new series first launched and we were all dazzled by the stunning presentation, they’re less so after three years of development. Rearview mirrors are less than useless, with trailing cars only appearing when they’re about five metres away, a massive issue when you’re racing cheek to cheek in a pack of cars. The penalty system is apparently controlled by a blind steward, and driving my entire vehicle over a chicane instead of through it didn’t result in any corner cutting penalties. Vehicle damage is modelled with the depth of a Wacky Races cartoon, allowing extremely rough driving before any crucial bits fall off. Finally, the player still can’t control the vehicle in pit lane, with each car equipped with the AI of K.I.T.T. every time they need a tyre change. Codies has blamed the pit and damage problems on licensing issues, which I don’t buy for a second considering every other racing game on the market doesn’t have these restrictions. 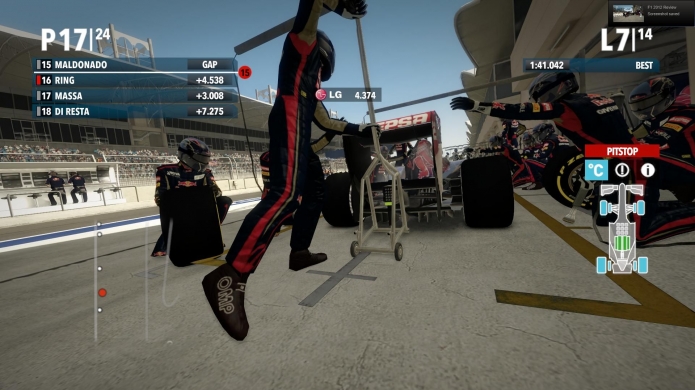 Visually very little has changed, and I found it hard to see any differences other than a new camera shake effect and a subtly altered colour palette. That’s not such a bad thing though, as the game was a stunner when it launched and remains so. Note that I tested the PC version; I’ve read some rather worrying comments about the PS3 port. The lack of visual improvements are easy to forgive though, as you’ll be too busy listening to the stunning new soundscape to notice. No longer does each engine sound like a supercharged whipper snipper, instead capturing the essence of a box of engineering wizardry that has the power of 700 horses trapped inside. It truly is an amazing game to listen to.

After twenty hours of playing the game, I can happily say that I had a truly enjoyable time strapped into my virtual cockpit. Like the very best racing titles, with all driver aids disabled F1 2012 captures the hypnotic rhythm and flow that occurs when you’re racing the perfect line through a track you’ve spent hours practicing. Flick traction control and ABS on and newcomers will find it a much more accessible beast, allowing them to feel the satisfaction of beating Schumacher without sacrificing their social life. The only problem is that there’s really very little reason to upgrade from F1 2011 other than the inclusion of new teams, cars and two new tracks. If Codemasters had resolved the numerous bugs and gameplay issues that have been present since day one of the reboot it’d be a different story, but if they can’t do it by now, chances are they never will.
Latest Comments
Link