Although cutting edge at the time of its original release, the 3D visuals that served as the backbone for id Software’s seminal 1996 shooter Quake could now be referred to as lo-fi. Large blocky characters made up of very few polygons. Textures that bleed both detail and pixels in equal measure. Multi-story environments with few colours and fewer objects to highlight or draw one’s gaze.

The first small-town environment in the excellent first-person horror meets shooter experience Dusk, lives up to this ideal. With only a handful of houses and buildings to explore, how they stand-out in the sea of lo-fi visuals is both retro in its approach and minimalist in how it cuts to the core of what we might call a classic first-person shooter.

Movement is fast in Dusk, exceptionally so. As both a reminder of speed as a key combat mechanic in the first-person genre as well instilling a sense of momentum in the stark, sparse, and moody outdoor environments found within. Creeping around with slow movement tied to jump scares and flashes of action this isn’t. Even from its first few levels, Dusk has a keen sense of pacing and a commendable grasp on the horror genre – alternating between the quiet and creepy and all-together unsettling with that of the over-the-top arena battle.

That place where dual-wielding shotguns and taking out hooded weirdos and cultists happens at both a steady clip and via a steady clip.

Where Dusk excels is how this understanding grows and expands alongside its ambition over the course of its three campaign episodes. A fact that might be a by-product of the staggered Early Access release, where new episode launches took place over the past year. Not a criticism per-se, or anything more than a statement - it highlights the growth of developer and designer David Szymanski. Episode Two is more memorable and ambitious in its design, setting, and pacing than Episode One. The Escher Labs level draws inspiration from Valve’s Half-Life and Portal whist still feeling fresh and original. 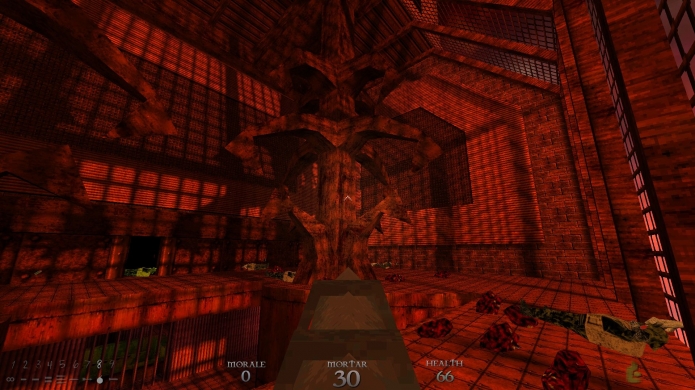 In Episode Three things get crazier and more impressively outlandish with a brilliant ending that lives up to the first time you see a vaguely creepy message written in blood strewn across a wall. Or heard the first few chords of the brilliant original score that alternates between pulsating metal and brooding John Carpenter-like synths.

It’s this balance of inspiration and creativity and variety that makes Dusk an exceptional shooter and an immersive horror. One that sits alongside its peers rather than simply playing homage to. Of course, it doesn’t hurt that in the pure action stakes - Dusk has the goods. Challenging without ever feeling cheap, it follows a traditional structure and framework that focuses more on fun and sheer intensity than the outright difficulty we tend to see when it comes with horror games. Even its time-trial approach to re-playable levels and the post-level breakdown of enemies killed and secrets found feels earned as opposed to tacked-on.

Jump pads, vertical-ity, punchy and powerful shotguns, an explosive rivet-firing gun that acts as both a rocket launcher and a rail-gun – Dusk is fun pure and simple. Varied enemies that offer predictable patterns to learn and react to, where timing and an understanding of layout ups your survival chances considerably. It’s a classical approach that highlights what made the best first-person games of the ‘90s so memorable. Even level progression, which leans heavily into finding the right coloured key to open the right coloured door – is handled in the same manner. 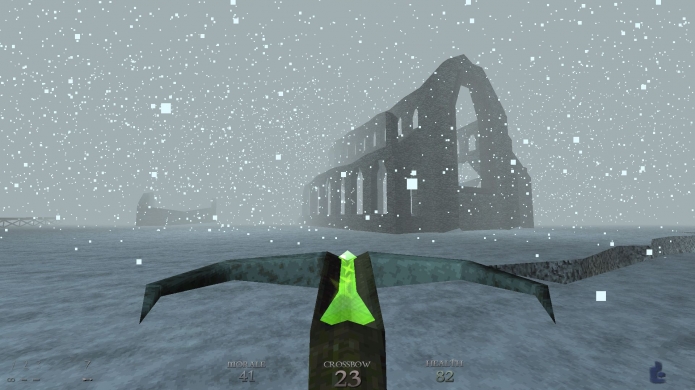 The fact that this structure can work at all in creating and supporting a mood-drenched horror experience, is a testament to how well Dusk pulls of this magic trick. Gone are the maze-like levels of the genre’s past. And even when these elements do show up, they’re simply there to mess with the player’s sense of direction. For that pure horror-like disorientation. Alongside the references and nods to the genre’s past lies a deep well of lore and environments that tell a bleak tale of ancient forces being unleashed upon a small town - with the unwitting help of government intervention to boot.