Very few genres outside of the action RPG give the player clothing items to equip that are named after conflicting human traits, meaning that your pants could very well be vengeful and your gloves honourable. And sometimes when you match these traits together, called an item set, your clothes decide to reward you with some bonus attributes - very technical and completely reasonable stuff, of course. Items and clothing also come in various colours, which would be unrelated to their actual, you know, colour. This means that orange items would be pretty awesome in the additional stats and attributes they give you, like a bonus to blocking and agility, whereas white items pretty much mean that they’re of no real use to anyone in the game-world and make you wonder why a shopkeeper would buy five of them, let alone one.

Dungeon Siege III is a combat focused loot-driven action RPG at heart; one where treasure chests erupt in an orgy of gold and items of various colour each time you open them - a regular in-game occurrence which thankfully never gets old. But there are many things that this new Dungeon Siege, from developer Obsidian (who have taken over the franchise from Gas Powered Games), does differently to both its direct predecessors and other more well-known releases, like the Diablo series from Blizzard. These differences, in a lot of cases, could be described as streamlining or even simplification, but then again this is a genre where a single mouse click and keeping an eye out for blues and purples are the high watermark for interactive comparison. 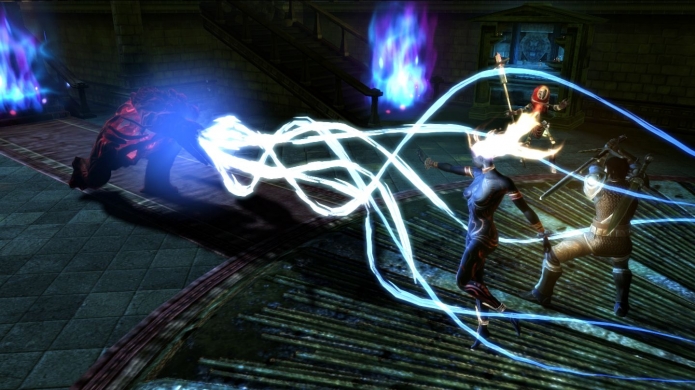 So we’ll dispense with the bad news first, which would probably only upset the more hardcore fans of the genre out there, with the fact that playing Dungeon Siege in co-op can only be done off a single save, with no option to transfer characters or items or even when you’re done tackle a higher difficulty with your newly orange-only equipped dual wielding Angelina Jolie lookalike ranger called Katarina, but I digress. Strange as these omissions may sound, they only really affect the replayability of the game. But in an action RPG replayability is an important part of what is in essence a genre that is built on repetition and reward, and apart from tackling the game with a different character, Dungeon Siege III unfortunately probably won’t end up being a game that can be revisited and played for months. But apart from this minor (or deal-breaker for some) and slightly odd direction, thankfully, the rest of the game is surprisingly great.

Although throwaway in a sense, the story is refreshingly built around a feud between two factions of humans; those loyal to the 10th Legion and those loyal to the Church, led by a charismatic adversary, and all-round not too bad on the eyes gal’ by the name of Jeyne Kassynder. This is refreshing in the sense you’re not fighting a demon or giant monster who’s somehow managed to trick an unsuspecting power-hungry lord into finding a loophole that lets them enter the worldly dimension to wreak havoc. Due to the nature of the game, the story itself is not all that in-depth, but when the narrator keeps laying on each bit of information in a very throaty voice about “Jeyne Kassynder”, you can’t help but get a little bit upset about her stubbornness and all round dislike of the 10th Legion. You see, she’s a bit of a bitch.

Throughout the game players will make choices to decide the fate of certain characters and towns, which will either add some weight to the overall story, or simply provide a few different bits of nonsensical text at the end of the game to those that opt to skip the its many, many, lines of dialogue. And it’s through the narrative portion of the game that the co-op design, although limited, begins to make sense. 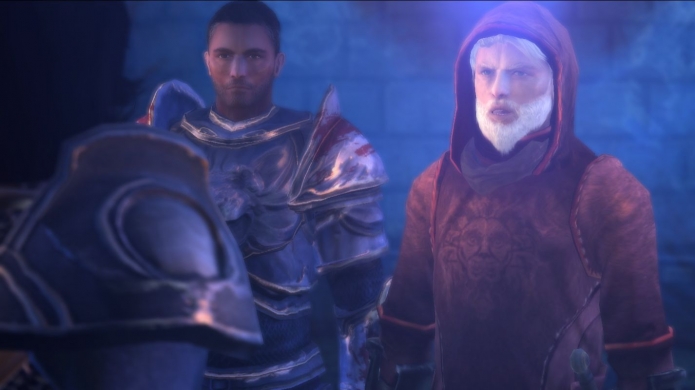 Arguably simplified for consoles or streamlined to make it more palatable to a mainstream audience, the end result is still the same. And that is that the co-op is a lot of fun in Dungeon Siege III, and it’s differences are probably built around the type of co-op experience it tries to offer, and that is one that is seemingly built around ‘same-room gaming’. This focus, after all, is a perfect fit for consoles, and one that still works great when played online. Apart from the usual fun to be had in combat it also extends to agreeing or disagreeing with dialogue and plot decisions. This is not to say that the game isn’t a lot of fun when played in single-player, as it is, but like with anything revolving around killing generic mercenaries and picking up loot, more is better than one.

As a descendant and member of the dying 10th Legion, each of the four playable characters provides the usual line-up of classes, from the stoic sword and shield-ery of Lucas to the fire and fire-related spells of the flame-haired mage, Ajani. As the game itself is story-driven and purposefully linear, with each character having their own arc in the overall quest, outside of equipping some new armour there is very little cosmetic changes that can be made to each character’s appearance. Even items and weaponry that can be equipped are limited to each character, which as a design choice suits the overall game. But all the stat driven leveling that one would expect to find is here, and for the most part is streamlined for the better. For fans of the single mouse-click approach, this unfortunately (for some) means that the game does play better with a control pad, which it seems to have been built from the ground up for.

Controls are kept simple as are the skills and abilities for each character, which are mapped onto the three face buttons on the control pad. With two weapon stances and a defensive stance, switching between them is easy to do with the shoulder buttons with the three face buttons changing to reflect the three different, skills, spells, buffs, and other abilities across each stance. This literally means that you will only have three abilities in total to use when wielding a two-handed sword, or sword and shield combo. Streamlined is definitely the word to use, as opposed to simplified, mainly due to how well it works with a control pad, and proves that this is a genre that can work as well on console as it can on PC. It makes the combat feel slightly more than a disinterested hack and slash affair where you could potentially be playing the game, watching a film, texting a friend, and solving a Rubik’s Cube, all at the same time. The flexibility of using a control pad adds some strategy and fluency to the action that would normally be quite hard to replicate with a mouse and keyboard. 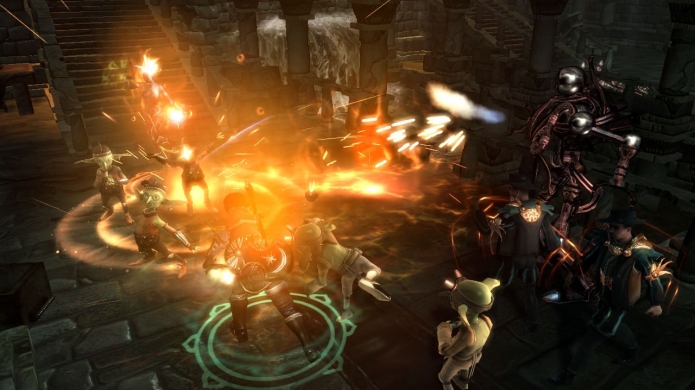 Being limited to three abilities or spells for a particular stance may sound limiting but each new level up allows for upgrading each ability in different ways as well as upgrading talents that sound as handy as they do nerdy. Like the talent for Katarina that states something along the lines of “each new point into this talent increases Katarina’s chances to strike with a critical hit by 4%”. These small touches as well as the detailed and varied stat bonuses applied to weapons and items that are both explainable like +20 Block and unexplainable (as in neither the game or manual provide definitions) yet still cool sounding like +35 Doom, add considerably to the overall experience. And help ground the game as a streamlined yet still very detailed action RPG.

So, Dungeon Siege III, although taking place in the same world, shares very little in common with both its predecessors and even its namesake. With most of the action taking place in castles, forests, caves, factories, mountains, swamps and numerous other locations, there are very few dungeons to be found at all within the game. Which overall speaks volumes for potential expectations one may have with the game, and in failing to meet them could be an unfair catalyst in dismissing what is a fun, polished, and streamlined action RPG experience that deserves your attention.