The element of surprise has gradually drained itself from gaming since the introduction of the web. I remember fondly when the only thing you knew about upcoming titles was the vague preview that featured in the latest gaming rag. But in this day and age of 24/7 news cycles, hype has well and truly become the status quo. So when you write about games for a living, it’s almost impossible to ignore the plethora of information pushed your way.

I was sceptical when I received my review copy of Driver: San Francisco. I hadn’t really heard anything about it, and judging by the lukewarm reception it had been provided by the media and my colleagues, I didn’t expect much. Thankfully, it turns out that the element of surprise does decide to make its acquaintance every now and again, and in this case, it’s for the better.

Fans of the original Driver series will find themselves satisfied in the fact that the ridiculous changes to the formula that occurred in the subsequent PSX sequels have disappeared. Don’t expect to find yourself struggling through awkward gunplay moments or even getting out of your car. Driver: SF truly lives up to its name, so if you’re looking for something to replace GTA4, you might want to look else ware. 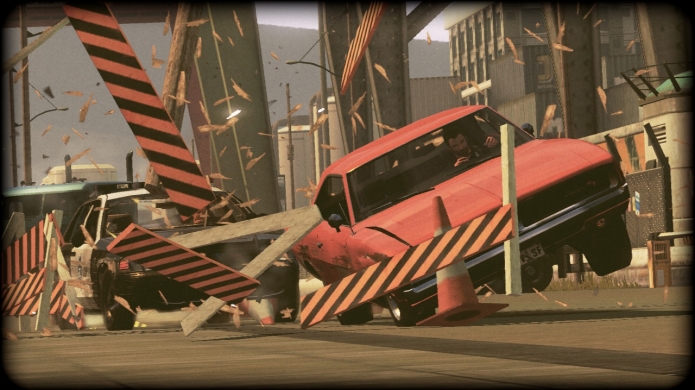 Driver: SF (or DSF for short) puts us back behind the wheel with series stalwart John Tanner, who seems to have found himself running the Jack Bauer gauntlet. He’s finally taken down arch nemesis Jericho and transported him from Turkey back to San Francisco for incarceration. But before you know it, a car chase begins and Tanner is t-boned, knocking him into a nasty coma.

From there, the game begins, and we’re introduced to Tanner’s dreamscape which seems to encompass the whole of SF. Being a dream, some element of poetic license is provided, and we’re introduced to one of the coolest gameplay mechanics I’ve had the pleasure of playing in a while. Shift, as it’s named, allows Tanner to jump between drivers of the various vehicles that line the hilly streets of the Bay Area.

As a result, players can change vehicles at a whim, allowing for some incredibly cool sequences. Need to chase down a perp? Why not shift out of the cop car into a civilian vehicle a few blocks away and ram into your suspect? Or, how about getting behind the wheel of a truck and setting up a roadblock? It’s a ridiculous amount of fun, and inventing new and creative ways to complete various tasks – from scaring the crap out of driving instructors to setting up crashes for tabloid news teams – keeps things interesting.

With this in mind, Ubisoft have decided to divert from the mission-based linearity of the original games by creating a city-wide sandbox peppered with various unlockable vehicles and various scenarios. The story is paper thin, bordering on ludicrous; it simply exists to provide some element of context for the abilities you have. The meat and potatoes of the game are more suited to Burnout than GTA, where building “willpower” points through missions allows for new cars, abilities and access to bigger parts of the city. 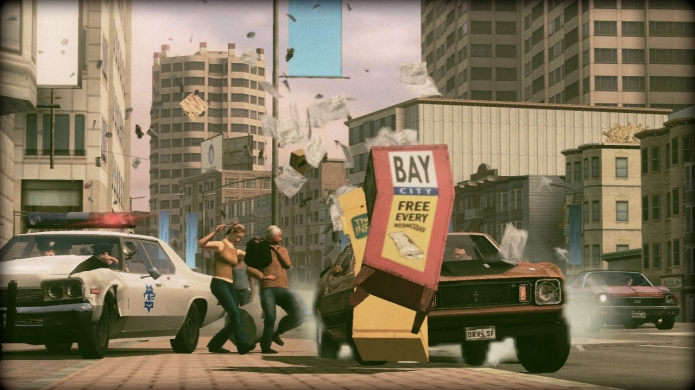 Before long, you’ll be jumping between cars in a frantic, jagged manoeuvre, racing to get across the city in the quickest time possible. The eclectic mix of motown and modern soul pumps through the speakers of your vehicles, providing a soundtrack that seems strangely suited to a game that has such a bizarre mix of elements. Guiding your path is a brilliant minimap that shows just the right amount of direction and placement, along with notifications that let you know when you’re going AWOL.

There’s also heaps of great humour to be had when you shift, since conversations between the existing occupants of the car are vocalised over the radio. Tanner’s attempt at continuing broken conversations while simultaneously swerving his way between oncoming traffic is fantastic, and almost every car seems to have a different driver altogether, providing personality in an area where the game could very easily fall into generic disarray.

The actual driving, however, is as fast and smooth an experience as you would expect from a game that takes place entirely behind the wheel. Drifts and soft breaks are the meal of the day here, so expect to be swinging around corners with your handbreak firmly planted whenever possible. It, like the game itself, can become a little silly at times, especially after the Dodge charger you just jumped into flops around a u-bend like a Mini Cooper with slicks.

Special abilities like boost and ram are interesting, yet generally useless additions – the combination of shift and drift tends to provide almost infinite possibilities for advantage, and the aggressive nature of the ram mechanic will tend to slow you down rather than provide any level of leverage. You’ll find most of the thrill comes from the intelligent AI of other drivers who will dodge, break and smash to avoid capture or overtaking. 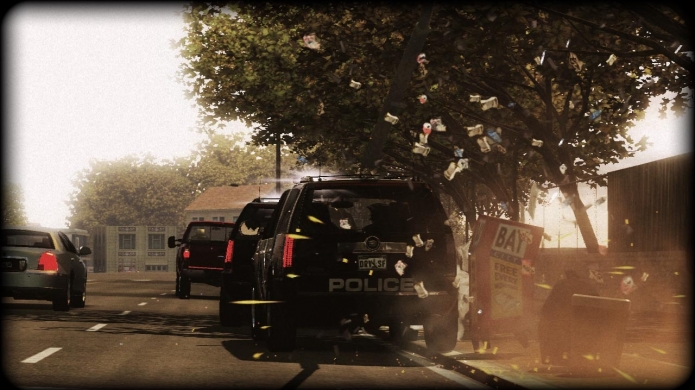 The car list is impressive, although American heavy, with lots of Dodges and Fords. Every now and again you’ll get access to a GT or McLaren that are incredible to drive, especially when you’re bouncing in and out of a pair of them side-by-side, weaving in and out of highway traffic. All of this is powered by a brilliant engine that keeps everything humming along at a crisp 60FPS, regardless of how much carnage is occurring on screen.

Multiplayer, obviously, takes the shift mechanism online via a number of various modes modelled on versions of tag and so forth. They’re all buckets of fun, especially when you’ve bundled a group of friends to shift together, setting up heady crashes or making life hell for the AI. DSF takes advantage of Ubisoft’s UPlay Passport system, which requires a code that’s included with a new copy of the game, so be aware if you’re grabbing it second hand – you’ll pay for the multiplayer privilege.

Driver: San Francisco isn’t the arcade racer’s saviour, but it does introduce a new and interesting twist on the standard proceedings. The forgettable story is forgiven when the package of fast, furious and fun driving is brought back to save the series from obscurity. Reflections, you are given a pass for Driv3r, this one’s a keeper.