As you take control of Goku, escorting Gohan in what amounts to the basic tutorial section for this action-RPG reimagining of classic Dragon Ball Z, gathering some items for crafting you’re presented with a somewhat disturbing fishing tutorial. Fishing in an action-RPG, that makes sense. But when Goku pulls out a fake tail he had Bulma make for him, attach it to his rear, and then dip it into the water for a fish to nibble on - well, that also makes sense. For Dragon Ball Z.

Growing up on the DBZ as a kid (I’m actually rewatching the anime at the moment) I was more than a little keen to check out this new action-RPG set in the universe. Finally, a Dragon Ball Z game that would focus on story as much as it did combat and other weirdness - in the impressive visual style seen in 2018’s excellent Dragon Ball FighterZ. On the story front there’s an immediate sense of familiarity and comfort when you hear the Head-Cha-La theme song from the anime series, and even more when Goku and Gohan jump onto the flying Nimbus and head off to see Chi Chi.

Hearing Head-Cha-La as you’re getting a beating from an iconic character of the Dragon Ball Z universe is also a nice touch that pulls on the old nostalgia strings.

Chi Chi, as depicted in Dragon Ball Z: Kakarot, acts as a chef that throughout each story or Episode can whip up status improving delicacies that act as ways to permanently improve your stats such as: HP and melee attack stats, defence rating, or KI. Food can also provide temporary buffs like increased XP for those that don’t mind a bit of the old fashioned action-RPG grind to become OP. The early moments of the game also introduce the collectible currencies and orbs required to purchase and upgrade skills and passive abilities. And as they respawn after some time the obsessive collector gene we all carry will switch off. Ahh, sweet relief.

“Hearing Head-Cha-La as you’re getting a beating from an iconic character of the Dragon Ball Z universe is also a nice touch that pulls on the old nostalgia strings."


The action itself is episodic like the anime, with the first batch of cinematics introducing the first antagonist and villain in a recreation of the Saiyan Arc. And it’s here where the game introduces combat. Which is somewhat similar to Xenoverse, where mashing the melee or Ki blast attack buttons unleash basic combos. Special attacks consume your Ki Pool, a resource that is constantly building up and can be charged up but leave you open to attacks. Attacks like Kamehameha consume quite a large amount of Ki on the account of it being a screen-filling energy blast. Pulling off counter attacks also consumes a surprising amount of Ki which adds to a fairly tactical setup faithful to the lore of Dragon Ball Z. 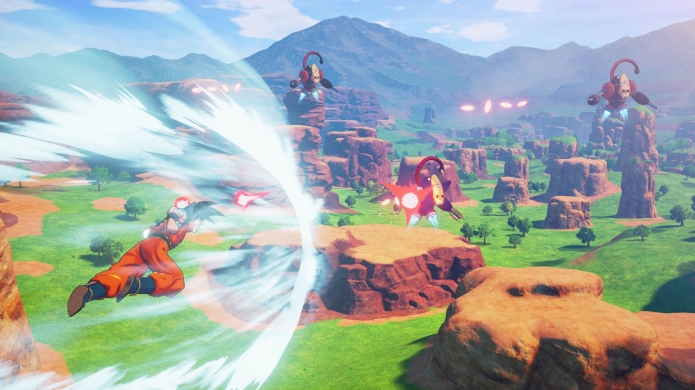 Following the Saiyan Arc in the first Episode you eventually team up with an old enemy to take down Raditz. While you only control one character at a time, you can have two supporting characters that have different behaviour types that dictate how they act and react in battle. For example a Defensive Character will sometimes step in to absorb attacks while an Aggressive Character will lend a beating hand in your combos. As battles rage on these support characters fill up their own Support Gauge that you can then use to unleash even more specials attacks like Krillian’s Solar Flare that stuns or Piccolo’s Special Beam Cannon.

For fans of the series, this is all very cool to see realised in a game.

Before long you’ll find yourself in control of other characters like Piccolo and Gohan as they begin their training for the arrival of the next villain and the next Episode that covers all of the more well-known Dragon Ball Z story-arcs. As expected, this is also where more of the world opens up for you to explore, fly around collecting minerals, cook new and wonderful dishes, or simply blast the local wildlife. Again, for Dragon Ball Z fans there’s a lot to enjoy and get a kick out of. Finding the Pilaf Gang not having much luck trying to collect treasure in various places is always amusing, and with side missions and enemies scattered around the map zones, getting experience points and resources for cooking is just one of the reasons to go out and explore. 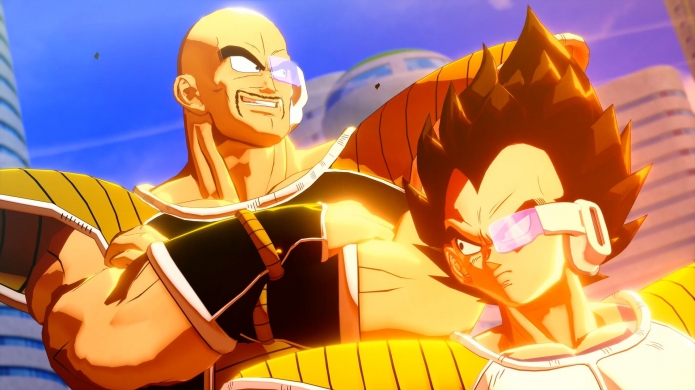 Travelling around by the way, pure DBZ. Flying is activated by double jumping, and if you dash in mid-air you’ll then be surrounded by the Iconic Ki Glow - which looks awesome in addition to providing a very welcome speed buff. But, there’s a price to pay as dashing consumes Ki which can be a little annoying if you get into a fight and your Special Attack juice is low. It’s with little touches like this though, paired with the anime cel-shaded look, that showcase the level of detail put into the game. Dashing around on foot and suddenly stopping results in a classic skidding sound, where stopping mid-flight and slowly falling draws on specific sound effects from the anime.

“Travelling around by the way, pure DBZ too. Flying is activated by double jumping, and if you dash in mid-air you’ll then be surrounded by the Iconic Ki Glow."


Fights against each of the main villains are broken up into several sections with cinematic breaks at regular intervals that progress the story, but the in-between Intermission stuff does feel like filler where you’re simply waiting for the next story-arc to begin proper. Which, in some way, is true to the series’ renowned slow-motion pacing. That said, I’m grateful the game didn’t force me to travel the 625,000 miles of Snake Way. 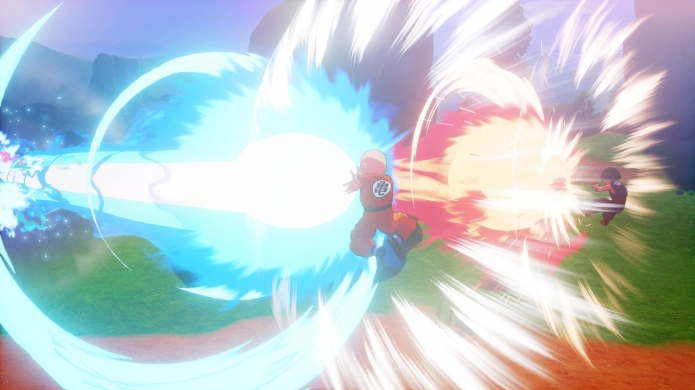 As a fairly straightforward action-RPG unfortunately there really isn’t all that much depth to the systems in play, which once you figure out begin to feel a little stale. As someone who tends to grind for power as to make encounters less of a challenge, the Raditz and Nappa fights felt a little too easy. But, as soon as I felt like this might be the sort of game you could enjoy for its story and not worry about stats, big bad Vegeta took my grind-powered 77k+ health pool all the way down to 1.6k. So yeah, either it either throws you into the deep end later on or I just really suck at fighting games.

In the end, Dragon Ball Z: Kakarot is still worth celebrating. For one it’s different from the usual "fight fight fight" setup of past DBZ games, with a focus on telling classic stories from the series. The ability to explore the world is especially wonderful for fans, and King Kai’s fantastic jokes make you yearn for a new Netflix stand-up special. Still, as a fan, I was left wishing there was more depth and activities to make the world feel more alive. Overall, it's a decent role-playing experience faithful to Dragon Ball Z that’s action-packed and entertaining. A game tailor made for DBZ fans. Nothing too groundbreaking, except for the attacks breaking the ground.
Latest Comments
No comments currently exist. Be the first to comment!
Commenting has been locked for this item.
Follow Us
Latest Reviews
More...
News Feed
Advertisement
Latest Threads
Log In
Create Account | Lost your password?