Dirty Bomb is perhaps more aptly named than Splash Damage intended. It’s not just that the official website actively encourages player to fight dirty to achieve success, it’s that the explosives in the game are at a point where they pave the way for divisive tactics.

At least, that’s where the game is currently at.

This is an important distinction to make because Dirty Bomb is a free-to-play title (exclusive to the PC, no less) that is bound to change and evolve over the course of its life. Splash Damage has said as much: as long as there’s an active community of players, that community can expect new features and changes over the life of Dirty Bomb. (It’s actually in open beta, but local PR has given the all-clear to review it in its current form.) 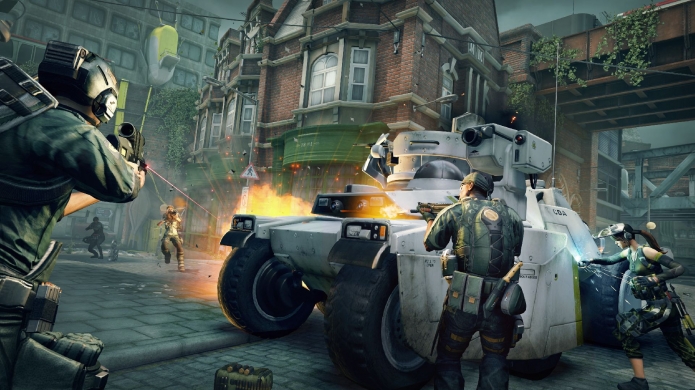 In this respect, Splash Damage understands that a loyal community can aid the free-to-play logic of features and changes being introduced long after launch. The problem, though, is whether the fickle attention of the shooter community will give Dirty Bomb the chance it deserves to shine. Just to clarify: I’m referring to myself just as much as other PC shooter fans when I say “fickle attention”.

For instance, most recently I enjoyed the hell out of Evolve in its first two weeks of launch before I moved on to other games. I was done with Evolve before the release of the Behemoth monster, Arena Mode and the subsequent patches that may have addressed some of the issues I had with the game at launch. One issue it wouldn’t have fixed, though, is the strong emphasis on team play to have any hope of winning against the monster. This strong emphasis on team play is also true of Dirty Bomb.

Make no mistake, this is by design, but it also acts as a detractor thanks to a combination of a steep initial learning curve and how overall enjoyment is linked to the performance of your team. Unlike shooter staples such as Battlefield or Call of Duty, where team modes still reward lone wolfing to a certain extent, Dirty Bomb rewards players that push the objective and work together.

It favours a character-based Merc system in lieu of classes, which is a point of confusion at first glance, given how the Mercs slot into recognisable roles, yet require a level of familiarity before these roles become self-evident. There is a simple training mode on offer, but beyond the basics, a lot of the finer points of Dirty Bomb will be learnt the hard way: suffering death after death in the online arena. 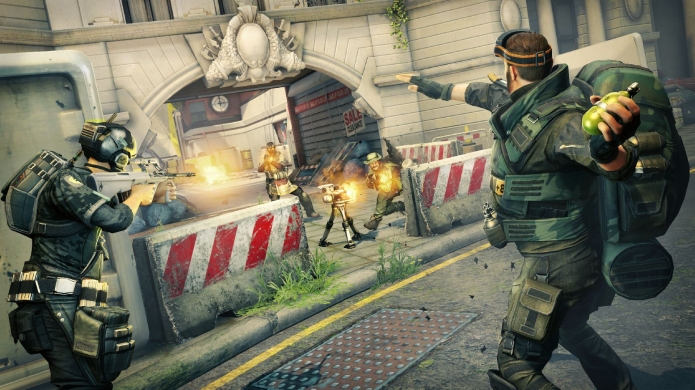 Given it’s been in closed beta for a while now, there’s a bunch of players who have already unlocked new Mercs and loadouts, either by persistence or by forking over cash. The premium component of Dirty Bomb is also a point of contention. It used to cost $19.99USD for the Merc Starter Pack during the closed beta, but that’s now $29.99USD for the Ultimate Starter Pack, which permanently unlocks the same five Mercs – Proxy (engineer), Vassili (recon), Sawbonez (medic), Arty (support) and Fragger (assault) – albeit with an additional 15,000 in-game credits and access to two loadout cases.

If you want to embrace the ‘free’ part of the free-to-play model, you’ll be reliant on patience, persistence and luck to unlock all of the above. On top of this, the Mercs that tend to top the ladder and provide the most effective killing power to the team are the ones that are purchased with 50,000 in-game credits or $9.99USD apiece. In my time with Dirty Bomb, Nader was a popular choice for infuriating tactics.

On paper, Nader’s grenade launcher makes her a perfect choice for clearing out entrenched enemies, destroying health or ammo stations and turrets, or dishing out damage aplenty onto objectives such as the EV that has to be escorted in one particular map. In reality, I’ve seen her used to camp spawn areas and annihilate respawning players. Given the always-visible respawn timer and the lack of momentary invincibility on spawn, you can quite literally spawn into staring at a subsequent respawn screen.

If that’s not bad enough, Nader also has the Martyrdom ability that lets her drop a grenade upon incapacitation… manually. Depending on where she’s been incapacitated in terms of the respawn counter, she can hold onto her grenade and wait for enemies to run past for an easy kill (or a few). Ignoring the reality that a perk with the same name and function (minus the ability to manually activate) was removed from the Call of Duty series (with good reason), it goes against the grain of what Dirty Bomb teaches you to do. 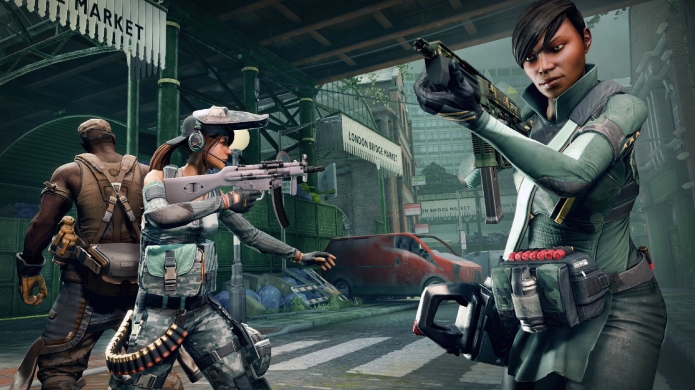 Reducing an enemy’s health to zero puts them in an incapacitated state, wherein they’re free to move the camera and report enemy movements to their team (with VoIP or text). They can also be revived. Because of this, Dirty Bomb encourages you to kill the incapacitated enemy properly, but they take more than a few rounds from your average firearm, so it’s often best to stab them. Given the extreme pace that Dirty Bomb is played at, you’re expected to identify that you’ve just incapacitated Nader, hopefully from range, and to not go near her body lest she scores an easy insta-revenge-kill. Put simply, it flies in the face of the fantastic momentum the majority of the gameplay embraces.

Martyrdom is an ability I hated at the preview event, and it’s one that seems to have an even greater explosive radius now. That’s just one of the examples of how a single Merc can dominate a team. Bushwhacker, one of my favourite Mercs, has the ability to drop a sentry turret to automatically guard an area. Dropped in an unexpected corner, you’re almost guaranteed easy kills, not to mention the fact it can be used to guard your back as an early warning measure. It also essentially allows you to add an additional shooter to your team’s overall player count.

Two Bushwhackers on a team is a deadly combination, and I witnessed an area being completely locked down by two well-placed turrets, meaning the team could focus its attention on other routes. Bushwhacker is a fantastic character to play, brilliant for defending objectives or areas, but he’s a bastard to come up against, particularly if there’s more than one player using his character. Then there’s Rhino, a tank in all but name who carries a mini-gun that’s as apt at locking down an area, laying down covering fire, or dishing considerable damage as he is at soaking up incoming fire.

In a recent game, I watched a single competent player use Rhino to create a one-man chokepoint, which he held for the majority of the round. When I tested out Rhino, it was a similar affair, as my enemies seemed oblivious to the fact that my additional hitpoints and brutal mini-gun rendered most head-on assaults against me ineffective. On an individual level, this type of success provides a fantastic feeling of achievement, but it also shows that a team filled with bought Mercs (with in-game or real currency) has a greater range of diversity for predefined roles that are better suited to specific modes.

There are only two modes on offer at the moment – Objective and Stopwatch – across five maps, with the former mode involving one team attacking and the other defending, while the latter has the teams switching offensive/defensive roles at the mid-point of a match. Stopwatch is the better of the two, as the second round has to be completed faster than the starting team that set the time, adding to the pace and intensity of the gameplay.

It also shines a light on a couple of Dirty Bomb’s other challenges. Namely, the restriction of three pre-selected Mercs per map and the lack of restriction on specific Mercs per map. The latter is trickier because I sure as hell wouldn’t want to earn 50,000 credits or fork out $9.99USD on a Merc only to join a server that told me I couldn’t use them. At the same time, there’s a reason why class limits are effective balancing tools in games such as Day of Defeat and Splash Damage’s own Enemy Territory.

The pre-selected issue rears its head more so if you’re playing with a non-communicative team comprised of zero Mercs with medical capabilities or no Mercs with support capacities. If you haven’t selected the right Mercs for the mode, taking into account that Stopwatch switches between offensive and defensive roles halfway through, your team will feel the pinch.

Dirty Bomb may have just hit open beta, but there are as many veterans of the closed beta playing as there are new players. For a team-based game, my 16-odd hours with the game, to date, have shown that a lot of people don’t communicate, be it via text, VoIP or even using the commo rose. This means that the adept players are proficient at picking the right Mercs and routes to get early advantages in modes, while newcomers will hit early hurdles that may stop them from seeing the fun that can be had when a team works together in Dirty Bomb. 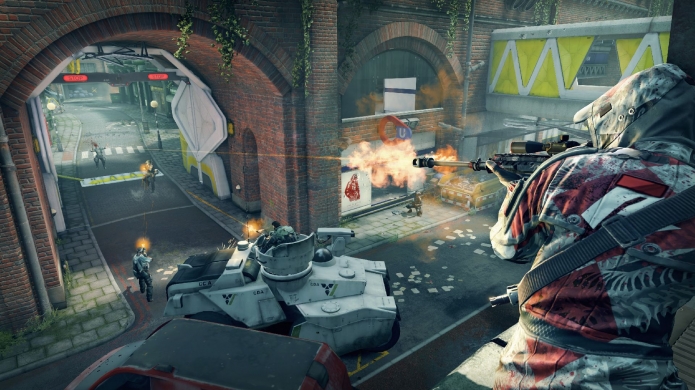 And it is fun. A hell of a lot of fun, actually. But the inverse is, unfortunately, true when your team isn’t work together, or you’re being dominated by an opposing team that has its shit together. There’s a rock, paper, scissors mechanic at play that discourages lone-wolfing and makes you reliant on other players for health, ammunition, ordnance or all three (depending on which Merc you’re currently playing as). Splash Damage has unapologetically designed such an engaging team experience that the individual experience can suffer when you’re playing by your lonesome with random players.

Sure, you can still play your role and grind through the missions that recycle every three hours, but there isn’t the same satisfaction to be found compared to other team games when your side loses not because of your individual effort, but because the game is so skewed in favour of a united team being the best tactic that a solitary player can easily miss the fun forest for the frustrating trees.
Latest Comments
Link