What do you do whilst waiting for Diablo 3? Probably pick up Torchlight actually. But if you are in the market for some Diabloesque lite action, then perhaps Din’s Curse is the answer.

Din’s Curse can be slotted into that netherworld between the ‘casuals’ and the ‘hard-cores’. It is a game that will happily run on your lap-top, can be fired up in no time and shutdown within seconds of the boss rounding your cubicle corner. Yet it comes packed with a significant amount of RPG depth.

Din is a giant godlike champion who has cursed you to a second life of servitude. Apparently I squandered my first life selfishly. So after picking a trade from the usual fantasy catalogue it is time to save a few towns in the fair (and dangerous) land of Aleria.

A few short random generations later and our new Hero is in town, a fledgling hero not nearly ready for three of the four levels of difficulty offered by the game.

Let’s get the visuals out of the way; Din’s Curse features a wide range of graphical options, complex shadows, detailed models, trilinear filtering, bloom toggle and more. Still, even on the best of rigs, it is obvious this game is shooting for the 10 minute gaming market.

The isometric display is fixed, and character facings are orientated to the three horizontal axis restriction imposed by this view. Likewise spell effects and dungeon layouts fit into a grid format, but building transparencies kick in at the right time so the action does not get hindered. 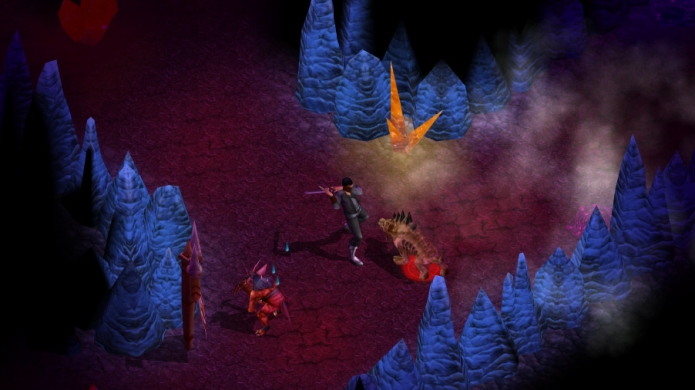 After speaking to Din (the only character with a speaking part), and a few of the towns NPC’s, it is time to head into the dungeon to do some questing, and gather some fine lootage. Here is where DC gets to show off its dynamic quest model.

Quests follow a variety of models, but many are time dependent. ‘Go and kill Barry the Beast in Lvl 5 before he causes revolution’ is just vague enough to make you hurry up, because you never really know when the revolution will start, but if you get the job done, the town will breathe easy for some time. Other quests are more traditional in their form, gather objects, destroy evil objects, escort NPC’s and so forth. Some are optional, some are core, if you manage to clear all the quests from a town, you can move onto the next.

Clearing quests gains XP and reputation (Townsfolk will provide gifts as your reputation grows). Typically in RPG’s once XP opens levels, players can improve skills. In Din’s Curse, there is no skill tree as such, instead all skills are available from the start, and each class has up to three skill groupings to choose from. The higher skills – whether passive or active – require larger skill point allocations. 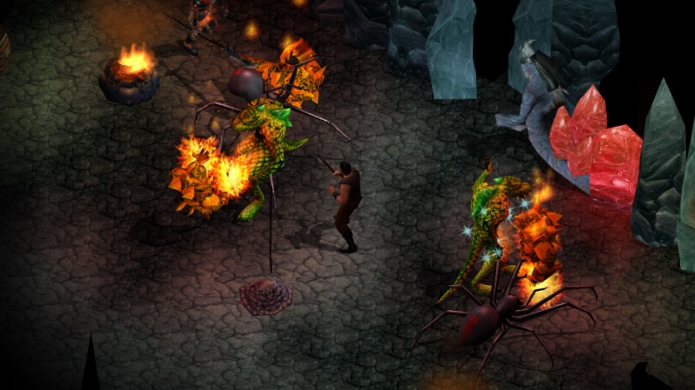 Many quests will revolve around the towns defence, these are handy, for sometimes you will be deep in a dungeon, battling the multitude of denizens and get notified of the town being attacked. Unless you can get back to the surface and help fight off the hoards, chances are the town will be overrun and you will fail.

Death is also possible, but this results only in an XP hit to your character (less, if you retrieve the Soulstone dropped when you die). It is this mild approach to failure that highlights the casual target market of this clickity-click RPG.

The loot system is extensive, with item rarity, dual weapon wielding, sets of legendary equipment, cursed and egotistical articles. There is also a system of pouches for storing items, and chests for storing personal items, as well as items for other characters you have on the go. So if your Priest finds a wizbang double handed sword that he can’t use, store it in the town chest for next time you play with the Warrior you are developing.

There were frustrations, such as being blocked from moving by unseen barriers, and disappointment in the sound effect system (though the music is suitable and high quality). The bottom line however, and the score below reflects this thinking, this is a wonderful, surprisingly deep way to waste those commuting hours, or looking as though you are really busy art work.
Latest Comments
Link