Is technology part of human evolution? If the technology to replace a missing limb or damaged heart is a wonder of modern medicine, then in the future, say around 2027, wouldn't the replacement be better than the original? With new legs to make you run faster, new arms to make you stronger, new eyes to see more, would it be evolution to improve humankind through science?

In the third Deus Ex you’re thrown into the deep-end of this debate as Adam Jensen, an ex-SWAT member in charge of security for one of the world's biggest bioengineering companies – Sarif Industries. As the public becomes more fervently polarised on the idea of human-controlled evolution, a brutal attack leaves dozens of employees dead and your body shattered; forced to receive mechanical augmentations to survive. In following the trail you will question the motives of your friends and your enemies as one twist follows another until you sort of get it but wonder what happened to all the little things that are brought up but lost along the way.

In winding your way through the myriad of twist and turns in Human Revolution you'll find that discretion is the better part of staying alive and avoiding long load screens. You'll learn to stay in cover, using the A-button in context to shift around corners and dive silently between cover in third-person view. Actually, you'll get really good at it because essentially Human Revolution is a travel game moving from location A to B. At least that's how it feels if you stick to the script and fly through the main missions.

If, on the other hand, you explore the different cities you visit, you'll experience much deeper game play. Dumped in the middle of Hengsha – essentially Hong Kong – an investigation of an argument can quickly turn into an agreement to rescue a kidnapped friend and kill their boss. As ex-SWAT you'll also find yourself popular when old friends need a hand to do something that might not strictly be within the purview of legitimate law enforcement. 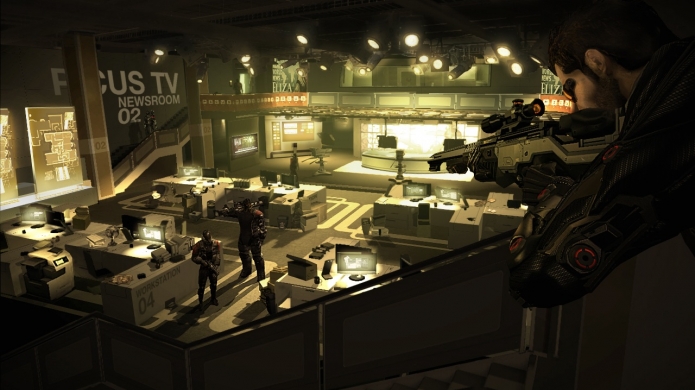 That said, moving from A to B is a lot more interesting, and addictive, than it sounds. There are multiple ways to approach an objective, at times some avenues will be closed if you haven't activated the appropriate ability. In the wider game world there are multiple entry points to every building either from above or below and finding vents will allow you to access new areas or circumvent more difficult areas, while upgraded hacking skills will let you reprogram sentry turrets and robots.

There is a huge sense of satisfaction in infiltrating an area unnoticed which is matched by covertly taking out soldiers and gang members. Some of the most satisfying moments come while crouched behind crates, laser sighted 10mm pistol with silencer in hand and then five seconds later, three headshots and three dead guards. The only thing to worry about is dragging their bodies out of sight.

The augmentation system is key to granting yourself new skills and abilities with experience points gradually awarding you upgrade kits. There are a number of choices to make on upgrading strength, damage resistance, hacking skills, stealth skills, eyes, legs and lungs. Some upgrades will be constantly active like improving your radar system, some are context sensitive allowing you to punch through walls and others can be activated like silent running, cloaking and the experimental typhoon weapons system. To prevent you from becoming too awesome most actions require energy to use and while you can upgrade your energy system, the limitation prevents you from running silently and cloaked through levels while performing takedowns at will.

Ultimately the idea is to upgrade based on how you want to play but given the emphasis on stealth and hacking it becomes more a case of upgrading to suit how you execute the hacking and stealth components. Mind you I did find a pastime of cloaking near a group of enemies before moving within range and dropping a frag mine at their feet. Sure the explosion defeats the whole purpose of having a cloak but, it's still fun.

The combat system itself is an interesting affair, an FPS that shoots better from cover and lets you perform silent takedowns. It makes the boss battles a bit of a shock as it's really the only time you need to run around like a traditional FPS, creating two disparate styles of play; one a calculated and precise approach and the other a frantic dash for survival with bullets sprayed wildly in the direction of your enemy. 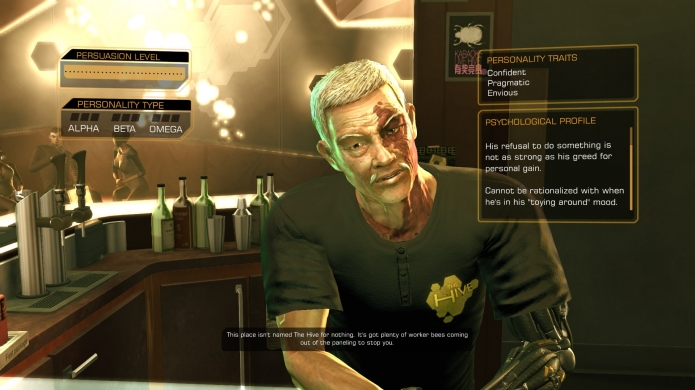 The environments tread a fine line between repetitive and attention to detail as many rooms are near mirror images although newspapers and ebooks that you find provide impressive amounts of information on current events of 2027 and detailed info on biotechnology, adding a depth to the world created. Different locations are populated by numerous NPCs that will give you a number of different responses but lack any interaction beyond that. Even though street food vendors ask for your order, you're given no option to respond. Given that the environments lack a real level of activity beyond people standing around it makes them seem overly static, detracting from your desire to explore and it's not until you leave Detroit that you're wowed by the conceptualisation of future cities.

There are a number of things Deus Ex does really well but the most impressive change to the series is the hacking system. The real-time system is more involved than utilising "tools" or following a sequence of buttons. Hacking requires you to override a series of nodes of varying strengths, each posing a chance of detection. If you set off the detection system it traces your entry point, which still gives you time to complete the hack.

You can also fortify nodes you have control of; slowing the hack while increasing your skills will make you more efficient at avoiding detection. In fact, it's a lot more involved than that as you can hack nodes that will slow the trace or make surrounding ones easier to hack, but it’s a skill that you really need to develop before reaching the back end of the game. Some might bemoan it as an intrusive mini-game, but given the real-time element it’s an added layer to the stealth aspect.

The visual approach is also something that strikes you with Human Revolution, particularly the opening sequence, and the musical score is also impressive throughout, cleverly understated for most parts and a fantastic pairing to the sleek visual styling in others. The drawback is that short scenes often appear simply to introduce a new aspect of the game, such as walking into the first medical clinic, which does nothing for the story.

At other times scenes could be more embellished yet it will switch to the real-time conversation approach which detracts from the story-telling element. In some ways the story for Human Revolution boils itself into confusion. After taking one step after another, introducing new element after new element the original setup is lost and the earlier elements cast aside haphazardly. 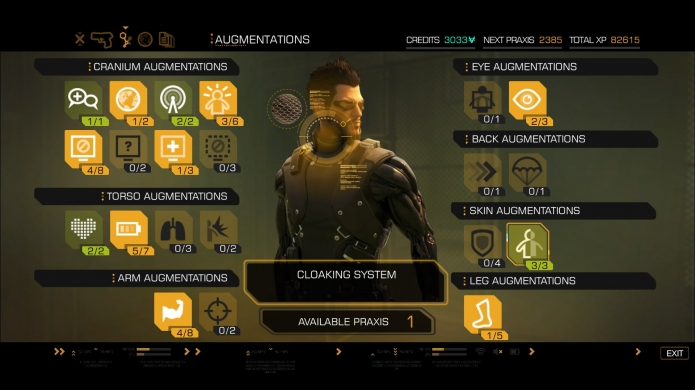 The problem this presents is that you end up completing mission objectives for their own sake, somewhat detached from the main story and the characters within. In a similar vein, the choices you are asked to make mostly don't eventuate as advertised. While you can make choices when locked in dialogue with a friend or antagonist you might save a life or gain an access code but with one notable exception do not come back to haunt, or reward you - that or my 50 odd hours of game play has yielded too many poor decisions.

Is Deus Ex awesome? Absolutely. Is it a giant leap in design? No, and how could it be? With other games offering multiple story paths and upgradeable characters Deus Ex no longer stands alone in its field, and it’s not perfect by any means. But, with the mix of different choices, multiple paths and wholly addictive game play mechanics it's hard to put down.
Follow Us
Latest Reviews
More...
News Feed
Advertisement
Latest Threads
Log In
Create Account | Lost your password?