With a chin that won't quit, and a burly voice that would put an amalgamation of Zap Brannigan and Adan West to shame, our hero, Mr Deathspank, has all the right visual and audio cues to imbue us with an immediate sense of his (self) righteousness, his heroism and his... ability to hammer the shit out of demons (literally) with a poop mallet (also literally). This sort of thing doesn't seem all that strange when the man behind the game is the genius behind classic Lucasarts titles such as Monkey Island and my personal fav, Maniac Mansion. And so Ron Gilbert brings his years of experience in delivering bizarre humour and great gameplay into the action/RPG realm, and damn it's good.

If you're anything like me, you're desperately waiting (and most likely salivating mana) at the thought of Diablo III (stop hating 'cause its colourful, they're magic spells. Of course they're colourful) and simply can't wait. But you have to. In the meantime, if you're looking for a lighter take on some good old point-and-click dungeon crawling, or in this case analogue-controller-and-button-smashing fantasy crawling, DeathSpank is going to make your day, and make that Diablo III wait that much more bearable. Never taking itself too seriously, DeathSpank's action/RPG oriented gameplay is partnered with humorous scripting, great voice-acting, and some of the strangest enemies you're likely to ever come across. 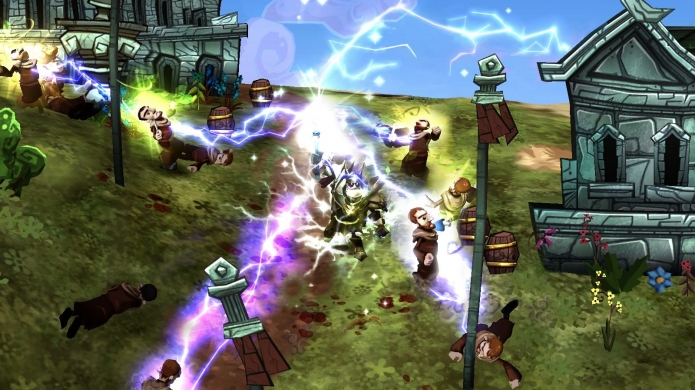 "The world almost ended once... due to a secret artefact. Known only as... The Artefact" informs the mysterious narrator as you begin your adventure on this XBLA and PSN title. DeathSpank feels like anything but a downloadable game. All conversations are voiced and with full voice-trees offering you responses ranging from the absurd to downright nonsensical, which just adds to the game's overall appeal and tongue-in-cheek style. Copious amounts of loot, a large world, plenty of side-quests and very little repetition of enemies means it's well worth your hard earned cash.

The voice-trees flesh out the story, but mostly provide entertainment with plenty of pop-culture references thrown in. Responding to the evil witch Ms Heybenstance (the first character you encounter) allows you to respond with answers - or questions - such as "Did you know I once danced with the Devil in the pale moonlight?" It's completely useless, but makes DeathSpank a better game because of it. Probing with random questions can sometimes yield you info regarding side-quests and hints on how you complete said quests. This is where the RPG elements take a grip and drag you along for a grand ride. Requiring a little more thought than the usual side missions in games, some simply leave you to figure things out for yourself, and if you get upset because you aren't very clever, instead of grabbing a FAQ online, you can use the inbuilt mission hints. These are instigated with fortune cookies dropped by enemies, or found hidden away. Pure Gilbert.

No RPG-esque title is complete without some kind of levelling up, but DeathSpank offers a bonus with each new level you reach. New levels grant you a selection of one of three gift/hero cards - each granting a different buff. Some allow you to use armour one level higher, some add attack damage, some increase your speed amidst much more to unlock. If you select a similar card on your next level up it adds to the existing card, buffing you that little bit more. You can't select exactly which abilities your XP is applied to but the cards remedy that. 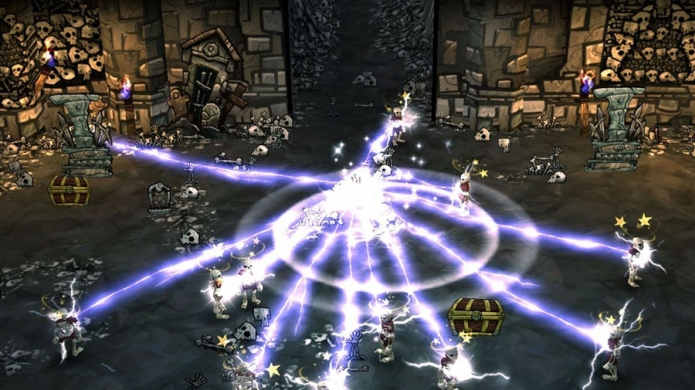 DeathSpank's imaginative humour is evidenced in your first mission. You have to save Ms Heybenstance's dragon hatchlings (the little ingrates weren't very grateful - they spent the whole time burning my armour instead) from vicious chickens. What else? And of course she requires you to collect their lips. Yep, according to the DeathSpank lore, chickens have lips. Pretty soon into the story you'll come across a cherry farmer requiring demon dung for his cherry trees, he hands you a poop hammer. Once you equip this hammer you'll realise it is weak. Very weak. It doesn't really do anything but cause demon imps to drop little steaming piles of dung, 'nuff said really.

The control set-up is excellent here, placing weapons, spells, and potions, within easy reach whilst knee deep in evil eyeballs, and dragon hatchlings. Each direction of the D-Pad and the four face buttons of your controller are assigned specific items, providing eight item slots. Ron Gilbert and Hothead Games cleverly bring across the ease and customisation that PC dungeon crawlers offer. Combo mechanics require the use of stringing together a different weapon for each consecutive hit. If you land a blow with the same weapon twice, your combos over. Having four regular weapons at your disposal means you can string together lengthy combos yielding vastly larger amounts of XP. If your adversary can take the punishment that is.

I'm such a sucker for collecting special weaponry, always hoarding away the items I can't use for lack of skill level. Encouraging the player that explores, DeathSpank quickly delivers all kinds of classic items you'll already be familiar with. But there's also a huge amount of new weapons such as the Chicken Cannon which help can deal with an ambush by those nasty spiders, or remove the giant villain at the Mating Rock. Also, removing the need to find a blacksmith to sell items, you can grind down elements for cash straight from your inventory screen, or combine elements to imbue special abilities. Within a short period my item list was overflowing with magic rings, axes, potions, crossbows and more. 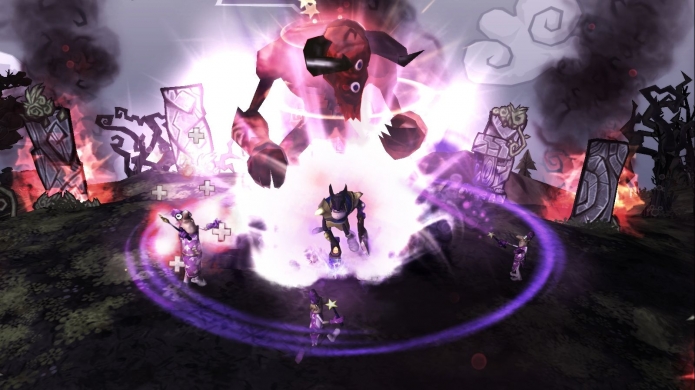 Deathspank ensures you're always at the absolute centre of the action, literally. The lush colourful world of DeathSpank moves around you as though you were traversing a giant ball. The horizon curves in the distance, whilst the 1950s style 2D scenery sticks up like an ancient pop up-book. Each area has its own distinct enemies, scenery and colour scheme. And yes, there are dungeons, it's not all slime pits, and forests.

Instead of being a Diablo or 'insert action/RPG name here' clone, Deathspank stands as an awesome and humorous romp with plenty of great NPCs who all have a lot say. It offers all the weaponry, spells and items you would expect plus so much more, along with a great sense of exploration and wonder in a fully realised fantasy game-world. Sure the side-quests follow a similar formula to what we may have experienced before, but it's a small issue in an otherwise flawless gaming experience. As the Wise Cow would say ".............."
Latest Comments
Link